‘I got my prize out at Nightingales’

Luke provides the inside scoop on a Tab night out.

I should explain. I did get my prize out at Nightingales, but it’s not what you’re thinking. Probably. 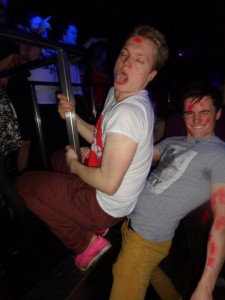 You see, the prize I got out was my Tab Award. Yes, Nightingales is a gay club, but it wasn’t on the night I went.

I went to ‘Motion’, the monthly sports night which sees the club magically transform into ‘The Hub’.

But before I got there, I went to a Dawlish RD flat for The Tab Awards. They were held in the house of Editor Rhino Lubin. Her real name is Rhian, but my spellcheck corrects it to Rhino, which is just too hilarious to change. The house was lovely – not rough enough to scare us away, but not award-show-glitzy enough to make us snort coke in the toilets. At least, that’s what the others said.

The first award was for Most Hits, which meant sitting through several minutes of listening to people who had more readers than me. Not that I’m jealous. Not that I’m burningly, horrifically Cain VS Abel jealous (law enforcement agents should read this as a metaphor NOT a statement of intent). Geniunely though, well done to the writers of Pre-lashing with the Rugby Boys, Brum Boys: Where to meet which kind of guy and Tab ‘n’ Fresh. 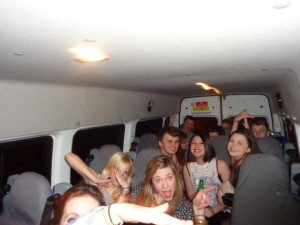 On the banter bus

I did win an award though: Most Censored Article. Ironically, this award was presented by the censor herself, Rhino Geobbles Lubin. Which is like Adele being given a prize for weight loss by Ronald McDonald. Or the gun dealer and inventor of TNT Alfred Nobel donating a Nobel Peace Prize in his name… OK, poor example.

After collecting my prize and downing my celebratory shot, there were only a couple more prizes standing in may way of  getting on with the more important business (read: drinking).

Pre-drinks were interesting and gave me a chance to see some people from The Tab I’d not met before. This included a guy who was bartending in Snobs the night six people kicked my head in. He was the guy a who warned the bouncers. Though clearly not quickly enough, because I can’t remember his name. 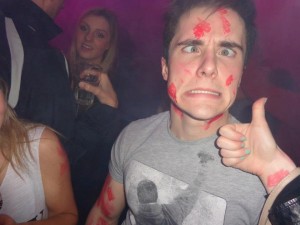 I’ll tell you what I do remember. I remember Rhino wandering around, whacking us with so many Tab stamps that there appeared to have been an epidemic of incredibly brand-conscious chicken pox.

On the minibus, I sat with Torn Pock (another spellcheck that should have been Torin Pocock and is very close to something far more painful). Together we were the back row boys. No, not the the Backstreet Boys; I doubt they have a “Pock” between them.

Once in the club, we did what all groups do in a club. We lost each other and wandered around aimlessly. I lost Pock and Rhino after about half an hour and decided just to drink. I walked all the way back to the Vale barefoot. Don’t feel too sorry for me though. I carried my shoes in my hand all the way, but drunkenly chose not to wear them.

My point is, it was an entertaining evening and the piece of paper telling me I won a prize is still with me.