Fab was evacuated on Saturday night after a fire alarm was set off, leaving Fab-goers stranded outside Mermaid Square in dismay

Students were evacuated from Fab on Saturday night at approximately 1.15am after a fire-alarm was set off.

It was rumoured to have been the work of a Southampton medical student (You don’t even go here!) and the whole of Fab was evacuated to Mermaid Square.

In true student style, the boozed up alter ego of the Guild known as Fab n Fresh, was left wondering what the hell happened on Saturday night. 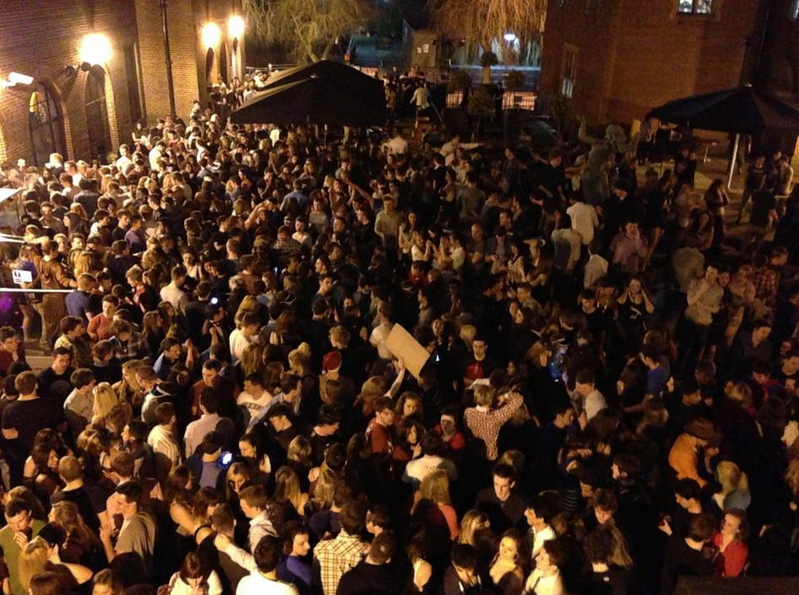 The scene outside the Guild during the evacuation

One Fab-goer described what happened: “At first we mistook the piercing shrieks coming from the fire alarm for some edgy dance music, but soon, one by one, we started to wake up to fact that this was actually the fire alarm.”

Students, who had achieved the feat of obtaining a Fab ticket and had not succumbed to the temptation of selling it for a profit, were left outside in the cold for 30 minutes. One member of the Tab team said, “You could hear the chants of dismay from the top of Dawlish road.”

Drunken sobbing and confusion plagued Mermaid Square, as students struggled to get to grips with what was going on. However not all students felt bad, as one admitted that “the relaxing intermission really gave me time to reflect on my evening so far”.

Staff at Fab were ‘unable to comment’ on last night’s event.

But the worst was yet to come, as on returning inside it was discovered that the DJ in the Underground had left the premises after the alarm, leaving students without music to skank to.

Luckily, student Jack Ford came to the rescue on the DJ decks in the Underground, saving everyone downstairs from having to grind on in awkward silence. Jack was one of the several heroes who saved the night.

Jack commented, ”It was pretty cool, I guess, and we recovered the night well. I think everyone enjoyed themselves still and that’s what is important!” What a hero- the Tab salutes you!

One student, who wishes to remain anonymous, commented, “Say what you will about Saturday night’s chaos but, my god, can the Guild organise an evacuation.” What a hoot the Guild are…

It seems that there was a miscommunication about whether students should have waited it out, or gone home.

Someone ended up in Roosters early

The Tab empathises and sincerely hopes that all Fabbers recover from this unfortunate event.