Redbull is my favourite Crack Dealer

This week, Luke’s on anti-biotics. Not one to miss a night out, he resorts to Redbull as a substitute to alcohol. 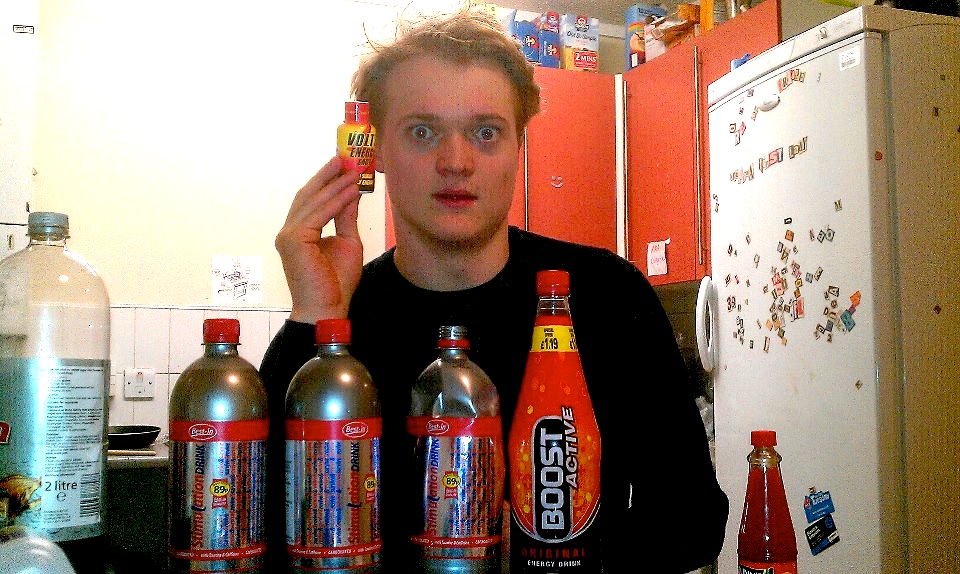 more wired up than a chicken-proof fence

Due to my inability to drive a trolley and my inability to walk on ice, my arms are cut and battered. And this means that I’m popping prescription pills Charlie Sheen style.

Now, apparently there’s this silly rule about not being allowed to drink on antibiotics. But I wasn’t going to let that stop me going out. Despite the warning of Fab N’ Sober, I tried Fab without drinking. I’d never realised quite how bad the music is before.

So, when it came to Wednesday and we agreed to go to Snobs, my favourite club/vice pit/herpes pool, I knew I couldn’t do it with a clear head.

But instead of drinking until I couldn’t remember my name, I went buzzed off my head on energy drinks.

Now, I should explain to those readers who don’t personally know me that energy is not something I lack already. On reflection, one shouldn’t give me an energy drink in the way that someone shouldn’t poke the Hadron Collider with a nuke.

But after adding 2 bottles of 89p Stimulation drink, a Boost active bottle, a Voltz energy shot and 3 cans of Red Alert I was, a bit on edge. Waiting for entry I’m pretty sure the bouncer shot me some odd looks. Not that I blame him. You see, I hadn’t realised how much of a laxative Boost is. So while others in the queue stood, I river danced.

The evening started interesting. Less than a minute after escaping the Snobs toilet, my first of 10 or so trips, a guy on the dancefloor told me “There’s something wrong with you”. It usually takes people longer to realise.

But most people were in a good mood. The dancefloor was electric. Wild. Explosive. At least I am told, because as soon as I got on the dancefloor I needed the toilet again.

Back to the dancefloor, via the bar to buy more Red Alert, and some more wild dancing. I moved like a crack addict.

The best part was that I can remember everything that happened. My favourite compliment of the night was “I’ve been to war, and you make me laugh”. I know I’m bringing my stand up to the veteran circuit.

It was a night of memorable sayings. A girl used the weirdest chat up line I’ve ever heard: “Do you have chlamydia?” I replied “Well no, but considering my piss is now a Chenobyl green, try someone else”. Well, I would have done if I hadn’t been rushing to the toilet. I’m pretty sure the toilet attendant thought I was his stalker.

The night itself was great.

The worst part was afterwards. I’m used to collapsing in bed and enjoying a 12 hour coma. Not on Boost. I lay in bed from four to eight, blinking furiously. Plus I gained a sleep deprivation hangover worse than any alcohol binge could produce.

Feel free to try it.