Leander ‘The Panda’ soon to be Extinct?

The Guild is at the centre of an alleged vote-rigging scandal tonight after a post on Spotted: University of Birmingham appeared to show Council members talking about how best to fix proxy votes.

The screenshot shows a thread between Vice President of Democracy, Leander ‘The Panda’ Jones, and other Guild council members. Originally a private message, it was posted publicly on the Guild Development Forum and then the Spotted page.

Members on the group were discussing who they had to hand in their collected proxy forms to for tonight’s General Meeting. Women’s Guild Councillor Hattie Craig, commented on the thread: “don’t hand in the forms where they voted against.”

One member later commented: “electoral fraud ftw”. Leander Jones wrote: “They will check the name but not the signature.”

Ex-VP Ed Bauer defended the Vice Pres. He said: “Why should they collect and hand in the votes of people who disagree with surely that is the other sides job. Also the other side had a lot proxies tonight suspiciously they all seemed to be favour of their positions.. so probably they did exactly the same thing as they are condemning.”

One Facebook user commented: “The funny thing is we’re paying this guy £17,000 to basically screw us all over. It’s a bit like paying for a beefburger and inadvertently getting a half a horse, only far less tasty.”

Another commenter said: “This is what happens when you vote somebody in because they’re dressed as a panda.”

Students were voting on a range of changes to Guild democracy, including the percentage of students needed to call a General Meeting.

Now read the Facebook conversation for yourself. Names have been censored. 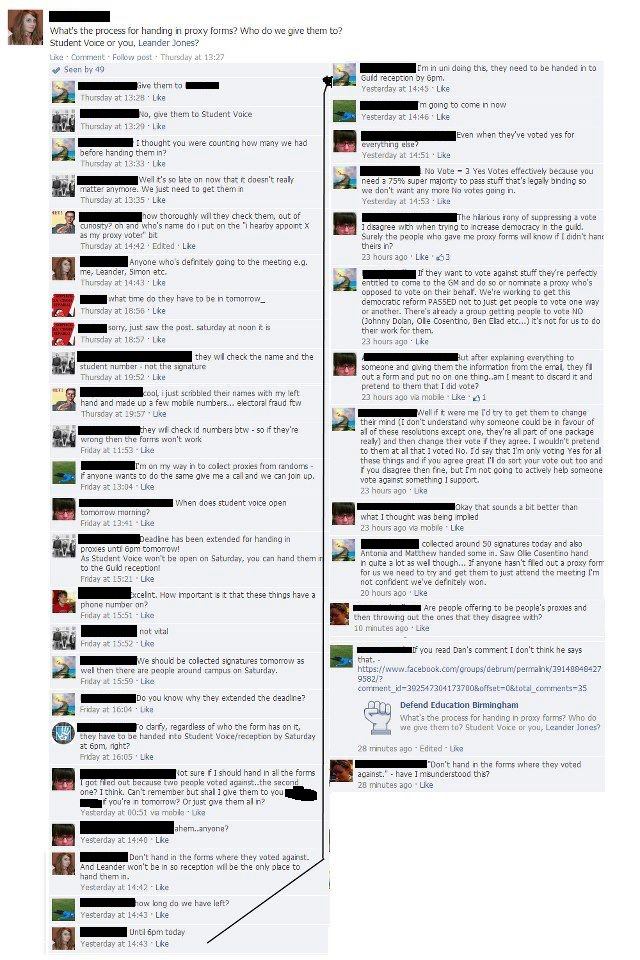