Last Wednesday saw the debut of Asphyxia, and it did not disappoint.

Last Wednesday saw the first gig by Belfast based music hosts Asphyxia. Like something out of a college movie, the night was amazing, providing a unique platform for the musicians of Belfast.

Hosted from a second story flat in Belfast, the party saw performers such as singer Sam Halleron, Newry band Cloakroom Q. and the newly formed Belfast act Dutch Tilt as the headline.

With doors being forced to close shortly after 9 pm due to the overwhelming turn out of people, the gig was rammed before a single act took the stage. 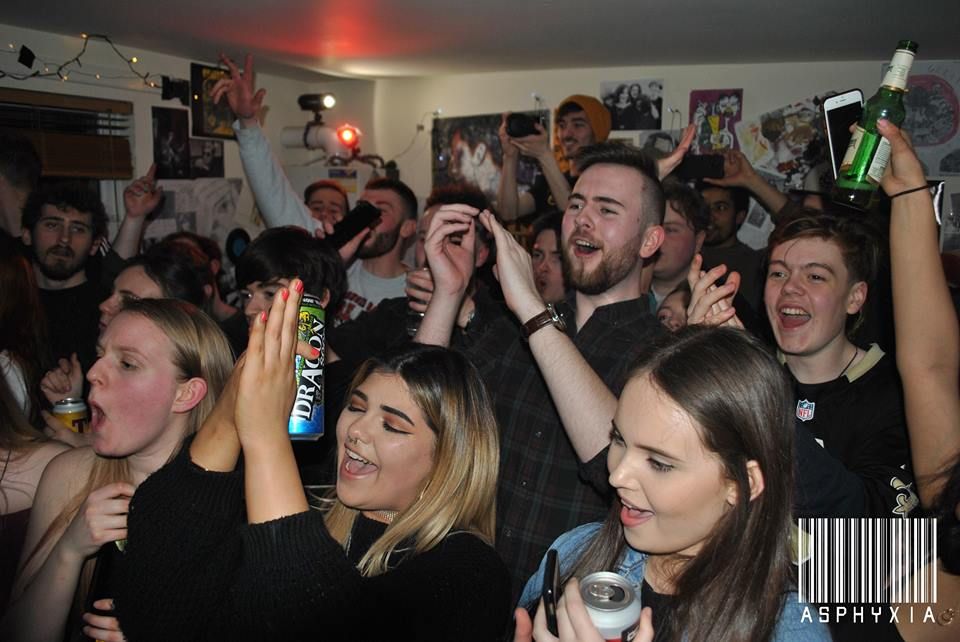 60+ people in one room quickly becomes a literal human toaster, but we didn't care

The crowd ranged from university students, to fans and friends of the bands, people coming from all over to see Asphyxia's debut party.

The fire escape became a safe haven for everyone during the breaks; stepping outside people got a chance to breathe, before going back inside to jump some more.

With the floor bouncing as high as the audience and warnings being made by the team half way through the night to watch the unstable floor, it was a miracle that the downstairs ceiling didn't cave in. 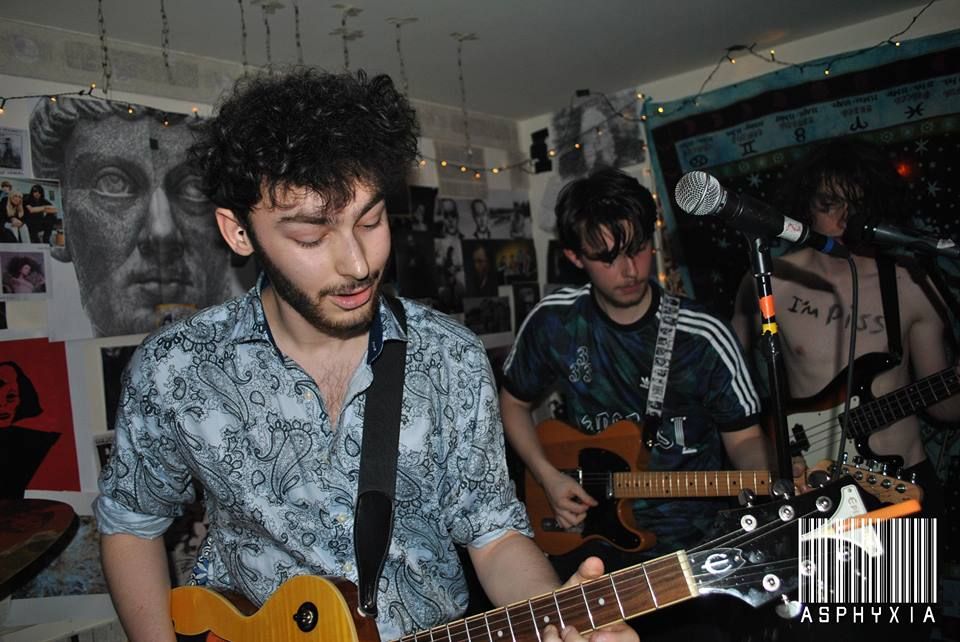 The night was almost a complete success, with nothing going too wrong until the interruption by the Belfast City council during Dutch Tilt's final song.

At which point the band rushed downstairs to confront the council, apologising but subsequently being shut down due to multiple noise complaints from neighbours, a charming end to a charming night. 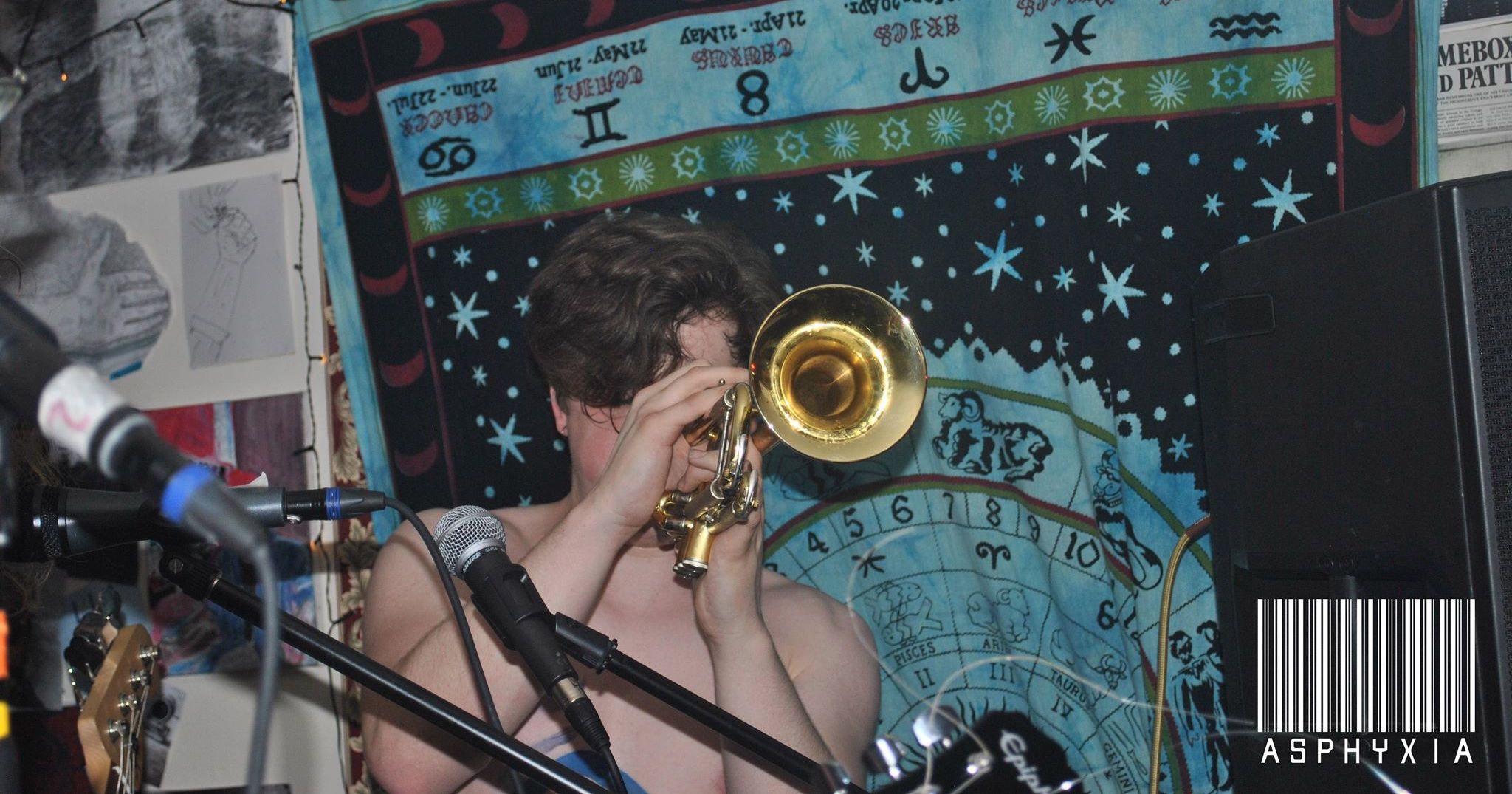 With over a month of planning and reliance on enthusiastic friends, Asphyxia was created to provide a unique take on the music scene in Belfast, something they intend to build upon in the future.

The party could not have been any more D.I.Y. with lighting being provided by people's parents and work places, the Queen's Film course and the many camera flashes that livened the room with character. 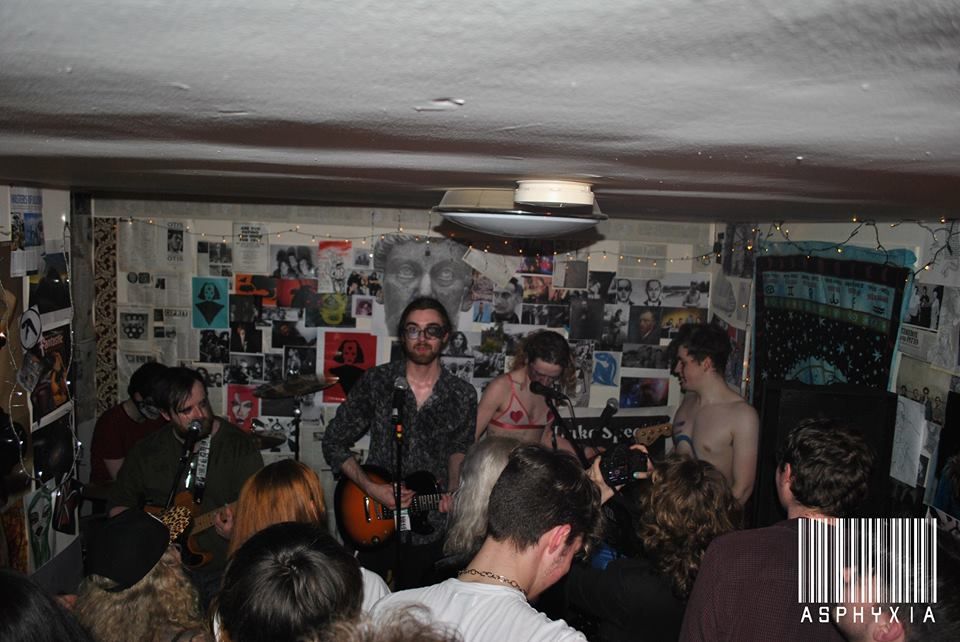 And above you can see the single most indie photograph ever taken.

People came and went from the flat the night before, taking their own artwork from home and University to be featured on the flat's walls. Hundreds of posters were also printed in the McClay Library and plastered across the walls; sofas and tables were dismantled and thrown into the second bathroom to transform a modest student flat into a jam-packed private gig. Yes, due to the structural integrity of the building it was invite-only occasion.

Asphyxia's own photographer was present to capture the moment, along with a sound team and people management to ensure the party didn't get too out of hand. 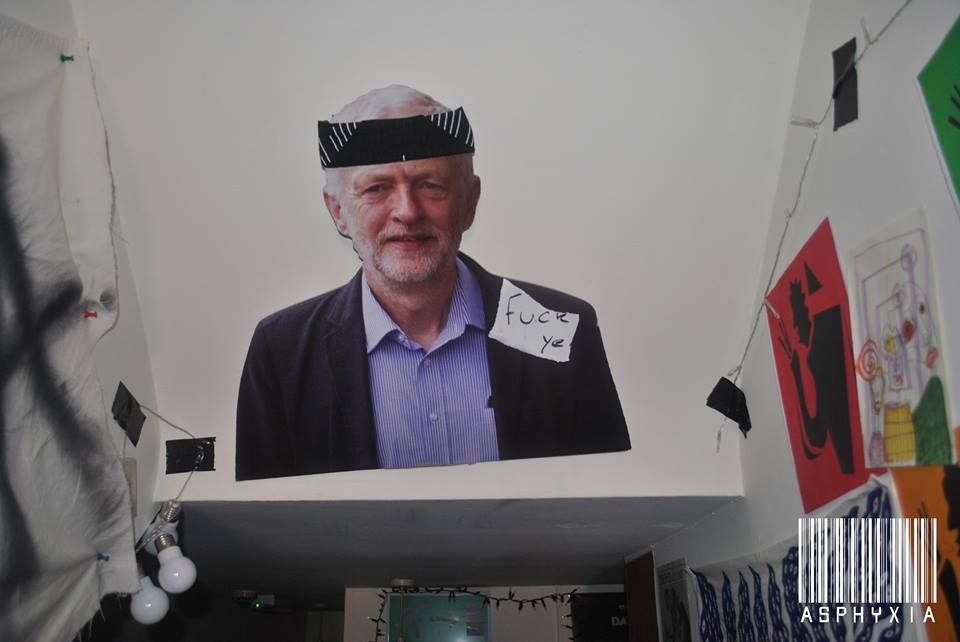 Having said that, poor Jeremy Corbyn found himself cut in half and taped to the ceiling

I began by asking, what exactly is this Asphyxia thing?

"Asphyxia is whatever you want it to be; a place for creators, writers, photographers, musicians, and artists.”

He went on to discuss their magazine that will exist alongside the up-and-coming gigs.

"We hoped to have the first edition out by mid-April and hand it out at our gigs, we have a ton of people writing for us, ton of people drawing and doing photography for us. It’s all a big group of people who know each other and bringing them together to do whatever they want.”

"We are a Belfast based music scene and promoter, we hope this is the start of something exciting; we had the best launch party anyone could have asked for."

How did word get around?

"Instead of doing a public event we wanted it to be exclusive, with word of mouth from friends of the bands and the film course, etc. So we had the idea to hand out personal invitations on business cards. We printed out fifty business cards with Asphyxia, Cloakroom Q. and Dutch Tilt printed on them, hand wrote the invited people’s names and handed them out at lectures to people we knew wanted to come. I was handing them to people to hand to someone else across the room. We wanted it to be a personal thing."

How much were you set back financially? 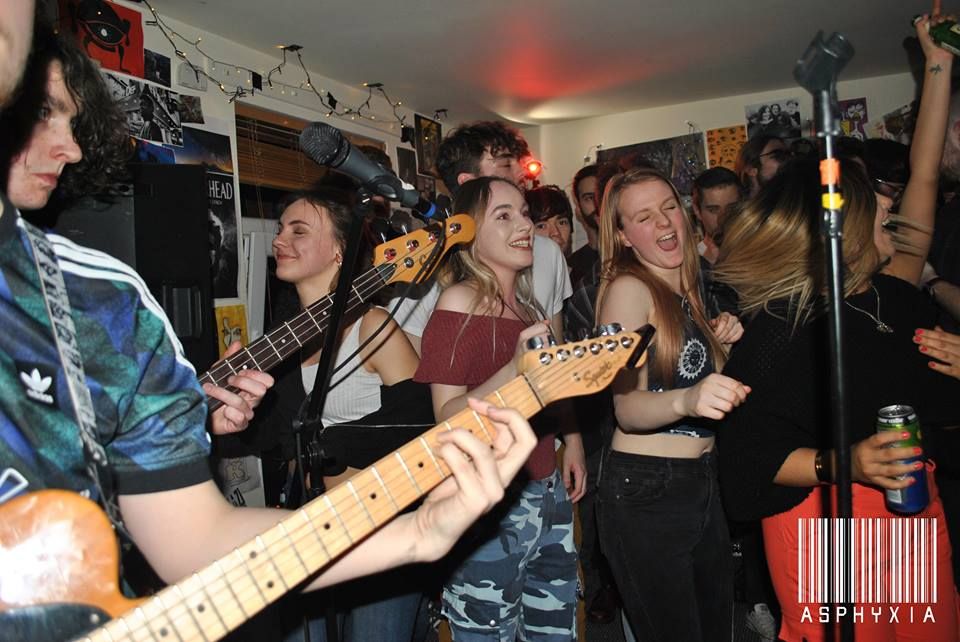 People enjoying themselves, before the council's kind visit.

Given they were on the second floor, the audience were only allowed to bring one or two friends max to prevent the gig getting too dangerous, with the cut-off point being 65-70 people. “We stopped letting people after nine, with a few exceptions.”

“Overall the night was a success.”

“We were thinking of next time just doing an unplugged acoustic set because of how loud the last one got.” 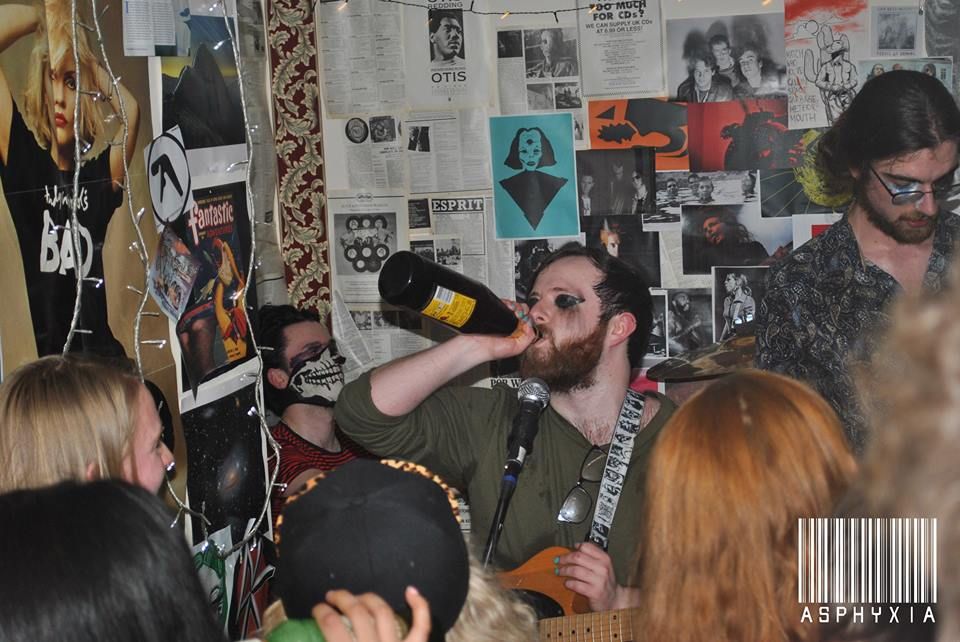 With live gigs becoming more and more scarce as years go on the consensus among the screaming crowd last Wednesday, from the living room of a student flat, was that these kinds of venues are what people want and are starved of in Belfast; hopefully this is the beginning of something special for the music/ art scene in Belfast.

See you at the next one.