We spoke to Toby Vinson, QUB student and panelist on Top Table

He is determined for young people to have their say

BBC One Current Affairs programme, The Top Table, has returned, giving young people the opportunity to voice their views on social and political issues.

It is the most frustrating paradox of being in your late teens to early twenties; you are criticised for not being concerned about political and social issues, and laughed at when you do voice an opinion. The Top Table "puts young people at the centre of the debate".

The first episode of the third series premiered on Wednesday, and sitting to Nolan's left was Queen's student Toby Vinson, in his second year studying International Politics and Conflict Studies. I asked him about his experience on the show.

Toby's reputation landed him a seat on the panel

"I didn't formally apply at all" he told The Belfast Tab, admitting that one of the production team, Thomas Copeland, knew him from the Queen's Literific Society, where Toby has spoken on issues such as Israel and Palestine.

He describes himself as having "always been on the fringes of the political sphere" and was invited by Copeland to feature on a podcast discussing Brexit. From there he was invited to take a seat on Nolan's Top Table Panel.

However anybody can secure a place on the show, the only requirements are opinions and a willingness to voice them. Most panelists are selected after emailing their interest to the production team. 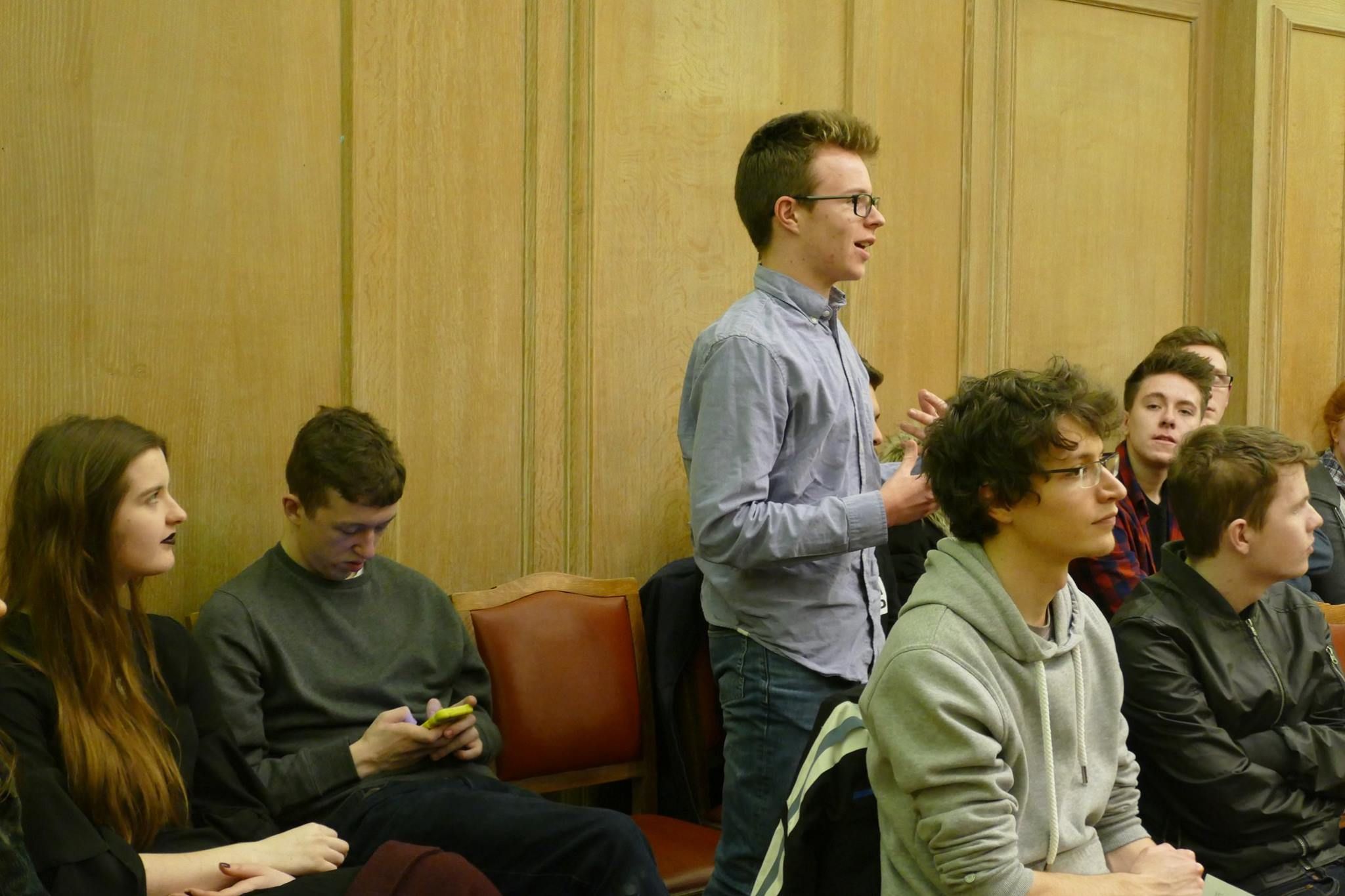 Toby is a member of the QUB Literific Society

He was quite in his comfort zone

In the episode, Toby is confident, articulate, and not phased by any of the questions fired at him; he is more than happy to give those two or three times his age a quick-witted comeback, and hold them accountable for their comments. As it turns out, Toby felt right in his comfort zone.

"It was obviously somewhat daunting when you got there" he said. "It all becomes very real. It goes from the podcast, which was all very relaxed, there was no-one there, just some recording equipment and ourselves. But there's a certain feeling once you step in front of a live studio audience, and you have the lights, the camera, you're being taken for makeup and told not to say anything of a defamatory nature, you suddenly become very aware of yourself."

He told The Belfast Tab: "I found the experience itself really exciting. I love the cut and thrust of a good debate, I wasn't at all intimidated by these established politicians sitting across from us. You should absolutely respect them, but I think it is the duty of every citizen to ask them hard questions and make sure they are giving you answers."

He believes in men speaking up for female reproductive rights

Arguably the most heated debate of the night surrounded the topic of abortion rights for women in Northern Ireland. Toby told me he can't stress enough how important it is that men, such as himself, join in the discussion.

"This is an argument first and foremost for women. At the end of the day it's a woman's right, and a woman's final choice as to whether or not she has an abortion. What we need is diverse, inclusive groups coming to the government saying 'we are from all walks of life, we all believe in this, it's time for you, as our representative, to step up to the mark and take action'. A man's argument should never be a commanding one, but it is important to join the conversation."

The Top Table returns tonight and we have three heated debates to get stuck into. Now available on BBC iPlayer

If he could choose his debate topic, it would be secular politics in Northern Ireland

"I think fundamentally that's something I'd really like to change, and I think the best way to do that is opening up a debate. The Top Table is a show, not for changing the minds of other people on the panel, but for advertising your views to the audience watching at home. I would reach out to them and say create your own moral guidelines. People should be independent in their beliefs and viewing politics from a policy perspective, not a religious one."

He recognises the need for fresh voices

"In terms of me being a regular panelist, I largely think that people in Northern Ireland don't really need to hear an English guy tell them how to do things all the time."

Toby admitted that, if invited, he would potentially agree to appear on the show again, but he stated that "all the time new voices need to be coming on, and I think it's really important that this is from the Northern Irish, for the Northern Irish."

Toby describes politics as a "very greasy pole", and is skeptical as to whether his path after university is a political one. The hand-in-glove with business approach taken by so many politicians sours the prospect for him.

"If I ever considered pursing a line such as this, I would make damn sure that my policy was first and foremost from the people, and about the people. If that makes me sound like a populist then I suppose I am to some extent, but I hope a populist for good."

Wherever the future takes him, I am sure we will be hearing more of Toby Vinson.

From south London to South Armagh

The Top Table is available to watch on BBC iPlayer.