Queen’s girls have been told not to wear short skirts or show off their cleavage at graduation ceremonies, with a new style guide that says it’s “out of the question” to wear revealing clothes.

Students have reacted angrily to the former architecture student, Thom Dickerson, who shared with them during the registration process for graduation. In a section titled “‘Style tips for graduation week: Wear it well”, graduates were met with advice like “Think Grace Kelly, not Kim Kardashian”, according to the Belfast Telegraph.

Mr. Dickerson’s Belfast based private tailoring company follows a ‘brand vision’, “Fashion shows the world who we are; but more importantly who we aspire to be”, and he echoes this with his opinion,”Short skirts and cleavage on show are totally out of the question” and says “Possibly the biggest mistake I see at graduation is girls treating the event like a night out”.

But his advice is not just confined to girls; he tells boys “stick to leather and dark shades” when picking shoes, and to all students, he gave guidance on how best to match your colour palette to your hood and gown. 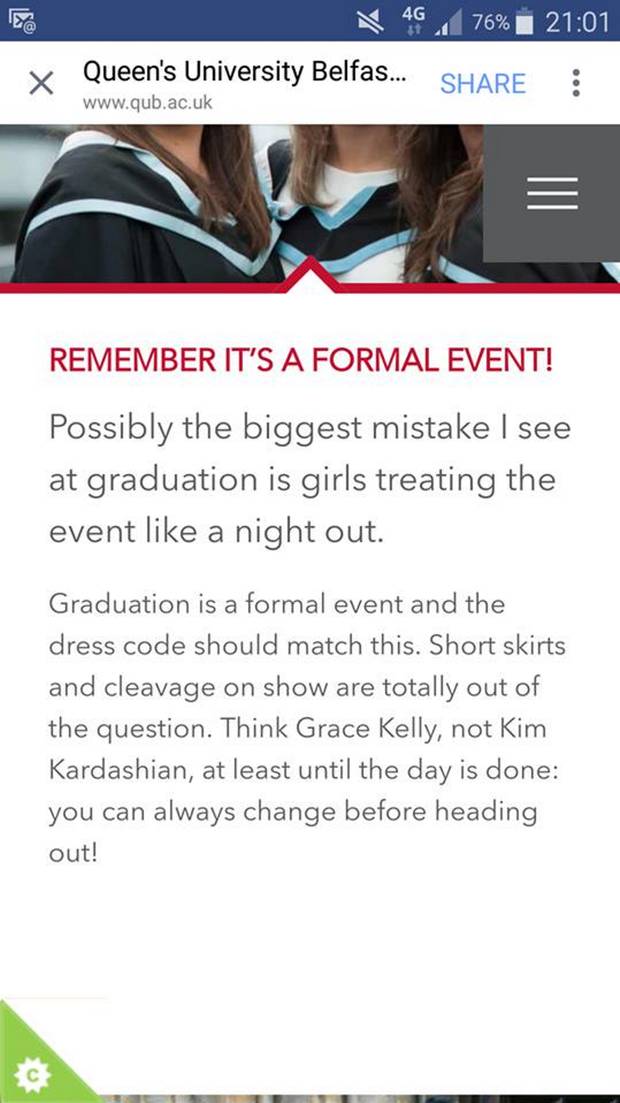 A screenshot of the advice – with thanks to the Belfast Telegraph

The reaction from the student community has not been soft, and in an email quoted in the Belfast Telegraph, a post-graduate said “Isn’t that the same old, same old we’ve been trying to rally against for years now?” going on to say, “‘cleavage on show’ being ‘totally out of the question’ feels like a piece of advice that would have been handed down to girls in a convent.”

After describing the advice as “utterly deplorable”, she concluded: “Are we not a bit more mature than making cleavage out to be ‘bad’ or even ‘sacrosanct’? I feel massively condescended to and genuinely offended to be offered this advice.”

In regards to advice directly from the university, Queen’s says: “While the university does not prescribe what style of clothes should be worn…graduation is a formal ceremonial occasion marking an important achievement and stage in a student’s life” and specified, “Jeans, T-shirts, trainers and other casual items of clothing are not considered appropriate”.