And abseil them out of the window

Bath University students occupying their Vice Chancellor's offices are being forced to pee in bottles as security are denying them entry to campus toilets.

The students have now resorted to getting rid of the bottles by abseiling them down a pulley system to students on the ground below.

The occupiers, including four female protesters, have been in the office without food, drink, sleep or toilets for almost a day, and are told if they leave to relieve themselves they will not be allowed to return.

Security have also been leaving windows fully open in a bid to make the protest uncomfortable. 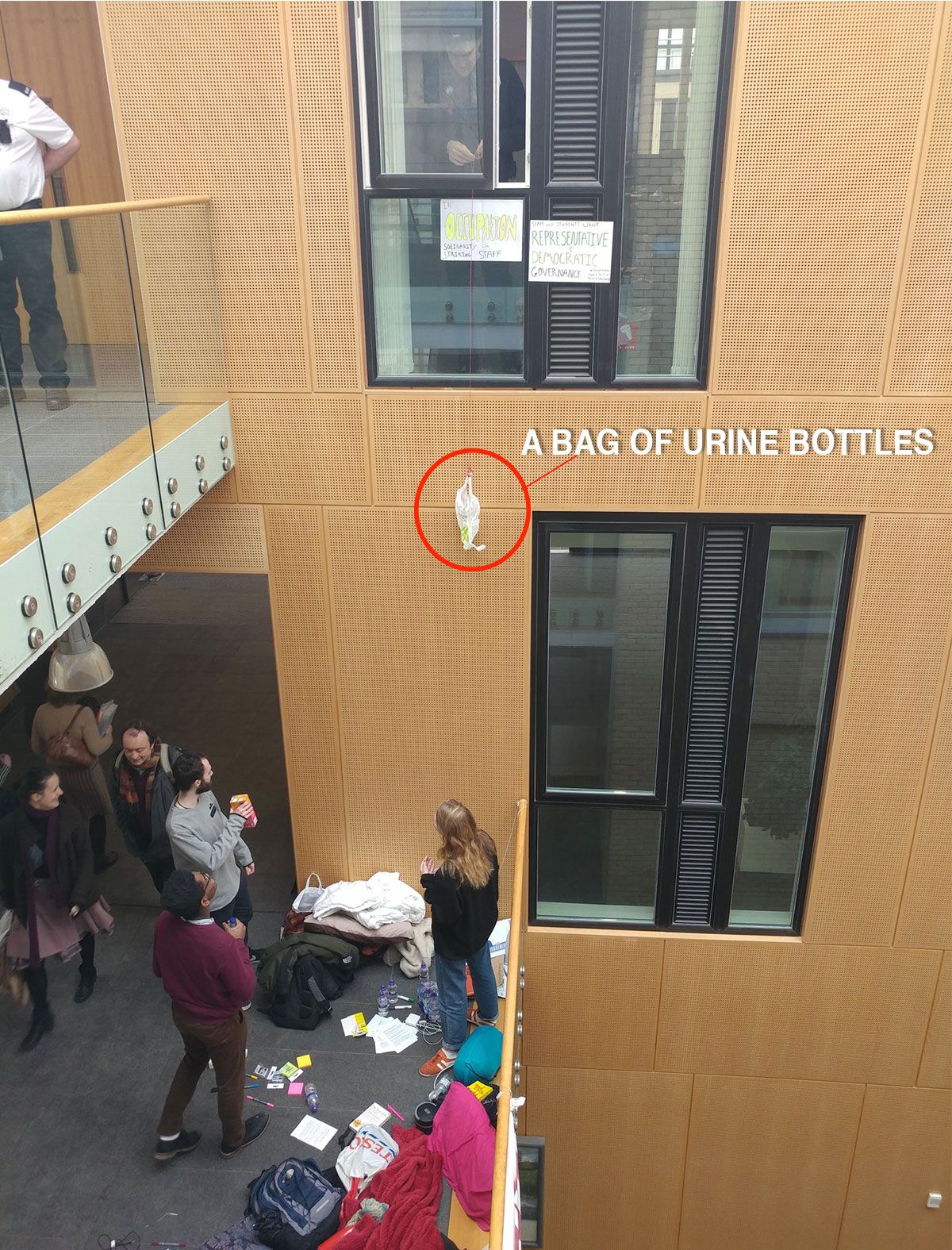 As a crowd of 15 supporters gather below, the occupiers have devised a pulley system out of the window to get food and water.

The string is passed down, and supplies are attached to it for the way back up.

However, the makeshift system is also being used to get rid of rubbish, including the bottles of pee. Chris, one of the protesters inside the room said: "It's quite a surreal experience, and not one I expected to have at university".

Despite this, they aren't deterred from their occupation. Chris said: "You've just got to grit your teeth and do it. You don't want the occupation to fall apart because you need the loo."

One of the four female protesters also inside the room, Jay, said: "The experience wasn't very dignified".

Ollie, a third year Politics and Economics student involved with the protest, called the situation "appalling".

From the start of the occupation at 1:30pm yesterday, until around 10:30am this morning, protesters were blocked from using toilets inside the occupied zone, and not allowed to re-enter the protest if they left to relieve themselves. 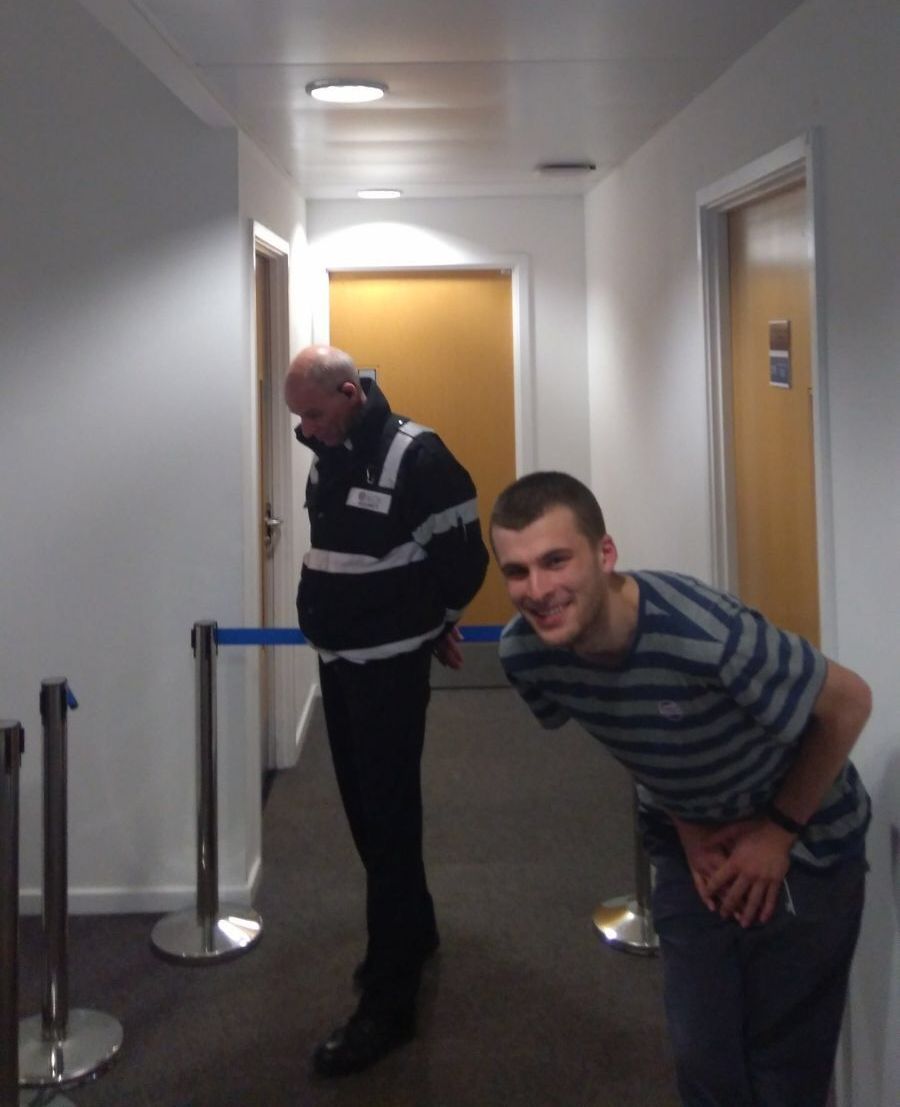 It's one of a series of ordeals, along with open windows and only getting two hours' sleep, facing the students occupying the VC's suite in support of the UCU strikes.

Six remaining protesters are occupying the series of offices, with a further 15 waiting outside, in pursuit of three demands: for the VC come out against the proposed pension plan and resume meaningful negotiations, for money from docked staff wages to go towards mental health services, and for greater student representation within the university.

However, they allege that the university's tactics are designed to force them out. 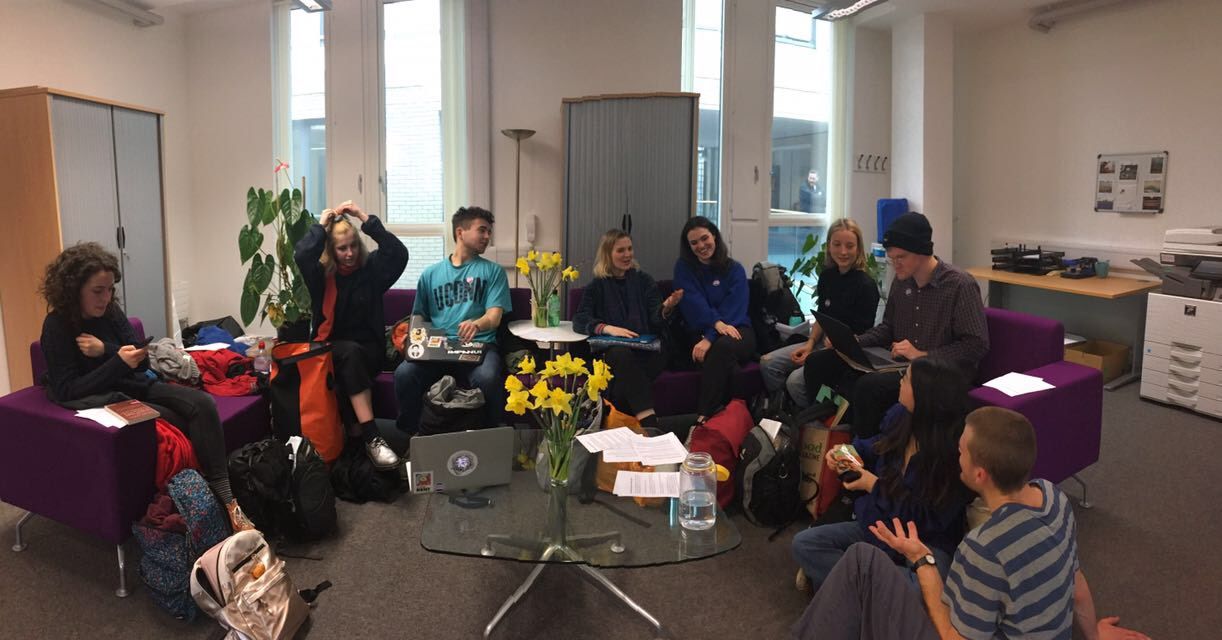 Chris says going to the loo in a bottle is "very far from ideal, but you've just got to do it."

The occupiers use a pulley out of the office window as their system for getting food in, but at one point it was "used for getting empty bottles to piss in," as well as more food and water.

They also used it to "abseil our rubbish down" to the crowd of supporters outside, including the now-full bottles.

So, in summary: management withheld toilet access to the occupation for 21 hours, preferring them to abseil piss-filled bottles down into a busy corridor. The state of this university. @UCUBath #occupyBath #USSstrike

Chris describes the scenario as "quite a surreal experience, and one I didn't expect to happen at university." Female occupier, Jay, who only gave her first name for fear of retribution from the university, says that having only male security guards in the room for the first stint of the occupation made the toilet situation uncomfortable.

Female security guards replacing the male ones made things a bit less awkward, but Jay says "when it got to the daylight hours it actually wasn't okay any more, as there were staff working in the room."

Jay describes the university's stance as a tactic to get the occupiers to leave. "They said you can go, but you're not allowed back in," she says.

However, as that would defeat the point of the occupation, the protesters resorted to relieving themselves in bottles. "It wasn't particularly easy, especially as we have four females in here," says Jay.

"It wasn't very dignified," she adds. 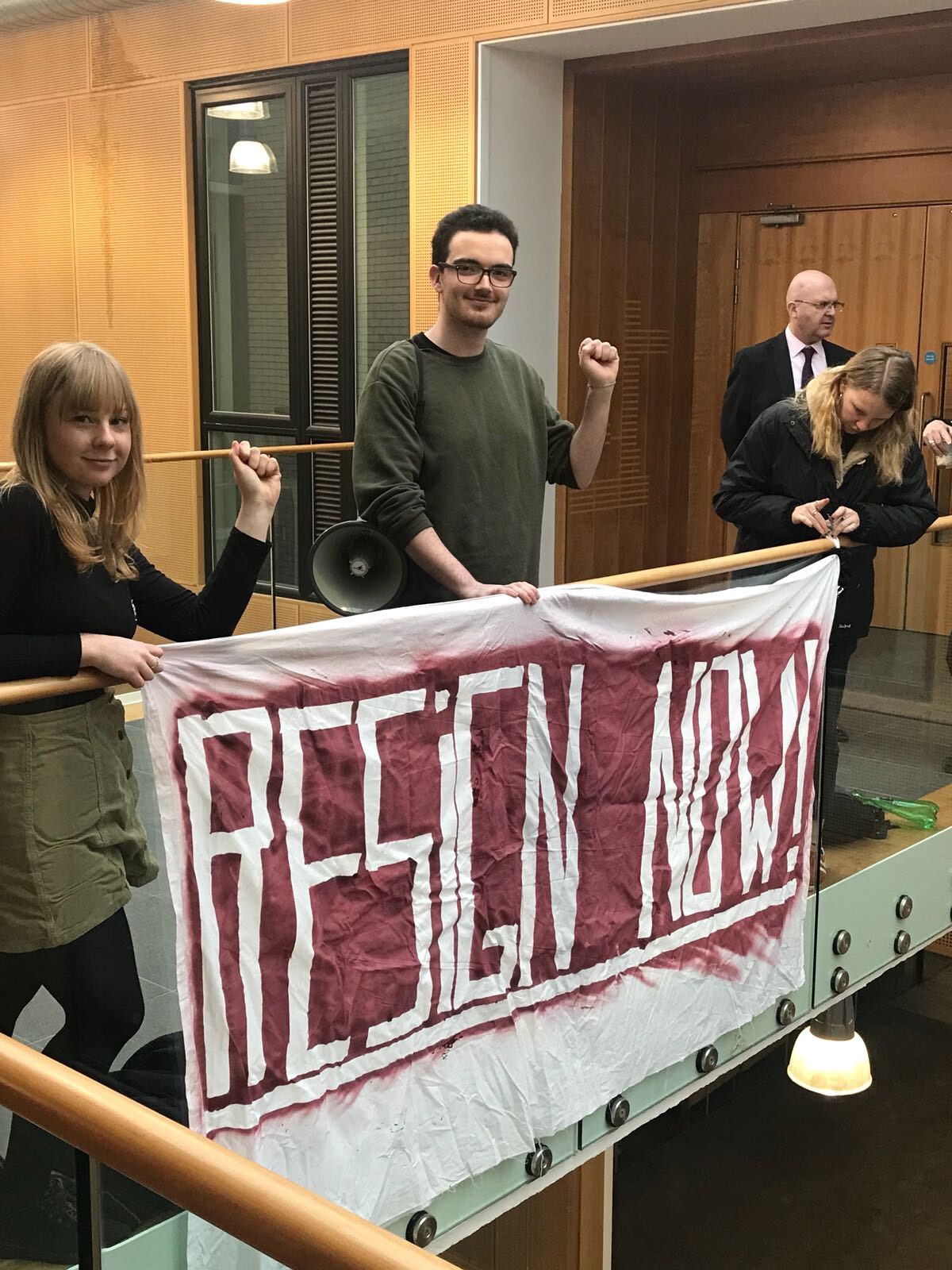 On top of this, the protesters have been limited to only two or three hours of sleep each. Lights were turned on by security at around 10pm, and windows were opened an hour earlier. Although staff said it was to let the smell out, Chris says he was "very confused."

SU Officers have been over to support the students at the occupation of 4W. After talking with the protestors we spoke with the Uni & now students are able to use the toilets and come back in afterwards. The SU is a big advocate for free speech and students’ right to demonstrate.

Then, from 5am, as cleaners entered the building, there was "very loud chart music" playing on speakers.

With their lack of sleep, the tired occupiers are wanting others to come and replace them.

Large crowds have gathered outside the building in support, and the occupiers are determined to carry on for as long as possible, hosting teach-outs and speeches.

A spokesperson for the University of Bath said:

“A group of around 10 students gathered in one of our buildings at around 13.30 on 5 March 2018 to express support for staff who are taking part in industrial action called by the UCU over plans to reform the USS pension scheme.

"We understand this is part of a nationally co-ordinated demonstration with similar actions taking place at universities across the country. We fully respect the right of both students and staff to make their voices heard.

“The University of Bath is supportive of the meaningful negotiations taking place between Universities UK (UUK) and the University and College Union (UCU) through the industrial conciliation service ACAS. We have also met with the UCU locally.”

Update: The occupying students have negotiated for the sit-in to continue indefinitely

In a statement, the occupiers told The Tab: "Occupying students negotiated with security and senior management so that the occupation could continue under much improved conditions in the Vice-Chancellor's suite.

"We have managed to secure open access for six students at any one time to occupy.

"The sit-in will continue indefinitely until student demands are met."

● King's College London is evacuated after balaclava-wearing protestors disrupt a talk with smoke bombs and a fight breaks out.

● As a serial defecator strikes a halls of residence, stunned students are left to deal with a smelly mystery.