The 21-year-old was studying journalism and dreamed of being a news reader on TV – something he fears he may now never be able to do after the brutal assault.

Scott Melvin, also 21, escaped jail time after admitting savagely punching him in the face and tearing his ear off with his teeth.

He pleaded guilty at the Aberdeen Sheriff Court to causing severe injury and permanent disfigurement.

Brute Melvin was ordered to pay £3,600 to his victim and undertake 200 hours of community service, but still remains a member of the armed forces.

Peter had to attend 50 medical appointments and have reconstructive surgery, describing the pain as the “worst” he’s ever felt.

Speaking to Northsound News the third year said: “I feel that the injury itself is serious on its own, the factors coming after the injury and the 50 medical appointments that you attend and regular operations and procedures and that it won’t ever be back to normal. 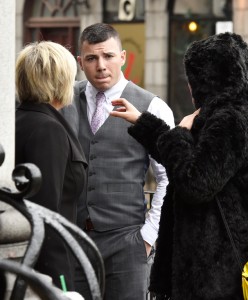 Social workers will supervise Melvin for the next two years and he will move from full-time service to the territorial army to enroll in college education.

He is still a serving member of the British army as he faces no disciplinary action from the armed forces.

Speaking to reporters after the court case Peter said: “I think it’s utterly disgusting the army has continued to employ him despite the fact he pleaded guilty last month.

“The British Army are supposed to protect people and this gentleman clearly hasn’t protected someone, he’s harmed them.

“A custodial sentence wouldn’t have put my mind at ease but I definitely believe that it would have been deserved in this case. I’ve seen people go to jail for a lot less.”