There was a lot of spewing

When you live at Hillhead, and have no choice but to shop at the local, don’t be surprised if your body rejects your lifestyle choices. 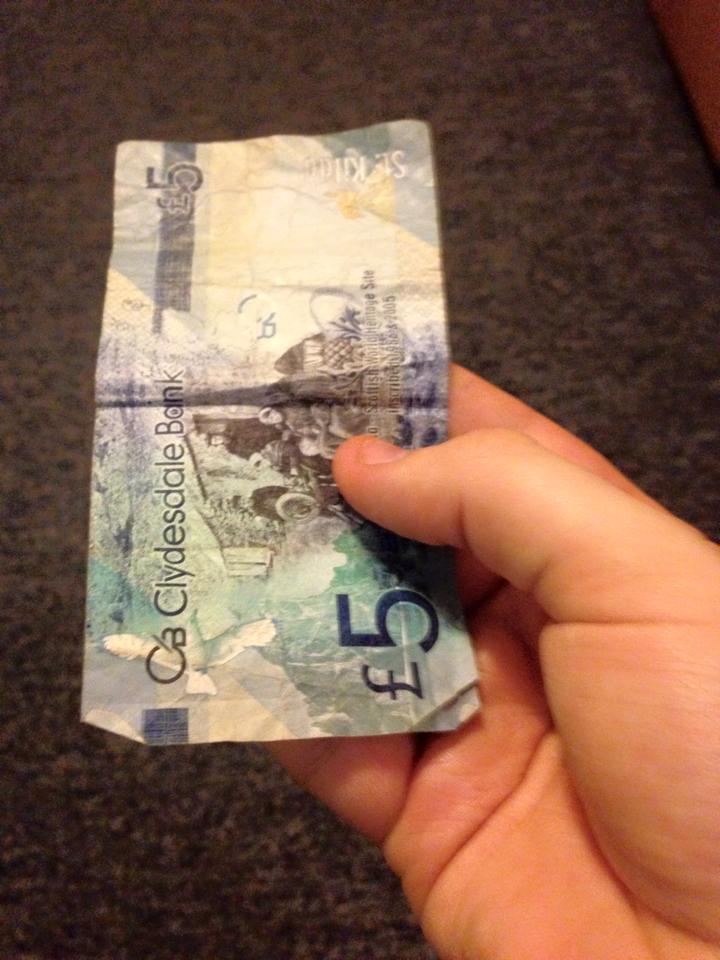 This is all I have left, Mr. Landlord

These two things pose a challenge, so myself and some friends resorted to drastic measures to do some research: we spent a night on the cheapest booze we could find.

Our aim: To see where your money will best spent if you’re looking to get drunk and are 50 quid into your overdraft.

The cheap, though not necessarily cheerful shop offers an abundance of boozing options. With our drink of choice in mind, we took a trip and purchased the following:

(The table makes it look like an actual experiment.)

Taking notes on my iPhone, which became increasingly harder to type as the night went on, we discovered the effect the booze had on us. 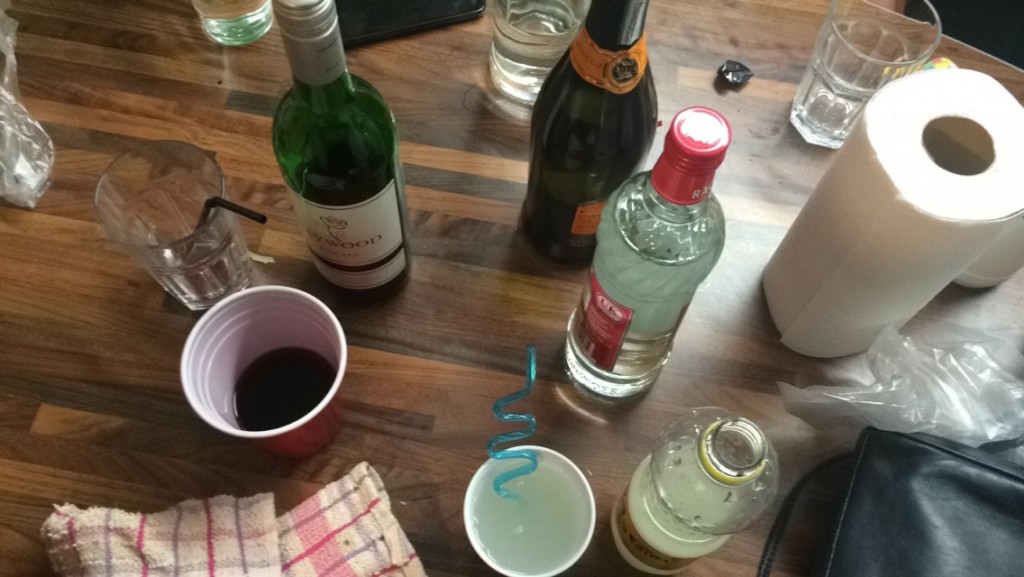 Red wine had a disappointing start, with my friend complaining: “I started drinking at nine and I don’t feel anything… apart from my oesophagus, which is burning. Okay I’m tipsy.”

The lucky soul drinking gin had an uneasy start, claiming: “I’m not looking forward to this.” 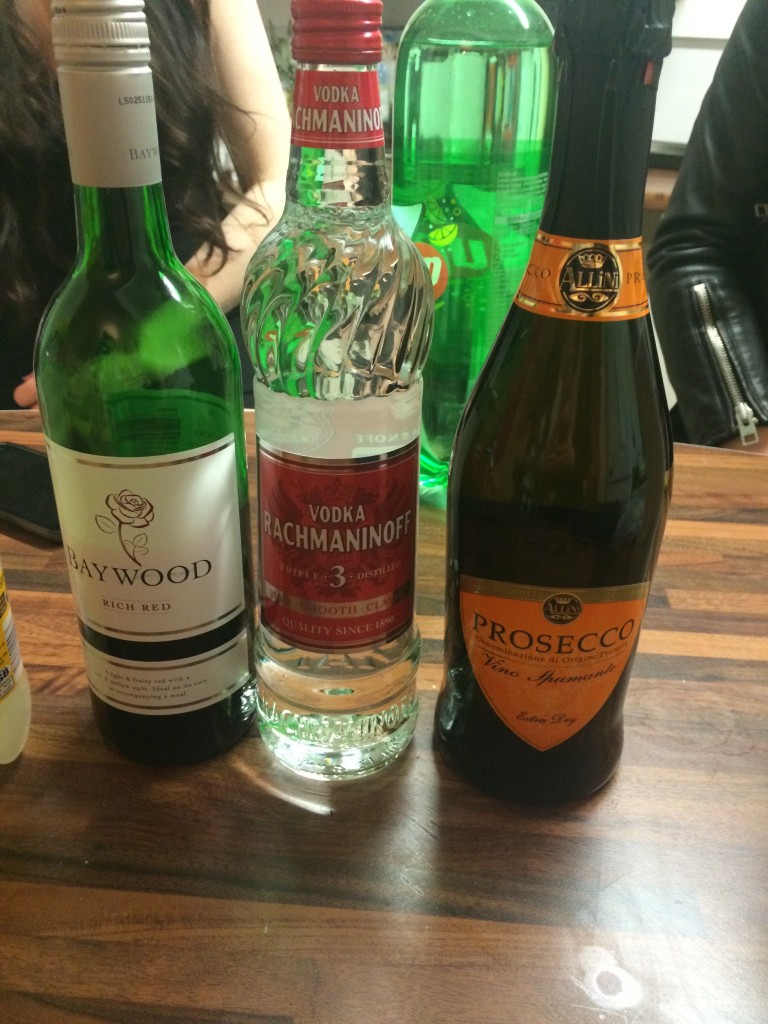 The labels make them look classy, do not be fooled

My prosecco loving friend was not loving the quality: “I’m gonna be sick, this is disgusting.”

As was expected, vodka was winner in terms of getting me pretty damn drunk. 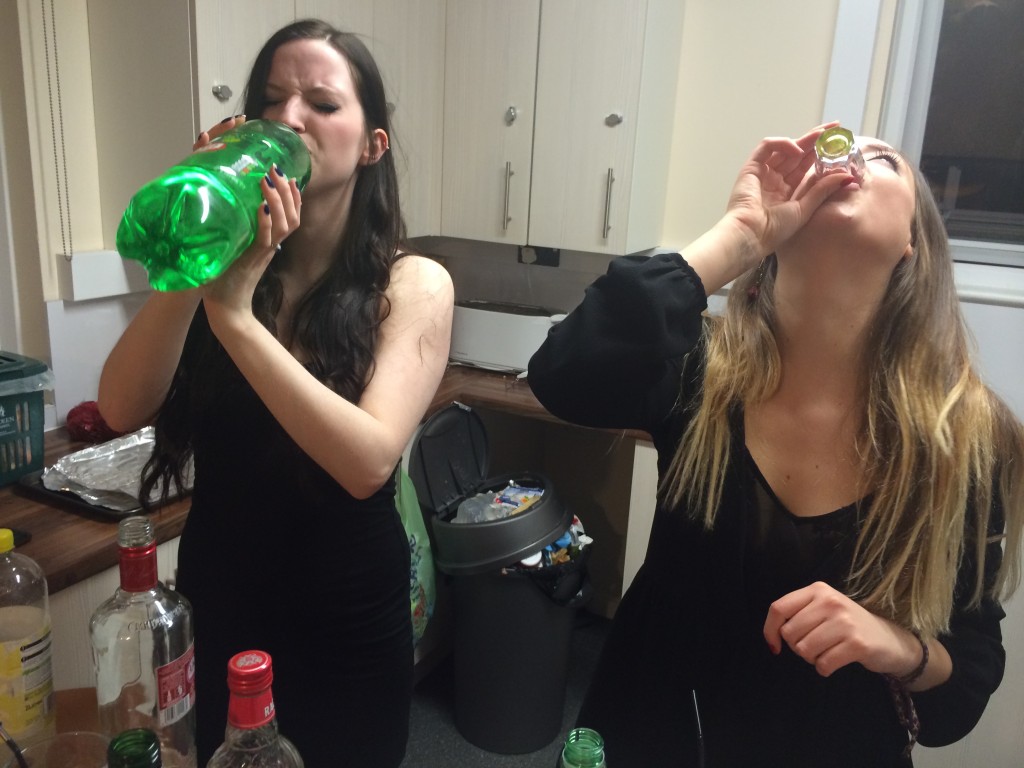 Rachmaninoff doesn’t go down quite as easy as Belvedere

The result of this meant that by 10.14pm everyone had begun to dip into my vodka, doing a shot of Rachmaninoff every 15 mins until we left at 11.30pm. 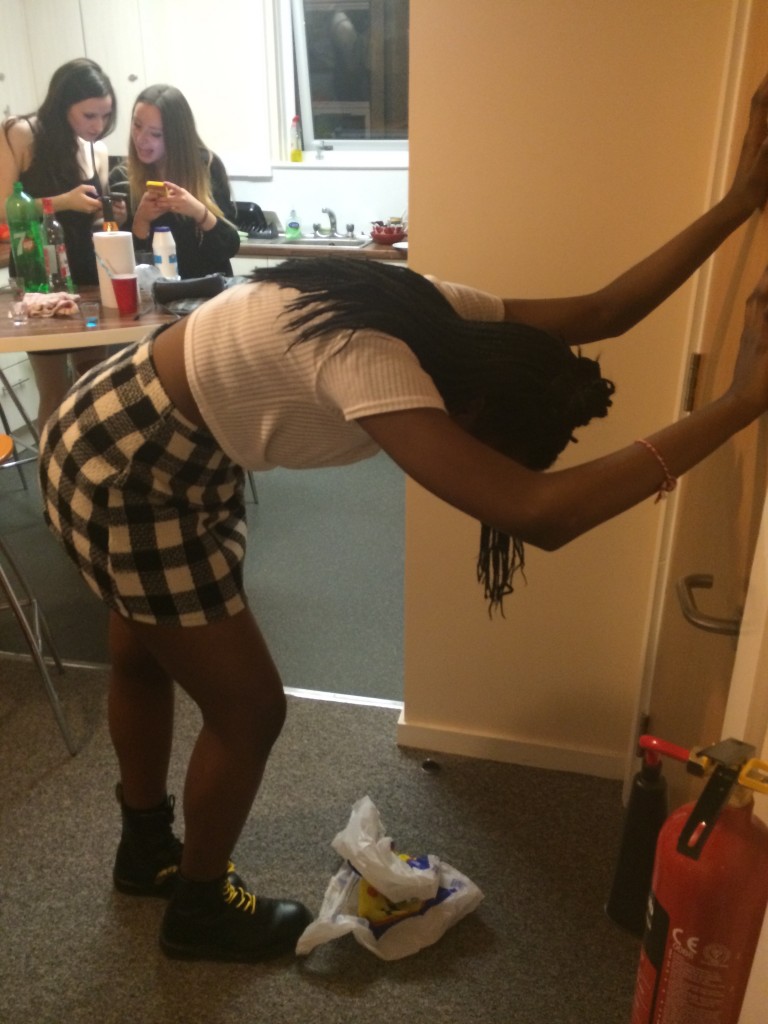 It was too much for one soldier

At which point, we all made it out the flat, (almost minus the one who nearly spewed).

The information learned at this point: always have vodka on hand.

The bus ride became another obstacle in the night, when the only seats available were the ones facing sideways. The rocking back and forth didn’t do much to sober up our already spinning heads. But we championed on and no one spewed on the bus.

Somehow, we all made it into the club.

We don’t know how we did it either.

Especially after being confused by the ATM across the street for a good 15 mins and the bouncers watching our severely drunken stumble across the road.

The night became a blur of dancing and jäger bombs, not that we needed more alcohol. 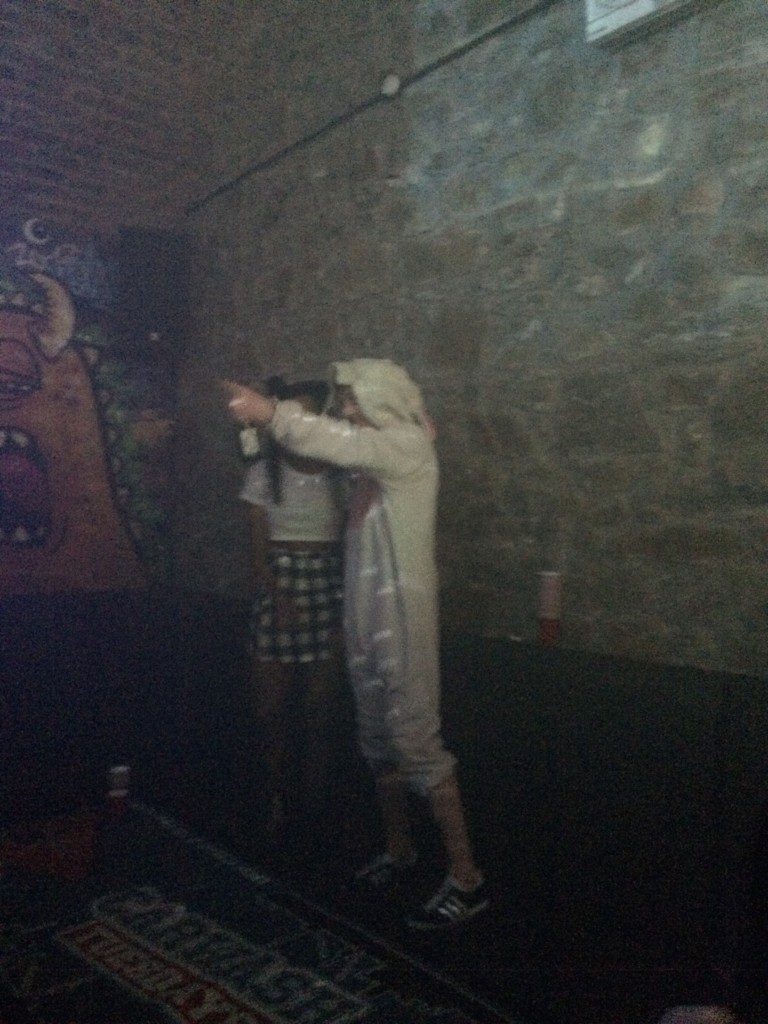 “He looks cool in his onesie, we should defs talk to him”

The red wine drinker ended up befriending and dancing with someone in an animal onesie. 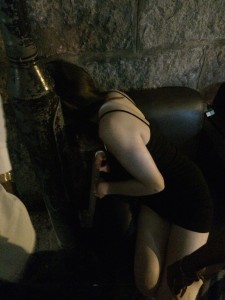 ‘I just spewed outside Underground- classy’

The gin drinker ended up throwing up in the smoking area.

The prosecco drinker disappeared with a guy shortly after we got to the club (drinking prosecco prevails).

And the vodka left me in a state where a large amount of people thought I was on pills.

Depending on what you want from your night, cheap vodka can create a lot of different drunks. 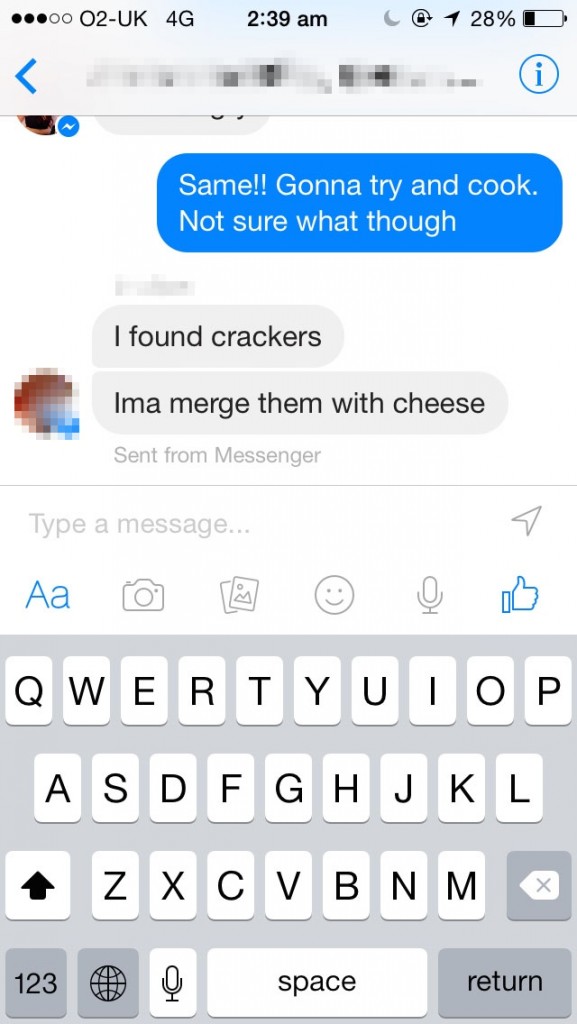 But none of us avoided the hangover and subsequent day of not moving from bed, so as interesting an experience the Lidl booze provided us, we won’t be rushing back to it in a hurry.

What Aberdeen students need to know about the new lockdown changes

Here are the changes AU is putting in place for the start of term.

‘There is a genocide going on’: Aberdeen students protest against SARS

Students stand against the suffering and brutality in Nigeria

There are 82 Covid cases at Aberdeen Uni, and “a number” are linked to The Bobbin

Prepare for a term of studying at home, the SDR only lets in 170 students!

All residents of Wavell House are being asked to self-isolate

Pubs are closing again in Aberdeen as lockdown restrictions reimposed

The measures will last for at least seven days

After 40 days, 4000km, wild animals, and inedible food all because of Covid

He was described as ‘talented’ and ‘wonderful’

What are the responses to Aberdeen university’s new ‘blended learning’ approach to teaching.

The university will be using a ‘blended learning’ approach

It will at least be ‘partially online’

Aberdeen University exams to go ahead despite no-detriment policy

The university released details of their no detriment policy via an email to students.

The move will allow preparations for online learning to be made

We had months left with our friends, but that time was snatched away

RGU cancels classes due to coronavirus

Alternative teaching arrangements are to be implemented

Aberdeen Uni suspends all face to face teaching because of coronavirus

All lectures will be moved online from 6PM

Plans for exams are still unclear

From Blackberry to Nokia: These are the stocks that Reddit wants you to buy next

Being gay isn’t a performance, it’s our lives

How do I do the TikTok silhouette challenge? A step by step guide

Why everyone is talking about GameStop stocks today, explained as simply as we can

If your mum tries to ask you what it’s about, just say stonks

‘My timeline looks good now and that’s all that matters’

If you loved The Fall, get ready for this 👀

The CCTV cameras at Rita Ora’s birthday party were ‘turned off’, according to police

Which It’s A Sin character are you? Take this quiz to find out

‘Doing 12-hour shifts for free is inhumane’: Student nurses on why they deserve to be paid

‘I was so overwhelmed, they offered me a session with a psychologist’

‘I’m healthy in every sense of the word’: Young men on living life as HIV positive

‘I get more DMs than ever now’

Quiz: How well do you really remember A Cinderella Story?

Only Hilary Duff is getting full marks

How well do you actually remember season one and two of You? Take this quiz to find out

Joe Goldberg will forever live rent free in my head

Dear influencers: Stop using ‘be kind’ as an excuse to be a dick in the pandemic

Your photoshoot is not essential work, stay at home and be kind to the NHS

Why is everyone suddenly giving themselves eye bags on TikTok to look tired?

‘My insecurity is now a trend’

QUIZ: Tell us your 2010s online habits and we’ll guess what degree you study

We know you edited your Facebook profile pictures on CamWow

Celebs Go Dating exes: Here are the ex-partners of this year’s celebrities

This is your time to SHINE