Student pres says she is ‘disappointed’

A room of white students at last night’s Annual General Meeting voted down a motion to reserve a place for a black student on the Trustee Board – but voted through a Forersterhill representative.

Those present took to social media to voice their disgust, with last year’s President for Environment and Ethics Eva Nohe slamming the outcome as “utterly racist”.

A 99% white audience is telling black students they don't deserve a rep on Trustee Board. What a joke. #ausaagm

AUSA defined a black student as someone from Asian, African or Caribbean descent. The argument against the motion was there isn’t even a female quota and more women go to university than black students.

The trustee board is the highest level of AUSA bureaucracy, currently made up of four students, the seven sabbatical officers and four external experts. Between them, they decide the bigger AUSA questions like where funding will go and what is technically allowed or not.

But during the count, Emily Beever, Student President stood up and pointed out that a room which was predominantly filled with white people were voting on an issue that affects black students.

The failed motion caused an uproar among AUSA hacks. 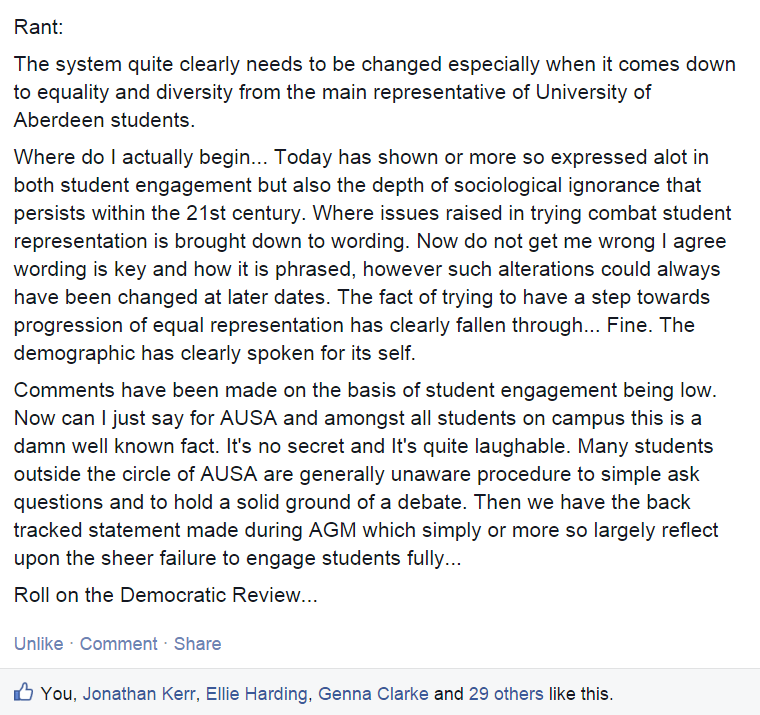 When a room of white people vote against positive discrimination for black people. #irony #ausaagm

The black student quota fell by two votes with 124 voting to establish the quota and 66 against. As the motion needed a two thirds majority to be passed 126 votes would have been needed to create it.

And amazingly, after the falling of the motion last year, the Foresterhill quota passed by 20 votes.

Beever has since said: “I’m disappointed the motion to reserve a place on our Trustee Board for a self-defining Black student fell.

“We know more diverse boards make better decisions thanks to their extended experiences. AUSA will still aim to attract a diverse range of candidates to apply for the post.”