“It’s not about money, it’s about inequality,” cry staff as Diamond and his fat cats take home more than they’re worth.

Lecturers in Aberdeen on Thursday were forced to take to the streets to combat the mere 1% pay increase as part of a national strike movement whilst our own Principal’s salary went up an enormous 25%.

Since October 2008 staff salaries have gone down 13% in realtime and although the numbers on the picket lines were small, the message was loud: for a quality education universities need to start investing in their staff. Interestingly, only 35% of the University and College Union took part in the ballot over pay, with 62% voting for strike action. If this issue is so important why were members not voting?

Adam Price of the Plant Genetics department believes: “This is the general state of people’s power in Britain, they believe their vote doesn’t matter. It’s a sad state of democracy.”

Despite the dramatic pay-cut, pay wasn’t the issue for every member of striking staff. Instead, this is a “last stand” after the UCU refused to negotiate on the enormous workloads.

“If they said we’ll give you a 1% pay increase but also a cast-iron guarantee to reduce the workload I believe the strikes would stop,” Price continued, “Staff are dedicated to their students but I worry about our mental and physical health. I did a 64 hour week last week. It’s bloody hard. Our contracts don’t specify hours so there’s no overtime – I could have worked 35-40 hours and received the same pay.” 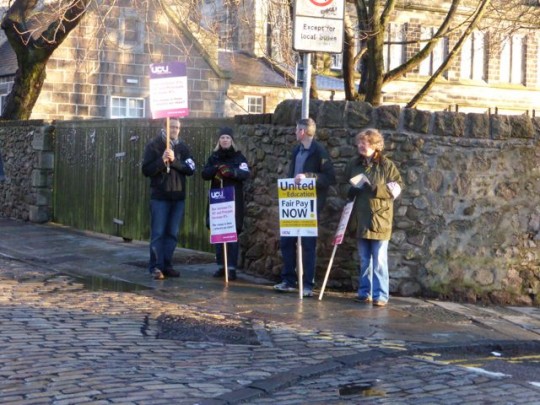 Nick Speeding in Geography commented that “academics are called lefty-wasters with long holidays – unfortunately people see four month’s holiday but they don’t understand the work that goes on.”
“On a 40 hour week the salary looks good, but the reality is you work 60 hour weeks and give four weeks free work to the university.”

Another lecturer, who preferred to remain anonymous, said that: “Your level of education is so high because of staff goodwill. If we did a normal hour week it wouldn’t be possible.”

Most staff I spoke to on the picket line said they would even take a pay-cut if the university would hire more staff: “Quibbling over 1% is indictive of everything that’s going on in the system. We need to go back to a system that realises its most valuable asset is its staff.”

However, the senior members of staff noted that this certainly isn’t the case for those starting out in their academic careers, with one lecturer worryingly stating, “If pay continues to go down I can’t continue to recruit pHD students in good conscience.” 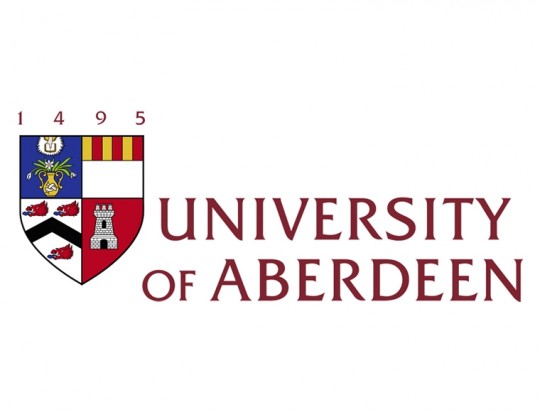 The University of Aberdeen is going to great measures to discourage the strike action. When lecturers went on strike in 2006 the Principal at the time, Duncan Rice, withheld 1/365th of their pay for the respective loss of teaching time.

Ian Diamond, the current Principal, has raised that to 1/266th, and is also withholding staff pensions on strike days. This means that if a member of staff were to die on the day they were striking – whether on the picket line or at home – their family would be entitled to nothing.

It is tactics like this that were labeled “vindictive and mean” on the picket lines on Thursday. “It’s cynical,” one lecturer added, “considering he chucks around the word ‘colleagues’.” 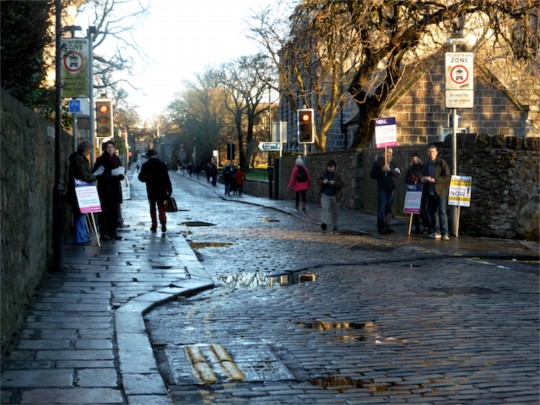 A further two 2-hour strikes were organised by the UCU last term but the University of Aberdeen, along with around ten other universities, notified their staff that it was a full-day strike as far as they were concerned, and any work that was done outside of those two hours would be considered voluntary. “The university is claiming the Unions are causing disruption when in fact they escalated the strike action. Management is portraying the Union as disruptive but they’re the ones causing lock-outs.”

But it’s not just his counter-strike actions that have incensed his work force. Ian Diamond currently earns over £335,000 a year as Principal of Aberdeen University, an average of over £50,000 more than his counterparts in other Scottish Universities.

“It’s appalling,” said Price, “it doesn’t motivate the staff he leads. University should be set in how we want society to be set, not with the people at the top getting paid masses.”

Having been told by one senior member of staff, “I’m lucky if I get to the end of the month – I should not be in this state at this stage of my career”, it is easy to sympathise with the strikers’ reaction to his “heinous” paycheck.

“We’re a bit like a bank now, we’re becoming a corporation and so we have to smell and dress like a corporation. The people at the top – these are not academics. They are managers. It’s no different from being the head of Sainsburys nowadays.”

It is this corporate attitude that is the main fear of the academic staff for their students and the state of education across the UK: “The university sees us as a commodity, we sell the product of education and they’re not concerned with those selling it. Students also see it as a product. The expectation of students is you will provide me with what I need in order to get a 2:1 to get a piece of paper to get a job. Education has nothing to do with people anymore. Staff-student relationships are failing.” 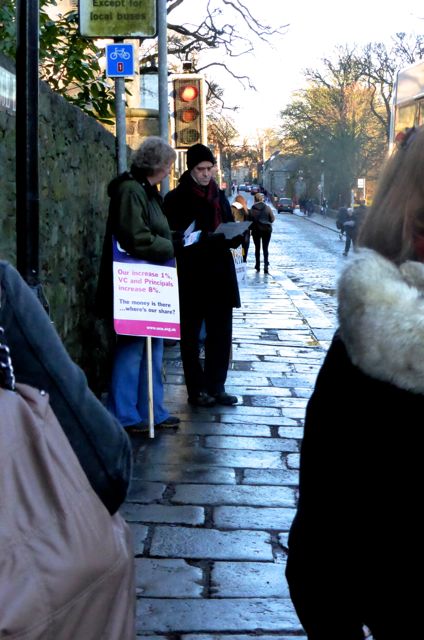 Many students have been sympathetic towards the strikes – “I think they understand we have more in common with them than management” – but a huge concern of those on the picket lines was that “students don’t realise we’re going on strike for them.”

“If I was paying for university one thing I’d want is a highly motivated and happy work force,” said one.

Considering “the effect on morale is bad” within academic departments, is the university doing enough for its student’s education? This lecturer’s revelation that emphasis is put on recruiting students based on monetary value suggests not:

“I’ve been told many times that a foreign student is ‘worth’ £11,000,” said one, with another adding, “There’s a low priority for Scottish and EU students because they don’t bring in money.” 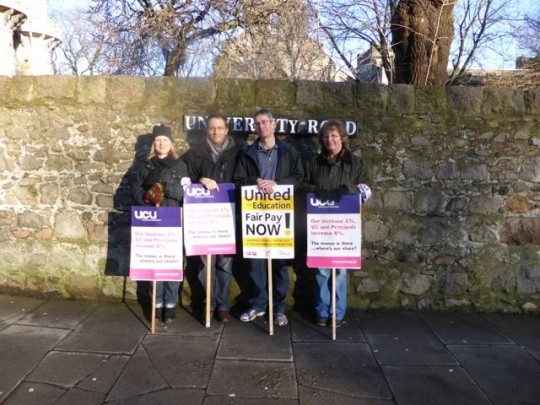 Not only is this attitude a worry in itself for local students, but the enforcing of it shocking, with one lecturer disclosing that her department are actually penalized if they fail to increase the recruitment of international students:
“The department budget looks healthier the more international students you get. If it looks unhealthy you’re punished and management can’t hire replacement staff so the individual workload increases.”

It seems that with an influx of corporate attitudes and ideals the University has stopped caring about the individual whether they be student or staff.

“I wouldn’t be surprised if Aberdeen turned into a diploma mill.” 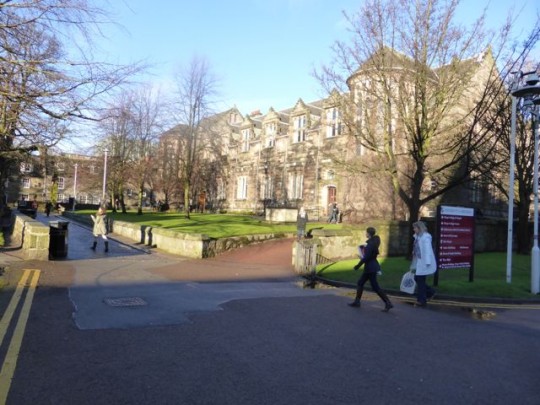 What is the future of education in Aberdeen?

What can the students do?

Get involved:
“If there are strikes students need to complain about it. If admin can say disruption is minimal things will be allowed to continue. Support the strike by complaining to the university about it as a lack of education.”

“Talk to your lecturers about it, interrogate them, and think about it.”

Packing up his billboard one lecturer said “The Union doesn’t want us to but after the strike I’m going to a café to talk to some of my students about The Odyssey. It’s not a tutorial, it’s not compulsory, it’s just because I really like mythology.” 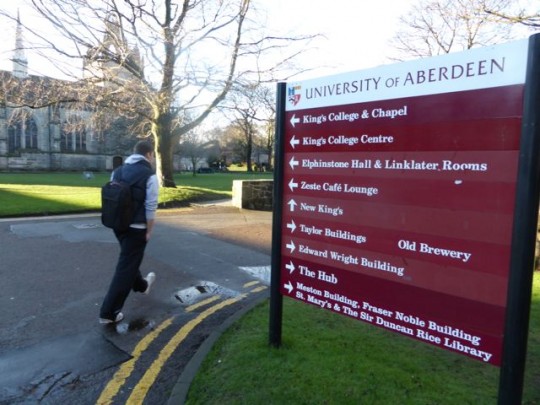 “Do I care about a promotion? Yes,” another lecturer laughed, “but that’s what you do. You work your way up the ladder. That’s corporation.”

“However, I also bumped into my third year class today and happened to have the text they’re studying in my bag,” he winked, “it was a lucky coincidence.”

It seems that, unlike Diamond and his management team, for those that went on strike the value of education is priceless.

Ian Diamond and his office chose not to comment.