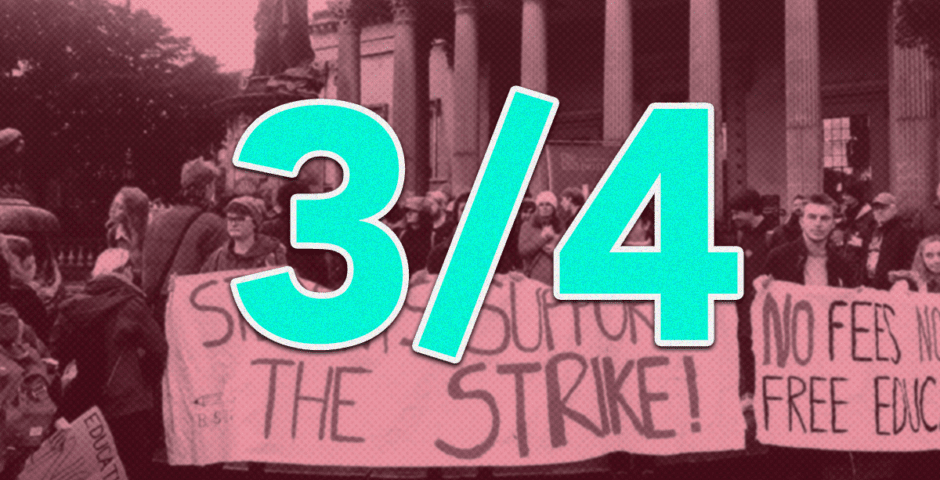 ‘I really do sympathise with lecturers, but it gets to a point where they just take the piss’

Nearly three in four students no longer support striking lecturers, following the announcement that staff at 41 UK universities will boycott marking work and assessments this term.

A Tab Instagram poll received over 600 responses and revealed that before lecturers voted for the marking boycott, they had the support of 63 per cent of students.

However, following the recent announcement, opinion amongst students seems to have shifted massively, with 72 per cent of respondents saying they no longer support striking lecturers.

So far this year there have been 13 days of university staff strikes, with lecturers campaigning for better pay, fairer pensions and against equality pay gaps.

On top of the upcoming marking boycott, 10 more days of strike action are planned for this academic term.

Sam, one of the students who responded to The Tab’s survey, said: “I really do sympathise with lecturers, but it gets to a point where they just take the piss.”

Ellen added: “I do support them and their cause, but I wonder if their strike is impacting the wrong people. I think if they want change, the institution should feel it, not the students. The idea is disruption, but it’s not disrupting the right areas.”

Commenting on the survey, universities minister Michelle Donelan told The Tab: “Striking academics have pushed students’ patience to the limit and the latest plans to boycott marking and assessment are a kick in the teeth to all those who have studied so hard.

“After the disruption students faced through the pandemic it is profoundly unjust for lecturers to punish them over an industrial dispute that is not of their making – and it’s no surprise that sympathy with their cause amongst students looks to have fallen away.

University and College Union (UCU) represents the interests of university staff and is behind the strikes as well as the marking boycott. “Our members choose to work in universities because they love working with and supporting students, and no staff member is taking this action lightly,” a spokesperson told The Tab. “But low pay, insecure contracts and exhausting workloads have pushed staff to breaking point.

“The marking boycott is a last resort for staff who feel like they have no other choice. The fault lies solely with university bosses who are choosing to let students suffer by refusing to deal with the issues that blight higher education. We urge vice-chancellors to use the sector’s huge financial reserves to resolve the dispute and avoid any further disruption.”

The Tab asked the National Union of Students (NUS) if it supports the upcoming marking boycott. NUS Vice President for Higher Education Hillary Gyebi-Ababio said: “By continuing to ignore valid staff concerns, university bosses are saying that they are willing to compromise student learning conditions and staff working conditions all to keep to their bottom line.

“The same education system that forces students into food banks exploits staff on insecure contracts, who have seen their pensions cut and real-terms wages dramatically slashed in recent years. University bosses must come back to the table with and stop inflicting damage on higher education. The only way to move forward from this is to meet the demands of striking staff.”