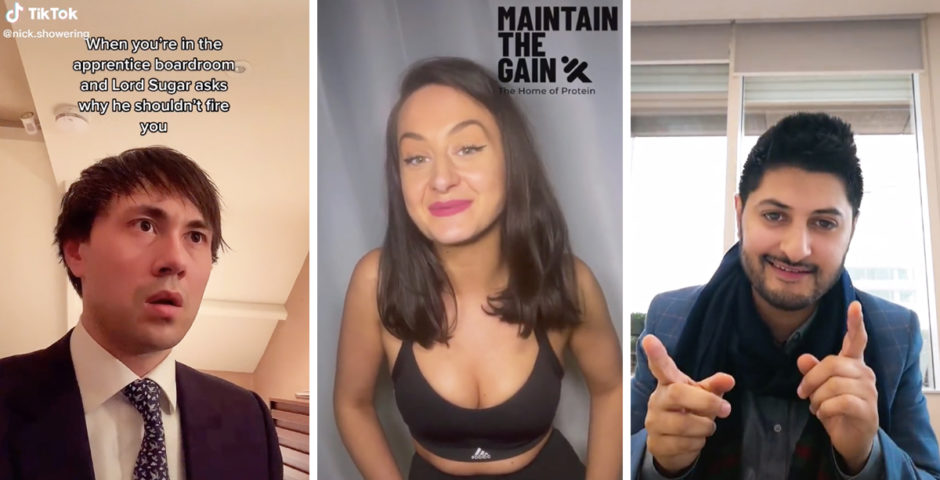 Help, The Apprentice 2022 candidates are on TikTok and they are god awful

Content warning: Someone has let The Apprentice 2022 candidates get TikToks and it’s not pretty. Lord Sugar’s latest bunch of hopefuls have been let loose on there, and their videos are nothing short of toe-curling.

They’re doing dance trends, lip-syncing and desperately trying to be funny. And to be honest, a lot of them are really, really funny – but I’m not sure if it’s for the reasons they intended. Here are all the 2022 candidates on The Apprentice who have TikTok accounts. Be aware, your eyes may be bleeding after watching some of these.

Nick Showering has gone the most viral out of all The Apprentice 2022 candidates, with some of his TikToks getting millions of views. One where he rinses the boys, so himself included, for always picking green and brown in their branding colours has had over 1.3million views.

@nick.showering If something doesnt work once, try it again #theapprentice #theapprenticeuk ♬ tarawarolin wants you to know this isnt my sound – Dad on Tik Tok

He posted another of him shaking with a glass of water, captioned: “When you’re in The Apprentice boardroom and Lord Sugar asks why he shouldn’t fire you”.

From the moment Navid Sole was presented to us in the cast list, we could tell he is an icon. He has quite a few TikToks, where his bio says he is introducing us to his “world of Pharmacy, Travel, Reality TV, Rap and Fashion”.

Harry may have been fired in week one, but everyone still deserves to see this video of him dancing whilst spinning around in an office chair. Enjoy.

Are we surprised that Kathryn Louise Burn, aka the CEO of Boujie Cruises, is the candidate whose account is purely dances? We shouldn’t be.

Aaron too has loads of videos, and over 7k followers. More recently he’s been posting videos rinsing the boys on The Apprentice this year, but he’s a big fan of a cringe lip-sync.

I’d also really like to know why he posted what should have been a nice relaxed video about mental health and talking walks, but added the tense and on-edge Apprentice music? This is uncomfortable?

@aaronwillisofficial Walking is definitely the best medicine. An hour walking the dog in the woods gets me focused on the day. #theapprentice #bbc #walk #fyp #apprentice ♬ The Apprentice (Main Title Theme) – Baltic House Orchestra

Francesca only has four videos on TikTok at the moment, and a hand-full of followers. She has shared that, aged 16, she won the school award of most likely to be Alan Sugar’s replacement. Look at her now!!

Brittany doesn’t have a personal TikTok account, but she has one for her company, Maintain The Gain. She shares videos introducing her ~interesting~ business idea: A protein drink…that’s also alcoholic.

I have nothing but respect for Amy, she’s trying to share some good advice on her TikTok. The beauty businesswoman only has three videos on her account, one of which explaining dermaplaning. The choice of doing it to that chopping dance trend is a little bit cringe, though.

@amyanzel You need to make Dermaplaning a part of your beauty regiment!…and use the #HollywoodBrowzer to do so:) #dermaplaning #beautytools #beauty #beautytips ♬ original sound – Amy Anzel

We’ll skip over her GCSE Media style video roundup of 2021.

Candidates Akeem Bundu-Kamara and Alex Short also have profiles, but are yet to post any videos.

The Apprentice in on Thursday nights at 9pm on BBC1. Episodes will also be available on iPlayer.

• So, what happened to Claude Littner and why isn’t he on The Apprentice this year?