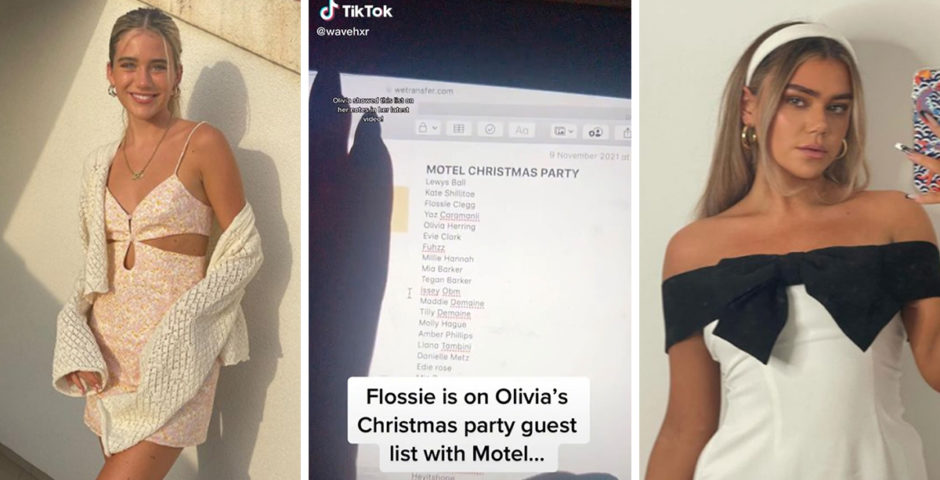 People are claiming the Flossie and Olivia fall out is fake. Here’s all the evidence we have

I can’t keep up with all the drama

Thanks to Olivia Neill and Flossie Clegg, we have had a lot of drama to unpack and dive into. There have been all sorts of rumours flying about but the main one has been saying the girls are supposedly no longer friends. Most of us believed it, especially since both Flossie and Olivia vaguely hinted at it in one way or another. Olivia replied to a comment on her shitposting TikTok account saying she would’ve loved to go to Flossie’s Slazenger launch party. Whilst Flossie uploaded a YouTube video titled “A week in my new and improved life” – it was all quite salty and savage. But now we’re reading claims saying that the entire Flossie and Olivia fall out was fake.

You’re probably thinking what evidence do we have for their fall out being fake?? Well, a couple of things have come out since the start of all the rumours. One of them being a trailer for Flossie and Olivia’s brand new YouTube original series!! Honestly, it’s mad how invested we all are in this. Let’s get into the hardcore evidence and address these rumours saying the Olivia Neill and Flossie Clegg fall out has been fake all along:

Okay so in case you didn’t know, Olivia Neill has gained a pretty big following across her social media because of her style. Which makes sense considering she has a few edits with the Motel Rocks clothing brand. Anyway, in her most recent vlog we see her making a Christmas party guest list for over one hundred people in the notes section on her laptop. She quickly flips the camera and shows the list of names, one of them (the third name on the list, to be exact) is Flossie Clegg. You might be thinking this was a clip filmed ages ago but no, you can see on her notes she wrote it on 9 November in the evening and all the drama first kicked off early November. Very, very suspicious.

Obviously people on TikTok have screen recorded this footage and zoomed into Flossie’s name and have been sharing their thoughts. One person posted this video of Olivia’s guest list and captioned it: “Why would she invite her if they’re not friends??”

Both of them are releasing a collaboration with YouTube Originals

Sure if they have fallen out then this could just be really shit timing but come on. A full blown YouTube Originals series being announced just a week after falling out? Their fans are saying this all seems preeetty suspicious. One person on Twitter said: “My mental state is depending on me believing that Olivia and Flossie have fake fallen out as a publicity stunt for this new YouTube series.” And honestly? Same.

The trailer for the series dropped on Olivia’s YouTube channel only but Flossie did share it to her Instagram story. The series is called “Hometown Showdown” and the description for the trailer on Olivia’s channel says: “Whose hometown is the best? I’m showing off Belfast to my bestie Flossie Clegg who in turn is showing off her birthplace, the Cotswolds.”

The top comments under the video are all pretty much saying the same thing. The comment with the most likes says: “Okay but if this whole falling out was just a PR stunt for this that’s hella smart lmao.”

The comment just under that one with two thousand likes says all of us believing they weren’t friends was “such good marketing.” However other people on the video are sharing other opinions. For example one person said: “Guys, whether they are or aren’t friends, it’s between them. If they want to address it they will. In spite of any falling outs, this was pre-filmed and there would have been an agreement that this would get posted in the future.”

• Are you more like Olivia Neill or Flossie Clegg? Take this quiz to find out

The Tab has approached both Flossie Clegg and Olivia Neill for comment.