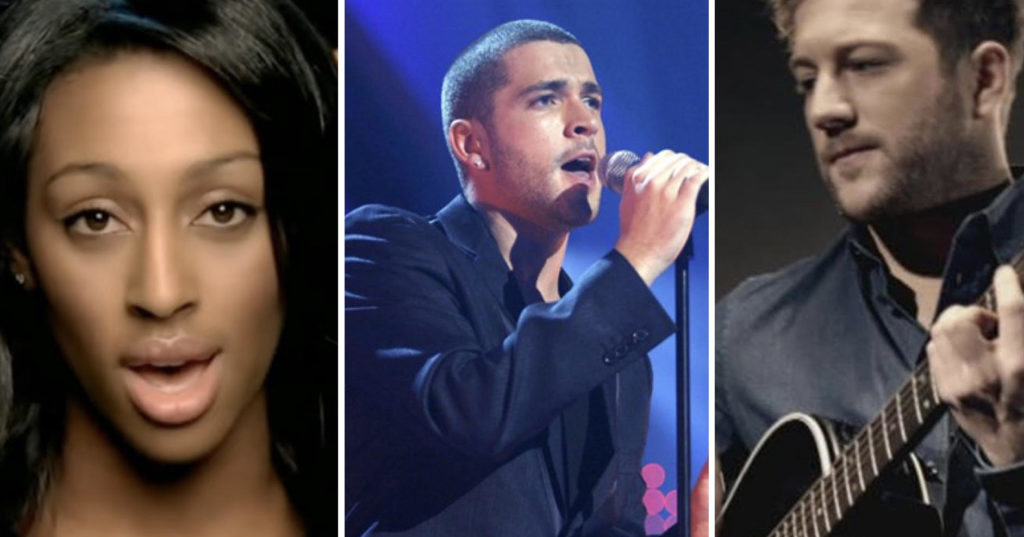 All the crap X Factor winners singles, ranked bleakly from terrible to tolerable

It’s peculiar that in 15 years, with 15 artists and infinite resources at its disposal, The X Factor never once managed to truly hit it out of the park with the singles it allowed the winning act to release as their debut. Fighting for that coveted Christmas number one spot, the show consistently favoured middling covers of songs that often barely matched the artistic style of whoever was singing it. Little Mix covering Damien Rice? Sure! James Arthur covering *checks notes*… Shontelle? If you like! I suppose Cowell and his cronies operated on an “if it ain’t broke, don’t fix it” plan – every winner’s single reached number one consecutively for 11 years until Louisa. That isn’t bad going. It’s actually miraculous going when you consider how fucking awful the songs were. Here are all 15 dismal X Factor winners singles, ranked from unlistenable to serviceable.

15. Steve Brookstein – Against All Odds

Honestly, it’s a miracle The X Factor wasn’t canned straight after this shite got released as the FIRST EVER winners’ single. It was all up from here, but not by much. How a vocal this boring and tedious won the show no one will ever know, but I think perhaps the fact that Steve Brookstein’s cover of Against All Odds is unavailable on streaming services tells you everything you ever need to know about it. Get the Mariah version on instead.

14. Leon Jackson – When You Believe

Ban boring X Factor men from covering Mariah Carey now! Please! For the love of god, it will never end well! I don’t know if Leon Jackson is even on pitch for the studio recording? Do you want to sing a take of the song without your voice cracking for me please, doll? Followed in Steve’s footsteps and When You Believe is no longer on Spotify. Perhaps for the best.

Ben Haenow beating Fleur East to the win in The X Factor final of 2014 is one of the biggest national disgraces to ever befall this country. That aside, both song and Ben’s cover are deeply and irrevocably shit.

The Climb by Miley Cyrus had barely been out a year before The X Factor bigwigs decided that you know what the world needed? A mousey whisper of a cover from liccle Joe McElderry. Funnily, it turns out we really bloody didn’t need that at all! Weird! He does his best with it does our Joe, but when you have the vocal talents of the colour beige there’s not really much anyone can do to make it worthwhile.

11. Dalton Harris – The Power Of Love

The by de-facto final ever winner of The X Factor was Dalton Harris, and I think honestly about a grand total of 23 people tuned in for season 15. It tells you a lot about the dire straits of The X Factor’s fall from the top that not only were Christmas songs being unrelentingly pushed as winners songs, we also had to endure James Arthur being dragged back in as a featured artist in a last ditch attempt to boost the winner’s sales. There was no music video released either. Bleak. The Power of Love is a great song and Dalton is a good singer, but 11th place is all it’s getting when it comes to X Factor winners singles ranked.

10. Matt Terry – When Christmas Comes Around

Gets bonus points for being an original song because, quite frankly, ALL X Factor winners singles should have been original songs and those that were get brownie points from me when ranked. You’re putting these winners into the industry where they need to craft their own identity and you’ve given 12 out of 15 of them covers? Make it make sense! Sadly for Matt Terry, he’s got no identity to craft. The best he got was this middling, Ed Sheeran penned Christmas ballad that made me feel about as festive as a lump of coal.

Sam Bailey is the owner of a cracking set of pipes. She’s also the owner of one of the most boring X Factor winners’ singles ever. Skyscraper by Sam is almost identical to Skyscraper by Demi Lovato, but with absolutely none of the emotional, raw impact of their original. Just a winners single doing everything you’d expect it to do. Yawn.

Louisa Johnson should have burst into the music industry and been the biggest pop star in the country. She is outrageously talented, a vocalist at an astronomical level and if she auditioned years earlier she’d have probably been one of The X Factor’s most successful exports. But Louisa couldn’t do that, as she’d have been quite literally a child. Why they made this pop superstar in the making sing a church-y cover of Forever Young is beyond me. But does she sing the HELL out of it? You betcha!

7. Matt Cardle – When We Collide

Why is Matt Cardle’s cover of Many of Horror by Biffy Clyro suddenly called When We Collide? Because it’s The X Factor and we’re selling a dream, baby! We need a key change and some romcom strings! No horror here please, just Matt Cardle living the synthetic dream! I think it says a lot about X Factor winners’ singles that a cover this truly, sickeningly dull manages to get into the top half of the ranking. As a 14 year old when this came out, I liked it. I guess that is potentially worth some merit for our Matt.

I would like to state that I’m trying to rank this purely on merit of the songs and vocal performance, with little to no reflection of what I think of the artist. Because James Arthur is somebody I do not support in any of his endeavours after he infamously rapped the lyric “you fucking queer” in 2013. It says a lot about how much people value homophobic slurs made like that that James Arthur has still been permitted to have a hugely successful career. That aside, Shontelle’s Impossible is an incredible song, one that’s hard to get wrong. He sings a good song decently, but just stream Shontelle instead.

I don’t think anything has ever been quite as off brand as Little Mix being made to cover Damien Rice for their winners’ single, but here we are. Cannonball is the worst song Little Mix have ever recorded, but it’s the fifth best ranked X Factor winners’ single. So make of that what you will about the standard we’re working with here. It got to fifth place purely for the fact all four of them sing perfectly on it. The drum beat in this production is one of the worst things in music history.

An original song! Praise the Lord, it’s an original song! Shayne Ward does the most 00s song ever for his winners’ single, and you know what? Fair play, Shayne. You’re sexy as fuck and your song is a 2005 period piece that we reflect on nostalgically. There are worse positions to be in. And you got to be a main character on Corrie.

This is actually what it’s all about. Rak-Su had star quality, did their own original songs and released a winners’ single that was reflective of them as artists and of their career! GOOD FOR THEM! And Wyclef Jean and Naughty Boy hopping along for the ride is pretty good going considering this was the penultimate season of the show ever and not a soul was even watching. Actually, dare I say it, a bit of a banger?

Bloody gorgeous vocal performance from Alexandra Burke here on Hallelujah. Hallelujah is a gorgeous song in all its interpretations, but she nails it. It became the fastest selling single by a female artist in the UK of all time, made Burke the first woman to ever have a single that shifted a million copies and is the best-selling winners single in X Factor history. Good for you, Alexandra Burke!

I think a testament as to why Leona Lewis’ cover of A Moment Like This stands tall ranked over all other X Factor winners’ singles is because we hadn’t really become burnt out by the cliche of the formula yet. Winning season three and remaining the greatest singer to ever win the show, Leona sells a song written with the intention of being a winners song perfectly. Kelly Clarkson released it as her American Idol winners song, and Leona followed suit in the UK with hers. It doesn’t tread on the toes of fans of the original songs that get a Cowell makeover for the winner – it just soars as its own little song about personal triumph. Leona Lewis reigns supreme.