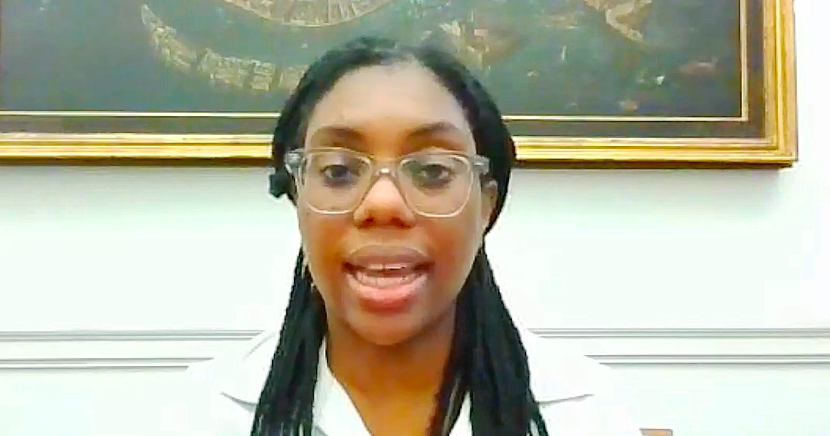 In the clip, obtained by VICE, Tory MP and equalities minister Kemi Badenoch reportedly mocks gay rights, as well as making other anti-LGBTQ comments in 2018.

She said: “It’s no longer about minority rights in terms of race any more or nationality, it’s now, you know like, it’s not even about sexuality now,” VICE reports.

“It’s now like the whole transgender movement, where, OK well we’ve got gay marriage, and civil partnerships, so what are transsexuals looking for?”

“Transsexual” is an outdated word that is considered highly offensive by many trans people.

VICE reports she says: “Even when, you know, so, people hear about, you know like the whole bathroom thing, it’s actually more of an American thing but they have a similar problem, that, right so now it’s not just about being free to marry who you want, you now want to have men using women’s bathrooms.”

She also reportedly appears to mock gay marriage in the recordings.

The comments were made in 2018, according to VICE. Badenoch became equalities minister in February 2020.

Deputy leader of the Labour Party Angela Rayner called the comments “disgusting”, saying: “Everyone should be able to be themselves and be celebrated, supported and loved for who they are. The Equalities Minister should not be in her post if she does not believe that.”

A UK government spokesperson told VICE: “The Minister for Equalities is working hard to deliver for LGBT people, whether that is modernising the process of applying for a gender recognition certificate, driving forward LGBT rights in the workplace or banning conversion therapy.

“This 2018 comment has been taken out of context, with the Minister making a clear point about striking the balance for equality and fairness when there are multiple and often competing demands between different groups. It should not be used to misrepresent her views.”

• ‘Being queer isn’t a disease’: Young queer people on the rise of anti-LGBTQ+ attacks