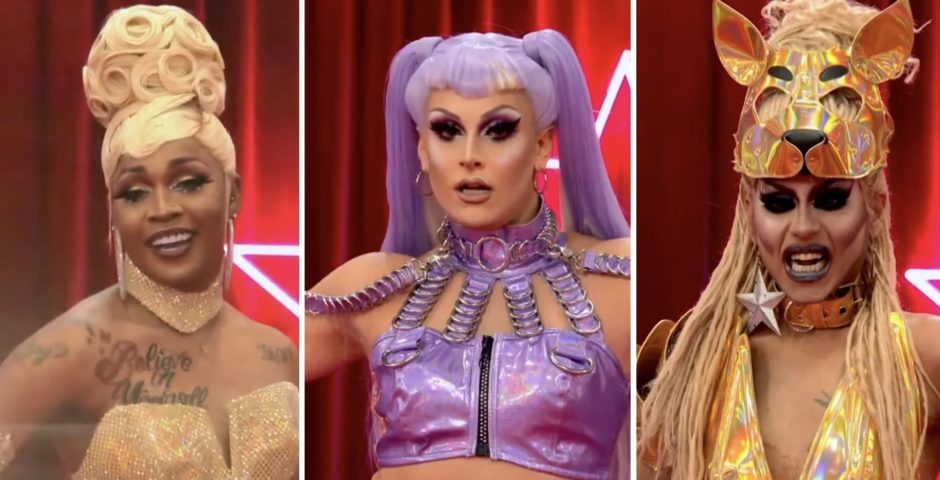 Right, which All Stars 6 queen is most likely to win then?

Well. They confirmed it. The All Stars 6 cast rumours were true.

A few hours after we posted the leaked promo pics that were circulating online yesterday, the official Drag Race YouTube channel debuted Meet The Queens and we got to see the Tina-Burner-inspired orange and yellow promotional pics in all their fiery glory.

The cast this year is… interesting. And fan reaction has definitely been mixed. It isn’t a cast chock full of fan favourites, but it is a cast of chaos. And that usually makes for great telly. It is the first time that the majority of the cast of All Stars placed lower than seventh in their original run on the show.

In all previous seasons of All Stars, there’s usually been a few queens in the mix that unquestionably deserve to be amongst the royalty of Drag Race winners. In All Stars 2, Alaska, Katya, Alyssa and Detox all really proved a huge threat for the crown. Trixie, Ben and Shangela fought tooth and claw to be in the Hall Of Fame on AS3. Manila, Latrice and Trinity were big AS4 frontrunners and it was a two horse race between Shea and Juju for the AS5 crown.

But that’s not really apparent with All Stars 6. With this cast, it feels like anything could go down. We’re surely in for a hefty dosage of tactics, competitiveness and iconic Drag Race moments. But how likely is each queen to getting the crown?

Here’s our power ranking of the All Stars 6 cast:

Serena Cha Cha being cast on All Stars 6 is one of the most iconic things that’s ever happened in Drag Race history, but not exactly for the right reasons. She’s the lowest placing queen to ever compete again, with her season 5 tenure consisting of a bottom two placement and then getting eliminated the week after. She’s most well known for her obnoxious attitude and for the iconic Untucked annihilation she received at the hands of literally every other queen in the cast.

But, as she says  in her Meet The Queens, in season 5 she was young, and inexperienced. A lot of time has passed since that season, and who knows what she’ll bring to AS6! But if her track record is anything to go by, it ain’t looking great.

I’ve already got a headache thinking about Silky’s upcoming All Stars run. Gonna be a long slog if she repeats the success she got in season 11, where the judges frequently celebrated Silky when fans weren’t responding in the same way. She often seemed to get a free pass for her subpar runways due to Ru being fond of her – that awful cockroach runway deserved an on the spot elimination.

But she’s back, and chances are she will do at LEAST better than Serena. Silky won Snatch Game after all.

The world wants her, and the feeling is mutual! 😉 @ScarletEnvyNYC sashays into #AllStars6 – premieres THURSDAY JUNE 24 on @ParamountPlus! 🎀 pic.twitter.com/yoEtS0BdlR

Look, I love Scarlet Envy. I really do.

Very talented and underestimated queen. But the fact of the matter is, in season 11 she came TENTH. It was unfair then, and it remains unfair now.

With All Stars rules likely to be in full effect, it wouldn’t be out of the question for all the queens to underestimate Scarlet once again and get her gone early.

We ARE gagging for @RaJahOHara! 😍

I want Ra’Jah O’Hara to bring chaos and mayhem. I need it.

She was singlehandedly the only iconic thing about season 11. I laugh four times a week thinking about her saying “I’m not gagging. I mean I’m gagging from the SMELL.”

The jury’s out on if Ra’Jah will fair well on All Stars 6. She didn’t exactly crush her season, but her attitude seems different this time and her promo look is STUNNING so we hope and we pray she brings it to the runway.

May we call her Jiggly? 😇 @jiggly_official is ready to get this party all-started! 🔥 #AllStars6 premieres THURSDAY JUNE 24 on @ParamountPlus! 🧡 pic.twitter.com/xHRqstoOSM

Out of all the queens cast in All Stars 6, it’s Jiggly Caliente who has really defined what it means to have a GLOW UP.

Look at her! Are you seeing this? It’s excellence. She isn’t playing around!

Jiggly had some disastrous moments on season 4, and if she’s learned how to sew and make outfits she might place alright. If she hasn’t, it could be game over.

Like a phoenix from the ashes, it's @eurekaohara! 💓 #AllStars6 premieres THURSDAY JUNE 24 on @ParamountPlus! ⭐️ pic.twitter.com/OAYnlUnR62

If I could put Eureka dead last I would. But we all know FULL WELL the Drag Race production will be ushering her through for a while and she won’t be an early out in All Stars 6.

Eureka and Silky being on a season together is a migraine waiting to happen. But she tends to get good critiques despite problematic behaviours and a consistently tepid-at-best reaction from fans. So there we are.

Sonique is so FIERCE. On season 2, she never really got her moment. She hadn’t come out as trans yet and didn’t really come across like she knew who she was – you could see that she was holding back. And now she’s here – bursting with confidence and trans excellence.

She’s such a great performer and it will fair her well on All Stars. Excited to see what she’ll deliver this time round.

Pandora really was Drag Race’s first full on comedy queen. Many thought she was going all the way in season 2.

Pandora is quite unique in that she placed top 5 in her first run and then got eliminated instantly in All Stars 1. She really was done dirty by that cursed twist that the queens would be competing in pairs. Mimi Imfurst was her downfall.

She’s so talented and very competitive. A lethal combination, and she’ll likely be a force to be reckoned with.

Where is the bawdy? Miss A’Keria is THE BAWDY!

Hugely talented and quite underrated in the grand scheme of things, A’Keria could really dominate amongst this cast with her pageant polish and performance prowess. She’s a queen who knows exactly who she is and seems to have only elevated her drag since season 11. Definitely stands a good chance.

Alright, I’ll say it. Trinity K. Bonet is the most underrated queen in Drag Race history.

The runways were all immaculate, but the LIP SYNCS… are all legendary.

Trinity admits herself in the All Stars 6 Meet The Queens that she wasn’t really prepared for her run on season 6. She wasn’t braced for the performance challenges, and they threw her off her game. But this is All Stars, baby. And she’s back.

We NEED her lip syncs to be on the euphoric level of her Whatta Man and her I’m Every Woman. They teach them on the syllabus at Lip Sync School.

C'mon Glamour Toad! 🐸💅 @TheGingerMinj is back, back, back again!💓#AllStars6 premieres THURSDAY JUNE 24 on @ParamountPlus! ⭐️ pic.twitter.com/uYNxFj9FMg

Should Ginger Minj be in this cast? Is it fair?

After Art Simone’s Down Under return, it seems Drag Race no longer operates in the business of fairness. Ginger’s a talented queen and will go far in All Stars 6 – but her return feels weird. She already got to the finals of season 7 and then had her shot at All Stars 2.

If Ru casts Ginger, does that mean anyone who didn’t win in All Stars can come back again for another go? How many attempts are people allowed? Who knows. She’s here anyway, and she’ll do well.

Jan is just so talented. Period.

Infamously done dirty on season 12 and so competitive it bordered on manic, Jan is BACK. And she’ll be a finalist. She could definitely win the whole thing. Can sing, can dance, can act, serves looks. And seems rejuvenated and ready to compete without looking like she’s about to pop a blood vessel every three minutes.

Crown it. End of!

So talented, funny and fierce. Amazing performer, amazing drag queen and the only reason Yara’s not gone all the way in her other two attempts at a crown is because of who she was up against.

In this cast, the win is pretty much in the bag for Puerto Rico’s finest. Echa pa’lante!

• Quiz: Which Drag Race Down Under queen are you?