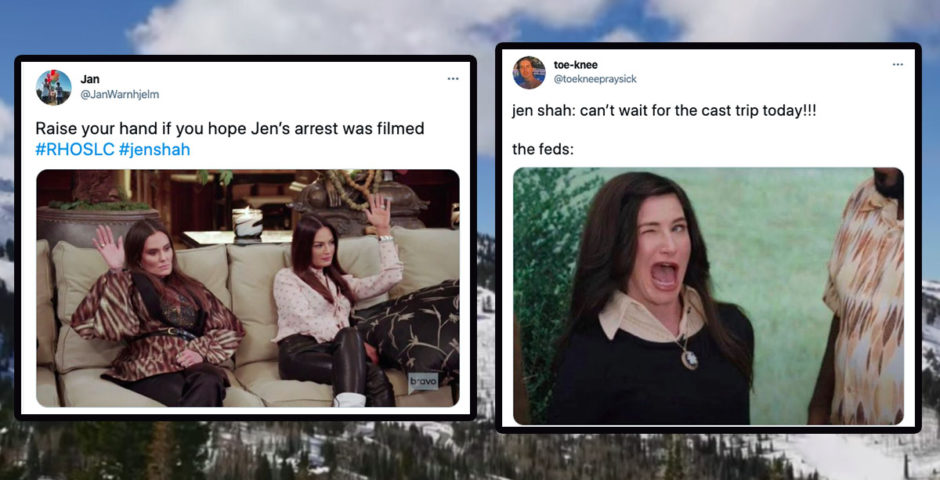 I need a six-part Netflix series on this asap

It’s been a big day for the Real Housewives universe after it was announced Real Housewives of Salt Lake City’s Jen Shah was arrested and naturally Twitter responded with a lot of memes about the news.

Yesterday Jen Shah was arrested and charged with conspiracy to commit fraud and money laundering, alongside her assistant Stuart Smith, who fans will have seen on Real Housewives.

Jen and Stuart have been accused of running a US wide scheme since 2012 with over 55s being the majority of the victims of the scheme. The two were charged yesterday and face up to 30 years in prison for “conspiracy to commit wire fraud in connection with telemarketing”.

Twitter was full of reactions and memes about the news, with many people hoping the moment will have been caught on camera as Jen was believed to be filming Real Housewives of Salt Lake City when the arrest took place.

These are the 23 funniest Jen Shah arrest memes:

1. They really took partner in crime to another level

Jen Shah AND her assistant Stuart were arrested??!? BOTH OF THEM?!? #RHOSLC pic.twitter.com/epVf9FMBE5

2. For legal reasons this is a joke

If Mary M. Cosby tells Jen Shah she "smells like prison? in Season 2 of #RHOSLC I will never recover.

jen shah getting arrested on a tuesday afternoon? #RHOSLC pic.twitter.com/dpYOt3J82A

If cameras were rolling when Jen Shah was arrested… nothing in Housewives history will ever compare. #RHOSLC

6. I need to see this on screen

Raise your hand if you hope Jen’s arrest was filmed #RHOSLC #jenshah pic.twitter.com/osfLgTMeOn

7. Just waiting for her to drop this one

8. Netflix please get started on this

I want a 6-part Netflix docuseries on Jen Shah’s crimes and I want it now. #rhoslc

Jen Shah getting arrested for fraud on a Tuesday afternoon is something I was not expecting but I’m here for the mess #RHOSLC pic.twitter.com/3aQO5Rgkp7

Running to social media to tell all the Queens the hot tea about Jen Shah #RHOSLC pic.twitter.com/K7bZ6FsgFq

11. I love when we all have something to bond over

Producers of #RHOSLC when the Jen Shah news broke pic.twitter.com/XHCJ0RxCHY

Jen Shah is Jen Shah
coming back for goes to prison
season two during filming pic.twitter.com/fUOEbgnWmg

14. How is everyone else not talking about Jen Shah?

#RHOSLC
Footage of me reading up on all the Jen Shah charges: pic.twitter.com/mAB20WmHSq

17. At least she looked great

It’s the fact that she was in full glam when she got arrested for me lmao #RHOSLC #jenshah pic.twitter.com/AMPxgUlDUe

19. I’ve talked to my friends about nothing else

Literally me and my Bravo besties sending each other the Jen Shah tea #RHOSLC pic.twitter.com/tblqj6kFUk

21. Look I’m just gonna need some time off to process this

Jen Shah really got out of bed this morning, got her a fresh set of box braids and thought she was headed on a cute getaway with the girls to film #RHOSLC…

23. That’s what she thought

•Ranked: Who is the richest of all the Real Housewives of Salt Lake City?

•Ranked: Who is the richest of all the Real Housewives of Beverly Hills?

•Quiz: Which iconic housewife are you from The Real Housewives of Beverly Hills?