I have held my tongue for a long time, but nearly a month on and my feelings are still as strong as when this ridiculous show debuted. Except people are STILL talking about it. There is no respite for Bridgerton naysayers and I want to open up a safe space for us to finally breathe the words…Bridgerton sucks.

And yes, I watched the whole thing. With my mum. Which as you can imagine was particularly uncomfortable at times. But eight eps in and I was wincing at more than just the sex scenes. Everything that everyone else was dying for was making my skin crawl. Thank U Next but make it Regency. Make it post-racial (with a small line about race being all we need to explain this apparently) but entirely hinged on women’s oppression. Steal the main plot device of Gossip Girl and hope no one notices because it’s shrouded in a mahoosive budget and lots of lace and weird hairstyles. It just didn’t do it for me.

Bridgerton was cringey, unoriginal and agonising. Hear me out. This is everything I could not STAND about Bridgerton. 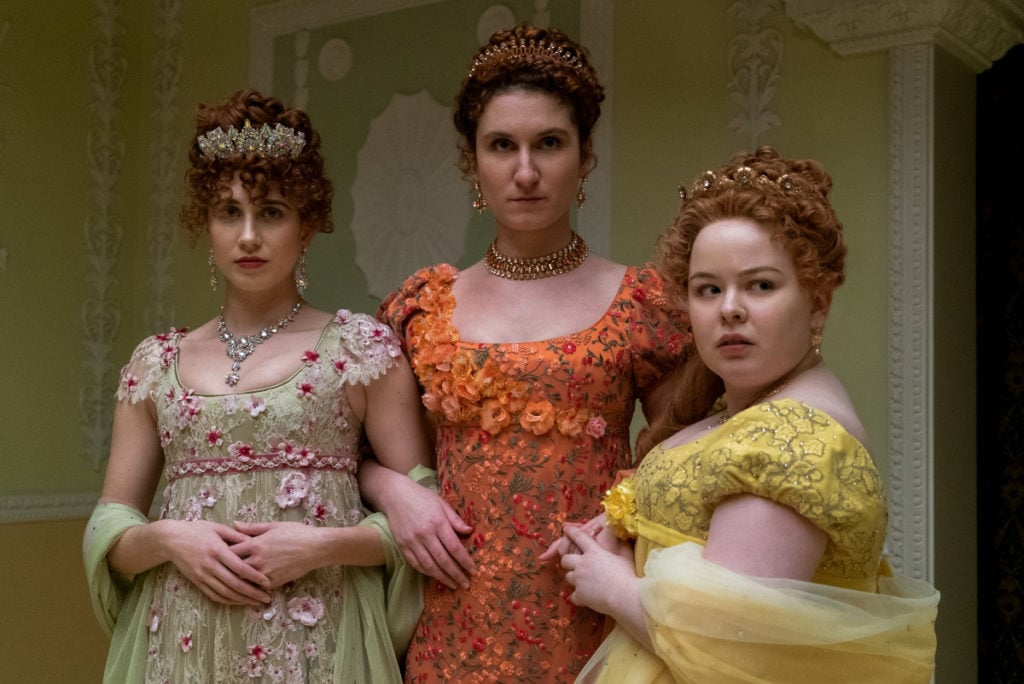 Right so clearly the producers here were like “We want Pride and Prejudice but modern. But not TOO modern because it still has to be believeable” and so they made it SEXY. “What if it was like Elizabeth and Mr Darcy…but they bang?” was clearly going through their heads. Hate to break it to you but this is not original and people have been making period dramas steamy for a very long time.

So they axed the sense and sensibility but kept loads of weird shit which would have been better left in the props bin, like the hairstyles. Speaking of. 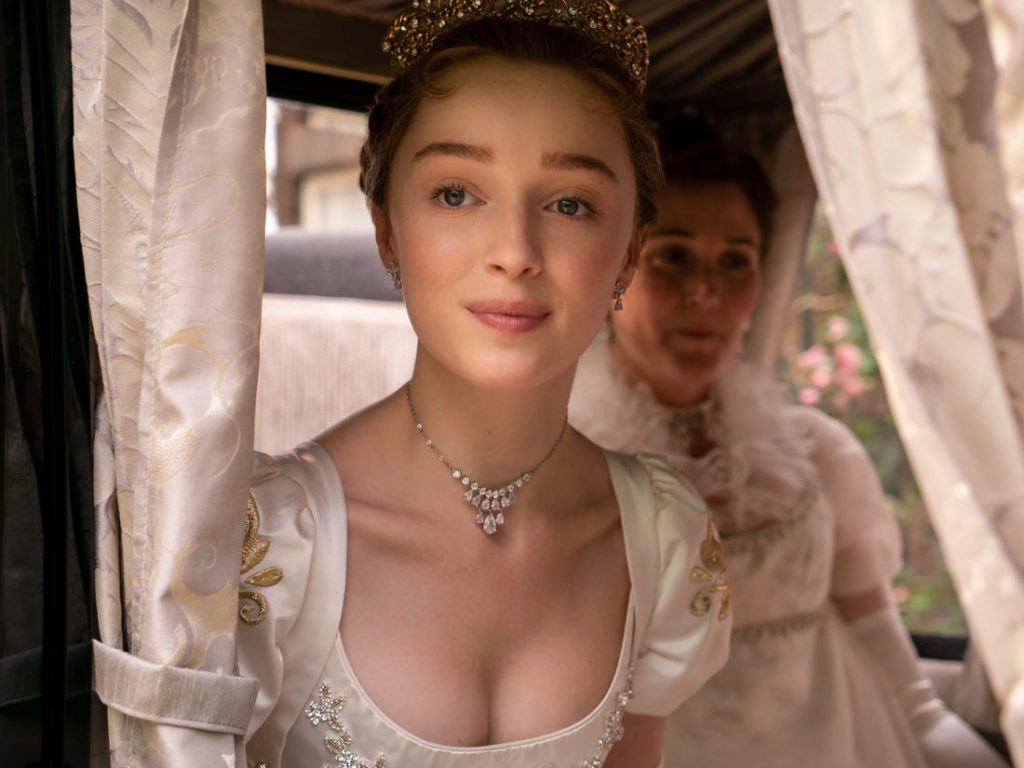 WHAT IS THAT. WHAT IS THAT FRINGE. WHY. I just do not understand how you could take someone so peng and do this disservice to them. Phoebe Dynevor must have read the hair and make up department plans for her and felt like she was going into an America’s Next Top Model makeover episode except she’s one of the unlucky girls who has to shave her head. Honestly maybe bald would have been better than these little pincer mf’s on her forehead.

I also get personally upset when I have to see Nicola Coughlan on screen with that ugly wig on and the empire waist too. I know the Regency era was an unforgiving one in terms of certain styles but if the producers were willing to bend the realism enough to include violin covers of Taylor Swift then they should have given my gal some wardrobe JUSTICE. Which conveniently brings me to: 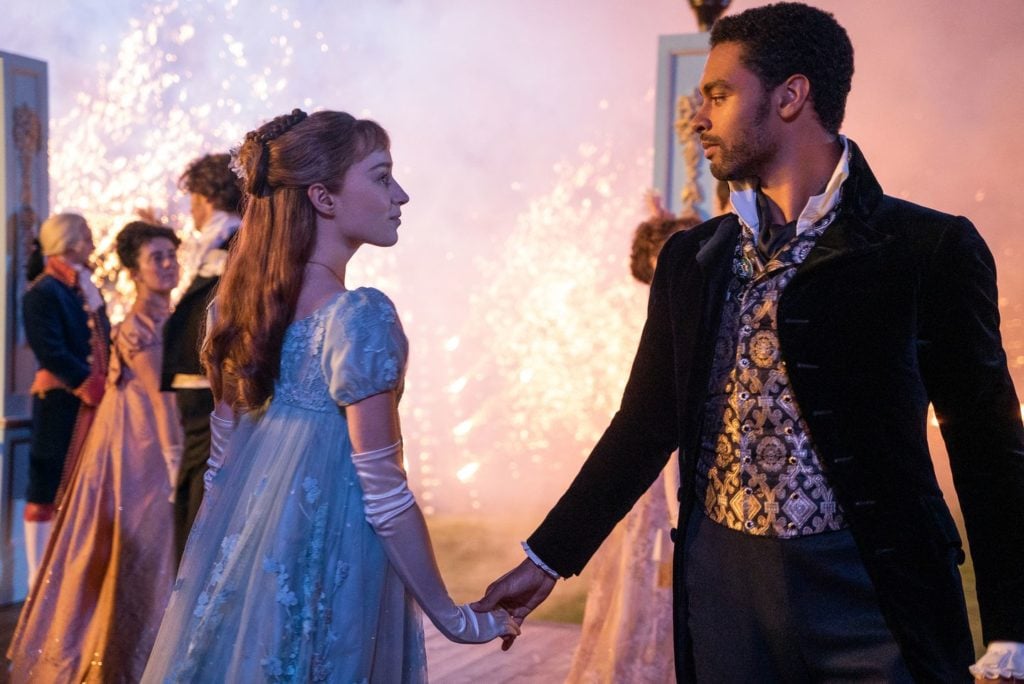 This was a very half baked attempt to do “Regency but make it modern” (the whole show is, oop) and it just jarred. Not only was it incredibly weird hearing bangers in violin form but it was just the clear secondary option to using the ACTUAL SONGS.

There is a reason Marie Antionette (2006) was so good and it was not Kirsten Dunst’s acting. Sorry Kirsten. But pairing actual modern music with old timey TV shows and films is a bold move with big payoffs and they just…didn’t do it. Did they forget? Did they not get the rights to the songs? These are the only excuses I will be able to make peace with, because if it was a conscious decision I will never forgive Netflix for it.

Uh, why are the title credits so shit?

Million-pound budget but clearly they were down to a tenner or something by the time they had to make the credits because it’s just an extremely long shot of a tree growing. It’s also essentially a tapered down version of Games Of Thrones and The Crown credits, which are extremely-skippable up-close shots of something growing, twisting and turning (namely, crowns). I am bored of these and I would have hoped the title credits might at least be a break from the actual show. They were not. Weak theme tune. Weak idea. Weak tree. I want to gnaw at that stupid CGI tree like a beaver and yell TIMBER like Kesha as it falls. Fuck that tree.

The even weaker attempt to address race 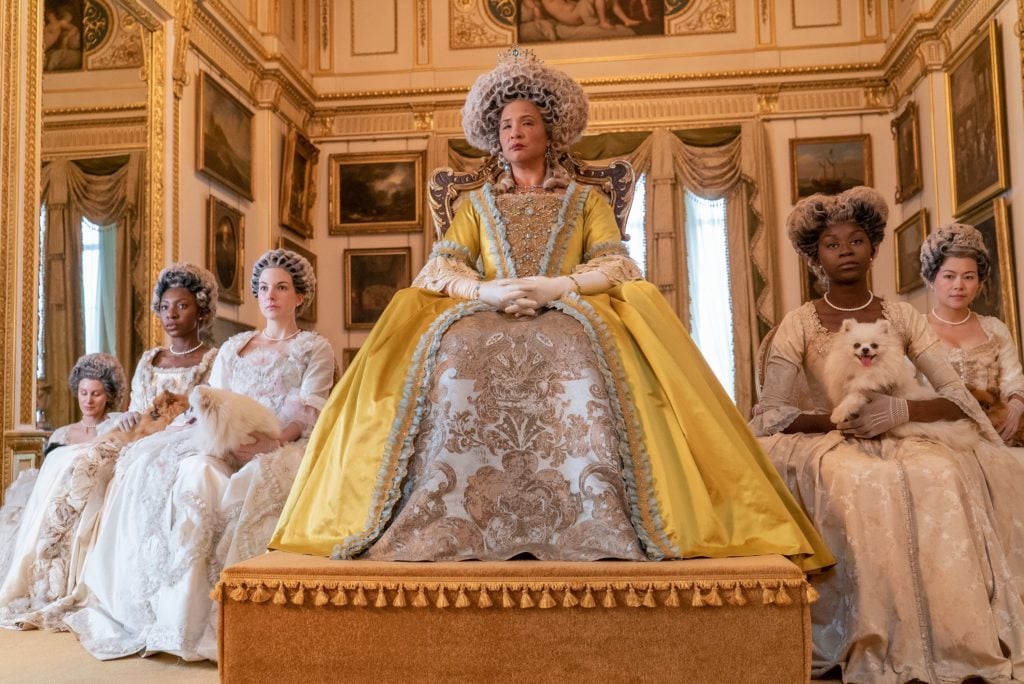 At the beginning you believe Bridgerton to be set in a post-racial world where it isn’t even discussed or noticed, kinda like the “colour-blind” 2019 adaptation of David Copperfield. There’s arguments for this – mainly that it’s kinda fucked up if we keep making films that entirely exclude non-white people from the main roles, because it is – and against it, because it doesn’t do justice to the actual struggles faced by people of colour during these time periods. Bridgerton attempts to straddle these two criticisms, trying to put its foot down on both. It does neither.

It actually becomes weaker in its stance when it introduces one line about how the Queen (who is black) marrying the King (who is white) brought equality between the races. In real life, we know this is not true (cough, Harry and Meghan, cough) and also it completely neglects…every other race? It almost would have been better to just not say it, or to dive in head first and tackle it properly. We all know Shonda Rhimes is capable of this from her work on Grey’s Anatomy, How To Get Away With Murder and Scandal. She is not afraid to tear deep into topics of race and unpick them, but with Bridgerton it felt incredibly half hearted. However, it is not my place to unpick it either, so I’m open to other people who thought this was a fair choice. It just didn’t sit right with me. Especially when you consider how…

Race is no longer an issue but sexism is the BIGGEST plot device? 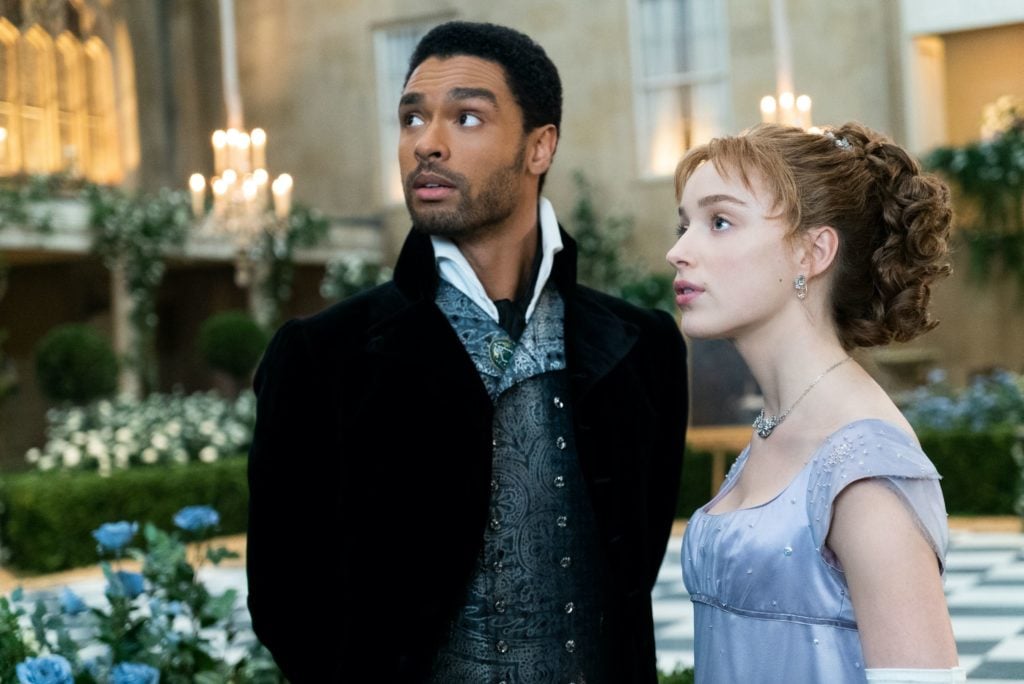 This aspect made Bridgerton an incredibly uncomfortable watch, more so than any sex scene did. The series starts with our all familiar reminder that the main point of this period drama will be women getting married to men, because that is all women are good for. Throughout, the main threat and antagonist of the show is not a character but the prospect of a woman literally being “ruined” if she does anything “improper”, aka has a little kiss or fails to marry the right man etc.

Jane Austen novels and their various adaptations get away with this being used as a plot device because this was literally reality at the time she was writing. For Bridgerton, it is not. It’s also a messed up conscious choice because racism was decided to be solved (nice) but they wanted to keep the rampant sexism because it made for… good TV? (Not nice!) Unsure how I feel about that. Personally I think they should have committed to either representing both struggles, accurately, or just set it in a post-racism and post-sexism Regency world. How much more fun would that have been? Hold my wig Penelope I’m off for a shag.

It is just Gossip Girl with none of the Jason Derulo

Look I see the comparisons to Gossip Girl being used to compliment Bridgerton but for me it is nothing more than an insult. Gossip Girl was a work of art and Bridgerton stole its Unique Selling Point and then spat Taylor Swift violin covers at it. Gossip Girl was elite, Bridgerton uses phrases like “The Ton” and tries to convince us that’s okay. And the Gossip Girl “Mmmm watcha say” Thanksgiving scene? Bridgerton could never. 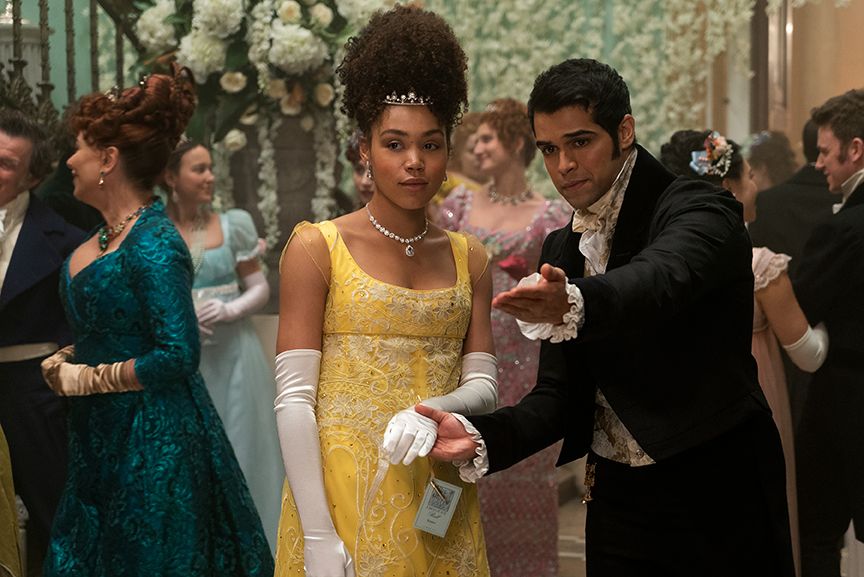 Also, the main characters are like a glass of tepid water

Yeah Regé-Jean Page is very fit but first off his character’s name is Simon – who allowed that? – and secondly he has ZERO personality. Come to think of it, neither does Daphne. It’s just a lot of whining and pull out game issues. I get that they’re really hot but at this point I need a little more than that to keep me entertained. Eloise spin off in season two, please and thanks.

• Ranked: Who in Bridgerton lives in the most expensive home?

• Here are 29 more Bridgerton memes, all worthy of your hand in marriage

Revealed: The biggest Married at First Sight Australia villain, as chosen by you

Over 6,000 of you voted to choose the biggest marital maniac

You found our last Gilmore Girls trivia quiz too easy, so this one is twice as hard

She posted a video the day before her sister’s death

Cyrell makes up at least a third of these

Ranked: These are the most expensive shows and films Netflix has ever made

The top cost over half a BILLION

Curtis will charge you £63.75 for a birthday shout-out

It doesn’t end at Bitcoin

Wow I wonder if Jess and Dan went the distance?

Is it too late to transfer?

Cases have nearly doubled since 2019

Another drama series to binge on? Oh, go on then

Ranked: The percentage of students who actually drop out of each Russell Group uni