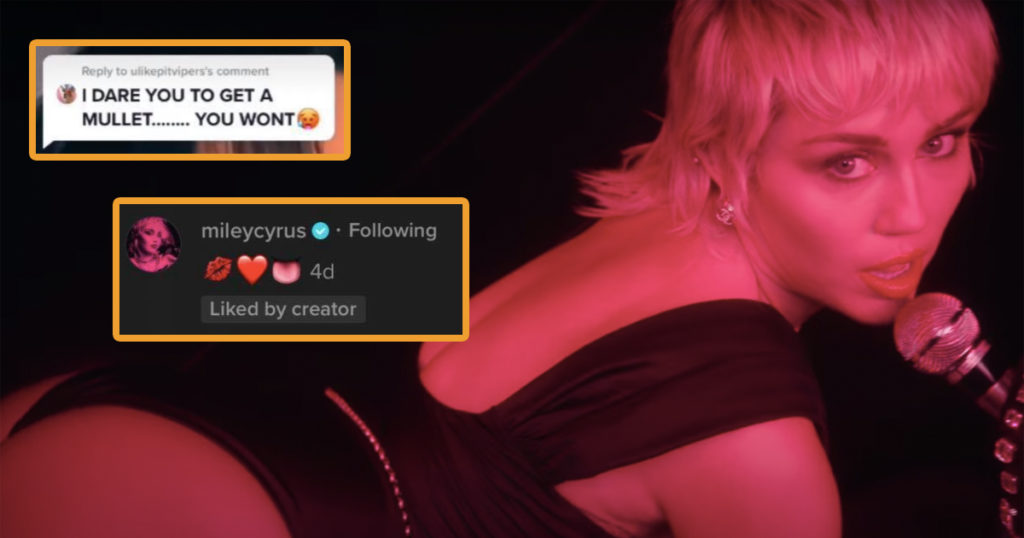 The chaos she has created is next to none

Growing up in the Miley Cyrus era (or should I say, eras, because there have been many) is something many of us will never forget. Whether it’s the ooooO-ooo transition music of Hannah Montana, her VMA performance, grinding against Robin Thicke living rent-free in your mind, or her whirlwind of a romance with the second fittest Hemsworth, Miley Cyrus is someone we all grew up with and she just keeps getting better.

Her latest album “Plastic Hearts” was released on November 27, and TikTok has been going crazy for it. So much so, that they are asking Miley Cyrus to comment on their videos and offering to do some pretty wild things in repayment. Whether it’s shaving your head, getting married, or recreating a scene from Twilight, Miley Cyrus will not hold back.

But would you expect anything less from the icon herself? No, exactly. Here are all the wildest things Miley Cyrus has commented on her fan’s TikTok videos, and proof that people have gone through with it.

‘ONLY if @mileycyrus comments since she’s my QUEEN’

On this fan’s TikTok one of her followers dared her to get a mullet, which you know is pretty standard I suppose. And obviously, she obliged.

‘If Miley Cyrus comments I’ll pierce my nipple, nose, and dye my hair half black.’

Of course, Miley responded, commenting: “I NEED TO SEE”. There is no doubt that he pulled it all off so all we can say is thank you Miley Cyrus.

‘If Miley Cyrus comments on one of my Tik Toks, can I get a tattoo?’

Another video included a daughter asking her mum if Miley Cyrus comments on her TikTok video if she could get a tattoo. Her mum replied: “Um, sure”, and just like that Miley Cyrus was summoned.

It’s unknown if this TikTokker has since acquired the tattoo, but we can only hope and wait to find out. Miley is watching.

‘If Miley Cyrus comments, we will dress up as Alice and Jasper and do the baseball scene.’

A slightly less chaotic video included a couple who planned to recreate a scene from Twilight if Miley commented and with a simple tongue emoji, they produced simply one of the best things I have ever seen on TikTok.

Not everyone went through with all the things Miley Cyrus asked of them or are still working on them but their requests are still equally as wild and there is no doubt in my mind they wouldn’t listen to the iconic woman that made Will Smith make THAT face at her VMA performance.

So here are all the mad ones that didn’t (as far as we know) follow through:

Miley commented: “Life’s what you make it. So make it rock.” So now the Tik Tok user is avidly searching for a tattoo artist to produce a work of art and I applaud her for it.

‘It would be pretty cool if Miley Cyrus commented on this. I’d let my class have a party… in the USA’

This is the math teacher we all wished we had in secondary school, just casually making TikToks in order to be “down with the kids”. Miley replied: “Put your hands up! Play MY song!”

Instead of suggesting maybe a slightly lowkey colour like black or blonde, Miley commented “PINK!!!!!” and we are begging this girl follows through with it.

I think we can all agree that Miley Cyrus is indeed a chaotic individual and you know what I wouldn’t have it any other way. Despite some uncultured individuals who thought “Why’d You Only Call Me When You’re High?” was her song, when recreating her performance on TikTok everybody has and continues to have the right idea about being deeply obsessed with Miley Cyrus.

• Ok, so why is coconut oil all over TikTok right now?

• Who is the number 7 guy everyone is simping over on TikTok?