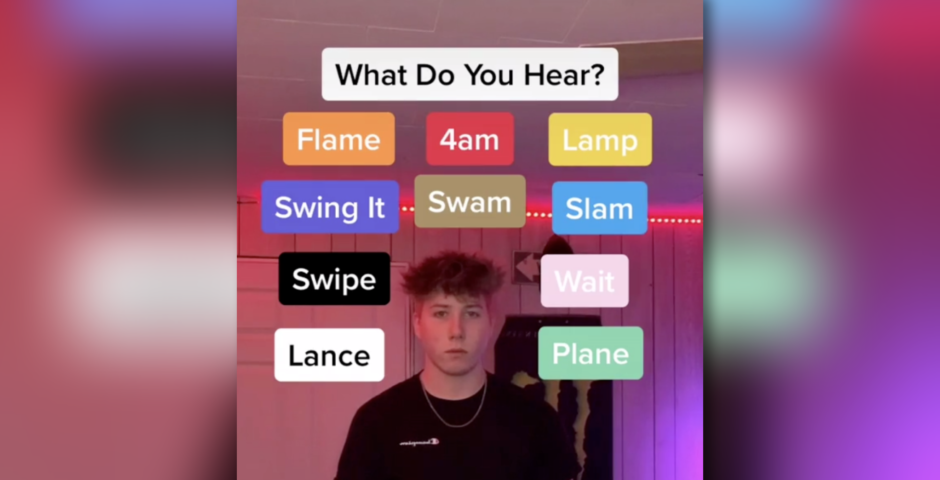 I can’t unhear ‘swing it’

Every so often there comes a problem on the internet that seems almost impossible to solve. Firstly it was the very viral dress that had everyone guessing over whether it was blue or gold for what seemed like years. Then it was the turn of the Yanny/Laurel and Brainstorm/Green Needle debates. However, the latest “Flame” TikTok audio looks set to do the exact same, apart from the fact that it’s even worse – because there are another nine words that the audio could possibly be.

What is the Flame TikTok audio?

It’s a pretty simple concept for those that are familiar with it. There’s a repeated word that, let’s be realistic, sounds too muffled to be that easily understood to begin with. Regardless, with a load of other suggestions of words you could potentially hear, your brain does the maths and you hear whatever word you look at.

Okay, doesn’t sound as simple in writing, so just watch this:

Which words did you hear? For me, “swing it” was a tricky one but once you get the American accent it’s easy.

How does the Flame TikTok audio work?

Well, it’s best to look back to Yanny and Laurel, where the frequency of the audio is to blame. The Verge wrote that it depends on which frequency your brain taps into: “The acoustic information that makes us hear Yanny is higher frequency than the acoustic information that makes us hear Laurel. Some of the variation may be due to the audio system playing the sound, Reicke says. But some of it is also the mechanics of your ears, and what you’re expecting to hear.”

So there you have it, you’re likely to hear more of the words from “flame” to “plane” if you have better hearing of different frequencies, as well as based upon what audio you expect. Cool, huh.

Where does the Flame TikTok audio come from?

Whilst the “Green Needle” audio was rather oddly from a clip of a Ben 10 toy review on YouTube (the actual sound coming out if it is meant to be “Brainstorm), there’s no obvious information where the Flame TikTok audio came from.