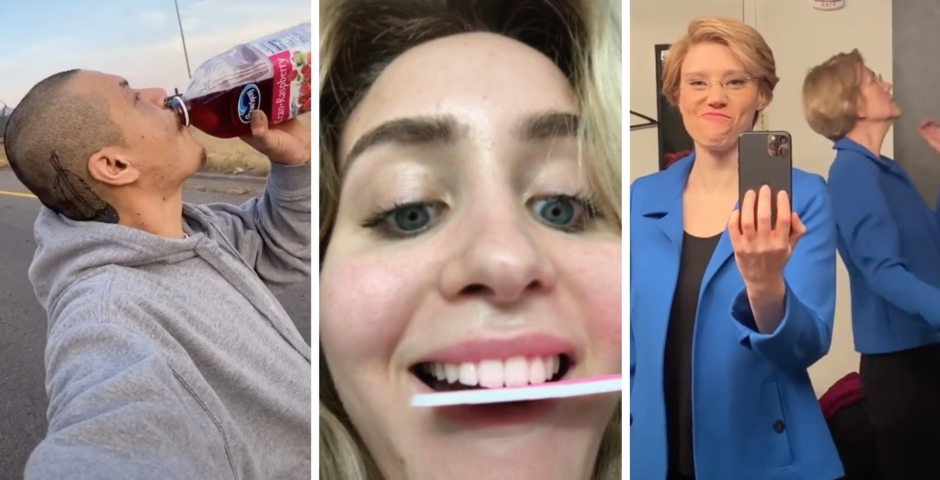 From filing teeth to posh private schoolers: Ranking the worst TikTok trends of 2020

I hate it here

There must just be something in the air on TikTok this year, for as many amazing trends we’ve been treated with throughout 2020, we’ve equally been harshly punished with TikTok trends and “challenges” that range anywhere from slightly cringeworthy to outright dangerous – like, why don’t you get a normal hobby instead of filing your teeth down or scrubbing them with peroxide? Buy an Xbox rather than dipping your balls in soy sauce! And let’s not even get onto “I just flicked the switch.” 🤢

There have been some absolute shockers so far and the year isn’t even over yet, but which has been the worst of the bunch? Well, we’ve compiled a list of the most loathsome TikTok trends of 2020 all for your enjoyment.

15. Walking in on your partner naked

Do any other girls think the same…. 😳

This trend plays on the part of TikTok that everyone tries to ignore – that there is rampant sexualisation around every corner to become viral – and the bad acting in most of these “getting naked in front of your partner” videos just adds insult to injury. In fact, of all the examples of this trend it was Sophie Habboo (beau of Jaimie Laing) that pulled off the most convincing performance, although she does literally act as a career.

This is such an inconceivably stupid trend for one reason – not because they’re climbing buildings and could get hurt. No, not even because I dislike the song.

It’s just because it’s the most meaningless trend since planking. People literally run on top of a building/mountain/insert tall thing and do a stupid Fortnite-esque dance, and it is always guaranteed to BLOW UP every time they do.

I’m going to say it – when I wrote my article about this trend, not one other person had done so. There were tweets from 2017 suggesting it would work, and an old study that said balls had tastebuds, but no hype. Essentially, I fully back myself starting this trend before TikTok took it and ran. You’re welcome.

And that’s why it must go on this list. It clearly doesn’t work, people like this shmuck try and make sensationalist content out of it by lying and everyone with more than half a brain cell can do nothing but groan.

A nice little first lockdown memory for everyone to share but a short-lived one that ultimately ended up being completely pointless. Has anyone made a Dalgona coffee since lockdown? I don’t think so.

11. Filing teeth down and/or putting peroxide on them

This was a BIG trend this year, which saw many people either level their teeth with a nail file or put highly toxic chemicals on them to get that Hollywood smile. After a swift debunking from every TikTok based dentist (of which a surprising amount came out of the woodwork) people finally came to their senses, but really?

This is obviously a bad idea by anyone’s standards so it’s actually amazing that people actually did this without a second thought.

10. Boys dressing up as their girlfriends

HUR DUR MAN DRESSED UP AS WOMAN. That’s it. The end.

9. The Wipe it Down challenge

What’s more dislikeable? Will Smith being on TikTok or the Wipe it Down challenge on the whole? Because I’m finding the choice far too difficult to make right now.

Whichever you pick, this challenge is another annoying one because of the sheer amount of celebrities that got involved. It’s like as soon as there’s something that they catch a whiff of ruining for others, they leap at it.

I actually really like this audio, it’s just the twerps attached to it that are the main problem. They go MENTAL for this one, and you’ll see by a brief browse through the other examples using this audio that every single toff in the country has got in on the action to flex their Devon holiday homes and Range Rovaaaas.

The brief is simple – mime along to this tune whilst looking like as much of a posh wanker as possible.

7. This is my voice after one day

Argh, this is a trend that started waaay before 2020, but unfortunately it’s also one that’s stuck and keeps getting reused. The most offensive thing about this is that they are literally all the same and there’s no creativity applied to distinguish them.

They all follow the same blueprint of standing in the mirror and increasing your accent, behaviour and clothing in different tiers until you become the stereotype of a certain type of person.

Oh look, another TikTok trend that encourages the posh idiots of this country to come crawling out of the woodwork. This time it’s the private schoolers’ turn, who use the Empire State of Mind private school remix to flaunt their wealth and generally act like complete Burberry-clad arses.

Luckily, a school recently had to apologise after flaunting a bit too hard, and the audio doesn’t seem to be available on TikTok anymore.

Okay I’m sorry, but it’s another case of a trend spreading like wildfire because it takes ZERO effort to replicate and is guaranteed to get you at least a few likes, which makes it AWFUL.

Apparently the reason Bella is moving her head like that is because she’s pretending to see a bee (hence M to the B), in which case this clearly deserves its place on this board for people just taking any old sound and using it for clout.

This lacklustre effort by Charli D’Amelio really ought to say everything that needs to be said about this trend. Nonsensical, boring, STUPID.

Okay now we’re at the top three, and we’re starting with “Don’t leave, take me with you.”

Does anyone else just see red when watching the above clip? Seriously, it can’t just be me that finds this so beyond the realm of anything considered funny. You wouldn’t laugh at the jokes individually so why does them frantically chasing each other around a garden with that stupid catchphrase make it any better?

I know what you’re thinking – oh Harry, you’re only hating on this guy because he’s only just been in the news and he’s an easy target. WRONG.

I hate this because it started a trend of people mimicking his actions. This video was great, but it’s since spawned a load of people… standing on a skateboard and drinking a drink. The man himself is somewhat loathsome for getting so much free stuff, but from what it sounds her clearly deserved it.

So carry on selling beanies for $30 and hoodies for $50 on your website my guy. It even says in the about section: “Stay tuned for what’s next for the man the world fell in love with during a time when we all needed to smile.” No thanks.

1. I just flicked the switch

Aaaaaand at numero uno we have the monstrosity that is the “I just flicked the switch” trend. You can guarantee that if celebrities and politicians start get involved with a trend it’s going to be an absolute shitshow, and the above video is probably the best example of this.

There really is nothing more hatable than seeing a load of celebrities take on a social media challenge and project such forced positivity into the world. Just look at Kate McKinnon’s face – the falsety of that stupid “I’m holding in how HILARIOUS I find this situation” face is fucking infuriating. I never want to see this again.

• Vote: Which TikTok audio is the most iconic of all time?