‘It’s meant to be the home of pizza and pasta and I really can’t see how!’

In a post on her Instagram story – which tabloids were quick to point out was taken on her third summer holiday of the year – the Love Island star gave the cuisine a Ramsey-esque blasting.

“I absolutely loved Venice but one thing I will say about Italy in general…the food is actually shocking? So controversial I know but I’ve been a lot of times now to different parts and I’ve tried a lot of different restaurants and I’m always so disappointed,” Molly-Mae wrote. 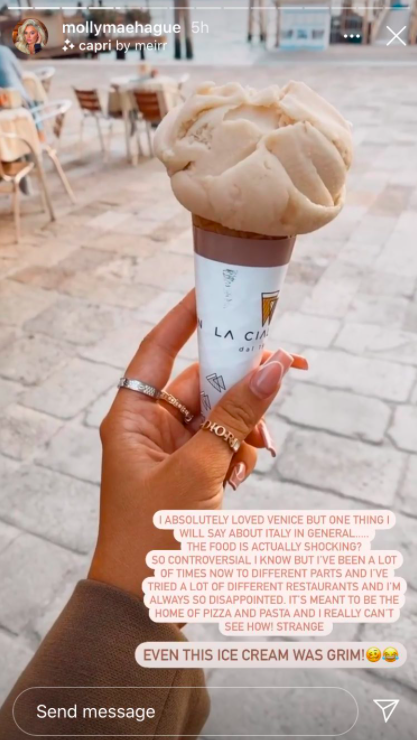 “It’s meant to be the home of pizza and pasta and I really can’t see how! Strange”.

Holding a nice-looking gelato cone, she added: “Even this ice cream was grim”.

Forced into a hasty retreat, the Love Island star then recorded a video for her Instagram story, saying: “Sorry if I offended anyone, it’s just my experience. Everyone’s like, ‘You only tried the touristy restaurants’, like, no, I actually tried all different kinds like rural restaurants.

“I got recommended to go to these traditional Italian restaurants that are meant to serve the best pizza and pasta, and again I just wasn’t impressed and it’s not me being ungrateful. I had the best time, it’s just my experience of the food.”

However, she added that her tirade had struck a chord, and that plenty of people in her DMs agreed.

After returning from Italy, Molly-Mae posted snaps of her having a big roast and then drinking a Tango Ice Blast in the cinema.

It’s not the first time Molly-Mae has attracted culinary controversy. A chicken dinner she cooked Tommy last year left people aghast at how bland it was – plain chicken, potatoes, and some brocolli. Willing to take an internet bullet for the love of his life, Tommy quickly said it was a “fighter’s meal” and that “I don’t like seasoning or any of that.” Hero.

Just give the woman her own food travel show.