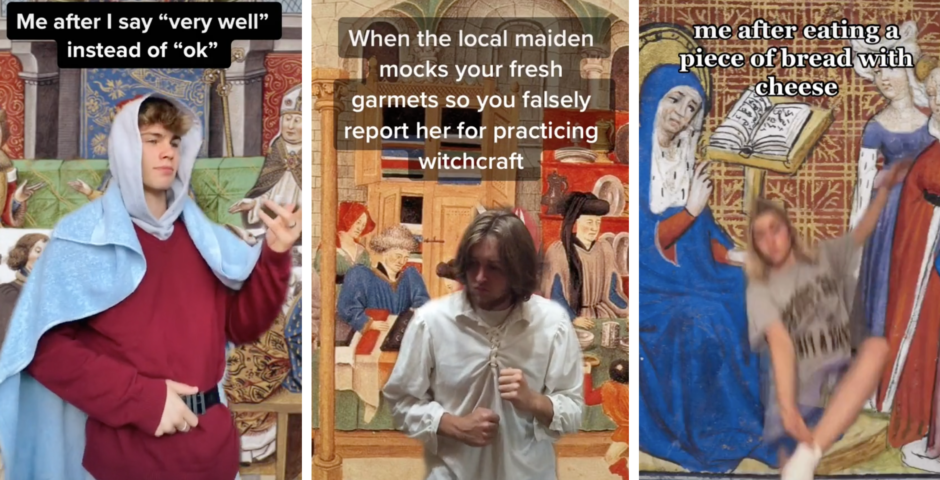 TikTok has really come in clutch during the last few months and if the latest few trends have been anything to go by, the only way is up from here. We’re used to various covers and remixes on the app, from the peculiar pitched up cover of that Russian advert in the form of the mi pan su su sum song to the Taylor Swift disco remix that is EVERYWHERE currently, but the latest offering has to be one of the best by far – the medieval Hips Don’t Lie cover.

The concept is simple. Take a modern pop song, rewrite it to be performed by a load of instruments that would only ever really be used in medieval music, and you’re left with a weird combination between recognising the song and convincing yourself that it’s a tune that you’d likely hear walking down the street in Anglo Saxon England. But where did the medieval Hips Don’t Lie cover come from? And why is the medieval Hips Don’t Lie cover taking off on TikTok?

Where did the medieval Hips Don’t Lie cover come from?

Originating in the late 2000s, there has been an interest in modern music recreated to sound like medieval music for a long time on YouTube, but it is Stantough’s cover of Hips Don’t Lie that seems to have seriously resonated with audiences recently on TikTok.

Now on two million views, the original YouTube version was uploaded on 30 June 2020. If you look beneath the video, there are some pretty amazing comments which have undoubtedly inspired many TikToks, such as one which reads: “Peasant boy, trust mine intuition and mine hips, for they lie not.”

Stantough’s YouTube channel is solely made up of medieval musical covers (I mean, if you can do something really well, why change it?). Other popular examples such as Aqua’s Barbie Girl, Harry Styles’ Watermelon Sugar and Rihanna’s Umbrella have all received hundreds of thousands of views.

What is TikTok doing with the medieval Hips Don’t Lie cover?

TikTokers have now found a unique way to meme the song by referencing the use of older expressions or actions in imagined modern-day situations, whether it’s saying “garments” instead of “clothing” or “farewell” rather than “goodbye”. A quick browse of the #MedievalTikTok hashtag shows some great videos, but here are the best examples that we’ve seen:

@veganhotdog26oh to be a humble shepherd boy gazing out over his flock, wondering how he shall survive thy great plague ##medieval ##ActionLines ##history ##ArtLessons♬ original sound – alien_boy_forest

• From Eric Wakeham to Maverick Baker: Where are the classic OG TikTokers now?