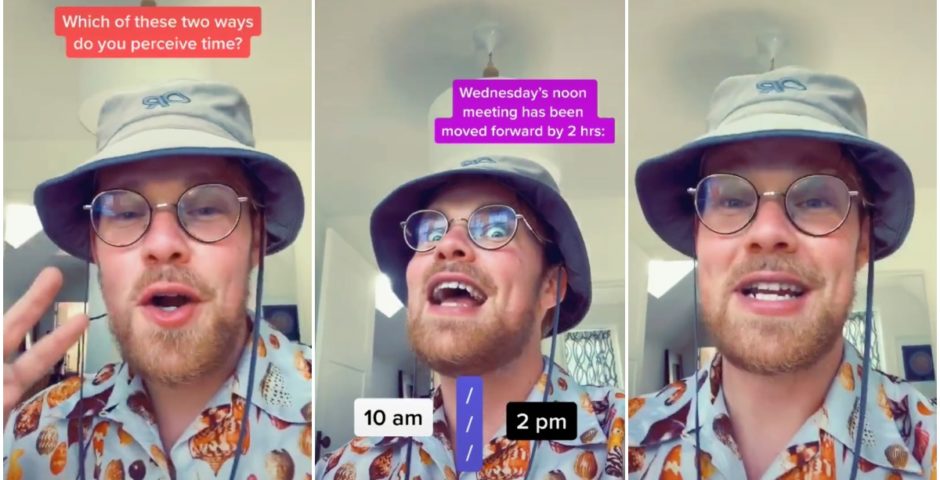 First there was the dress – you know, the white-and-gold/blue-and-black one that made your eyes hurt. Then along came the audio clip which somehow sounded like it was saying both “Yanny” and “Laurel”. But now, there’s a new thing dividing the nation: Time.

TikTok user Asap Science has made a video, explaining there are two different ways people see and think about time.

To know which one you are, answer this question: If I tell you Wednesday’s noon meeting has been moved forward by two hours, what time do you think the meeting’s now at?

The TikTok explains, if you think the meeting is now at 2pm, “this means you have the ego-moving perspective of time. You see yourself as moving forward through time”.

But, if you think the meeting’s moved to 10am, “this means you have the time-moving perspective of time. You see yourself as stagnant and as time moving forward towards you”.

sorry to shitpost but i watched this and was like “who tf would say 10am?” and my h*sband said “me” pic.twitter.com/yd4BYNVRxd

The video ends with the user saying: “You might think that this is insane that someone sees the world or time differently than you, but it’s true.” You’re right, Mr. Asap Science, it is insane, and now I’ve spent too long thinking about time as a concept and my head really, really hurts. (That being said, the answer is most definitely 2pm and if you think otherwise I’m sorry but you are WRONG.)

Right now, the TikTok has over nine million views and 25k comments, which are mainly just full of people disagreeing with each other and getting very confused.