Old TikTok was absolutely elite. Remember Eric Wakeham and his “la da, da da da da daaah, LADIES!” dance? Or the unique kind of anger you got from swiping down to see Cash and Maverick Baker stare at you through your phone? Or… dare I say it… the muffin song? It’s likely, if you’re from the lockdown intake of users on TikTok, you have very little idea what any of that means, but either way you’re about to get an educative experience on how dreadful TikTok always has and remains to be.

What happened to all these people? Do any of the original TikTok stars still make any content, or did they fade into obscurity, never to be heard from again? It’s just a fact that if you weren’t around for 2018 TikTok then you can’t call yourself a true TikTok OG, so let’s see where they’ve all ended up.

Back in the day, Eric Wakeham was a massive creator on the app, most notably famous for the above tune where he slapped on his makeup and gave us all a “good golly!”. Now 19 years old, Eric is still at it with the lipsyncing of various songs and clips from films in his TikToks and, by the look of his Instagram, he’s grown up a fair bit since those days.

Swipe for the returned era 🖤

In other news, Charlie Puth recently duetted Eric’s old TikTok to the audio, claiming that he was the one who made the song in 2014 and expressing shock that it had become big on the app.

Now why on earth have they deleted the original video from their TikTok?! I couldn’t possibly guess.

Gilmher and his brother Jayden are the original brothers who started making waaaay to0 much effort on the app, setting a precedent for people making a full-on career out of it. They’re unfortunately still going strong from their humble beginnings, with Gilmer having accrued nearly 30 million followers on the app and over one million followers on Instagram which is absolutely nuts.

So what’s he been up to since? Most of his other social media channels are left pretty dormant, so it’s hard to tell but judging from his TikTok videos, the last partnered video he had was at the start of July which, if that’s emblematic of anything, it’s that brands won’t touch him with a bargepole. Either that or he doesn’t need the money.

You remember this video. Of course you do. There’s no way that the sheer horror of this video can be erased from even the hardiest of minds.

Anna Bogomolova, a UAL student, has been creating on the app for four and a half years and has worked with brands such as Warner Music, Fila and PrettyLittleThing. She describes herself as a fine artist and so it may not come as a surprise that she’s up to some similarly weird videos as she was before.

URGHHHH. With his annoying brother Cash, Maverick dominated the app circa 2018, and then they kinda just dipped, not to be on anyone’s FYP anymore.

Well, since their heyday, Maverick and Cash have certainly explored multiple ways to get their faces out there, whether that be making music videos together, vlogging for their YouTube channel or carrying on with the TikTok hustle.

They have been in the news for two reasons recently. Firstly, they excitingly signed to Shots Studios, who manage other social media creators such as Lele Pons.

Cash Baker’s rant about Islam that has fans outraged. Cash says “Unfortunately I cannot support other religions because the Bible says that”. pic.twitter.com/yNmvn14rQB

Secondly, Cash recently aroused controversy by releasing a series of tweets that condemned the LGBTQ community as sinners in the name of religion: “Guys, in the Bible it says that one sin is as equal as all sin, and it says man should be with woman and woman should be with man. So, therefore guys, yes, it is a sin in the Bible. But guys, everyone sins. I sin all the time. That does not mean I love you any less or look at you any different.”

Irish TikToker Jacob Donegan was famed for some CRINGE back in the day, which usually manifested itself in the form of doing dances that just didn’t work out all that well for him.

His movements online are actually relatively well hidden that it was difficult to find any social media, but we eventually found his Instagram where he shares a lot of selfies. He still has a merch store where you can get your hands on your very own “Jacubs” hoodie for £28.

He has nearly one million followers on the app, and if anything has changed over the last few years, it’s NOT his content. Adios!

Sorry for subjecting you to that.

Search Sebastian Bails into Google and you are full-on dicked in the face by bright rainbow thumbnails, clickbait titles and more articles than you can wag your fake tanned finger at. Oh yes, Sebastian has been hard at work since his TikTok heyday, and he’s currently living with another creator called Lauren Godwin, who he is in a “relationship” with.

It still seems like he’s going for the child audience from the comments section in this video, who have lapped up the idea that, firstly, Sebastian Bails actually proposed to someone at the age of 20, and secondly that he even has a girlfriend to begin with. Okay!

Recently he courted controversy for another of his videos, where he pretended that he was going off to be in the military, dressing up in a full army uniform. Slightly less recently, he caused controversy for convincing his friends that him and Lauren were in an abusive relationship. 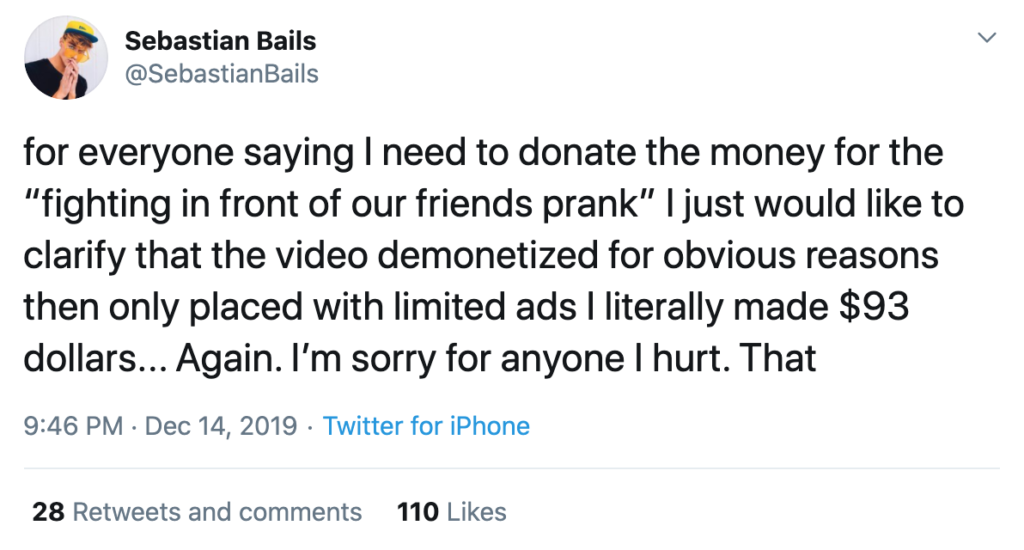 This video must’ve been a turning point for TikTok surely? Before we had our own little community of stupid shit where we’d dwell and barely any outsiders took notice. This, however, took off on a whole other level, with memes being made left right and centre with the iconic RATATATA. This was Vine levels of repetition.

Well, you’ll be saddened to hear that Mutarhuh has deleted every single bit of social media, and the general consensus in the comments sections on both TikTok and YouTube is that he was bullied off the app, but there’s no confirmation from him on this.

With dormant profiles with millions of followers (nearly five million on TikTok alone), his bio now simply reads: “Ty for everything! But I’ve quit TikTok.” You will be missed.

Can you legally call Remy Boy anything other than Remy Boy? The funny thing about this whole scenario is, since being the laughing stock of the app, he decided to feature in as many people’s TikToks as possible to go for the whole “I’m playing along with the joke” thing.

It’s like falling over, snapping your entire fucking leg in two and still trying to laugh it off – not sure if we’re convinced, Remy. Regardless, here’s just a selection of the TikTok’s he’s appeared in since the viral video: