It seems like this season we’ve well and truly had enough of Davina, but couldn’t be more here for out girl Chrishell. We can’t get over Christine’s jaw-dropping wardrobe and have welcomed a new King in Romain.

Here are the best memes about Selling Sunset season three, so far.

christine quinn’s back must be exhausted from carrying selling sunset

3. Come put her in her place hun x

Romain? Where are you? Davina has forgotten her place again. #SellingSunset pic.twitter.com/8pcRHhRKPP

4. This is so accurate it actually hurts me

6. Amanza should have been on it from the start

Just finished #SellingSunset and all I have to say is protect Amanza at all cost. We all need a friend like Mary and fuck Davina and Christine. pic.twitter.com/4NrZKubtjC 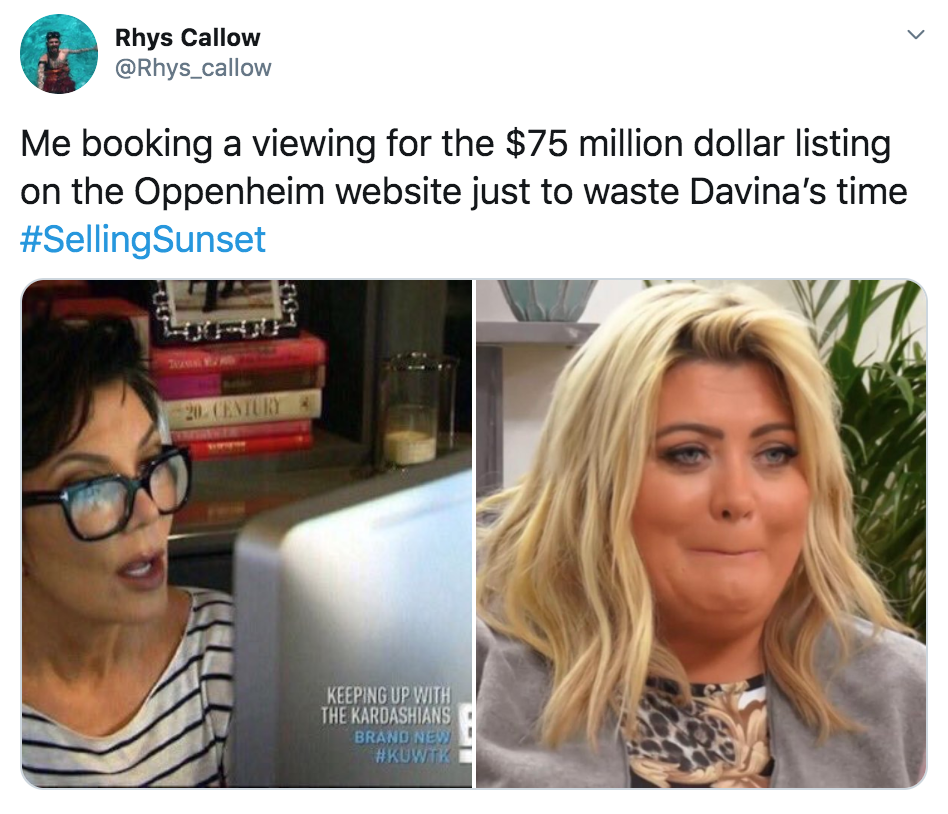 Davina really told Chrishell to her face that there’s two sides??? God what a bitch. Like davina go somewhere else I haven’t even see her sell a house, I’m just gonna assume that she’s a shitty realtor and person. Protect Chrishell at all costs #SellingSunset pic.twitter.com/vp9xll6YrV

10. NOBODY IS STOPPING YOU

Davina keeps saying she can walk away and start her own brokerage….lmao then do it #SellingSunset

12. Everyone deserves an Amanza in their life

I need Amanza as my best friend! Honest without being mean. She and Mary are the real deal. #SellingSunset pic.twitter.com/P0I0fN2lzk

13. Honestly who could do this to our girl?

I really cried with and for Chrishell. Like finding out you were divorced via text and internet. Sis was really in pain and I cannot #SellingSunset pic.twitter.com/rtZDDEqqRg

I can’t with Davina. #SellingSunset

16. This is actually spot on

Inspired by @heyshrazzle, my #SellingSunset Alignment Chart. I will not be taking questions at this time. pic.twitter.com/8hNMoa2kar

Not sure why Justin Hartley is upset over the stuff chrishell said about their divorce when the grown ass man dumped his wife over text message 😂 Justin, you’re a fucking loser. #SellingSunset

My face hearing Chrishell talking about her amazing husband and how lucky they are knowing what’s coming up #SellingSunset pic.twitter.com/dL6ennVbWL

Romain, the real MVP of #SellingSunset … barely said a word all season and delivered his devastating blow in the final minutes of the final episode. #SellingSunset 🐍 pic.twitter.com/Lv2rlHnomo

Who is your least favorite character on #SellingSunset & why is it Davina?

– Romain’s description of Davina was 100% accurate
– Christine’s wardrobe is the star of the show
– Mary and Amanza are the realist and most loyal
– Finding out Davina’s only 30 and Amanza’s 43 shows that toxic energy is bad for your skin pic.twitter.com/WV3ZW8ltwR

The fact we are on season 3 and we haven't seen Davina selling any house #SellingSunset pic.twitter.com/ehcsK9V7MD

27. This is me at least once every episode

Love this phrase. Brett's very protective of Chrishell and it shows. He wants her to be happy. #Sellingsunset pic.twitter.com/HzVVEpBgSE

Today is about Selling Sunset and only Selling Sunset. I’m ordering in a lavish brunch and letting the personality-less modern mansion aesthetic wash over me like a cool Malibu wave. I will not be taking any calls

So if the internet is correct, Adnan bought that property for $5.85m. No wonder he didn’t want to answer when Christine asked… #SellingSunset3 #SellingSunset pic.twitter.com/pWifYmpdmp

32. How does she manage it all day, seriously?

not a soul in the world:

34. We could have told you that much for free

So davina paid for a psychic only to get told “she’s weird” by her. She should have saved her money cause we all knew that 😂 #SellingSunset #SellingSunset3 pic.twitter.com/LMFJUfFm0B

This is how beneficial Davina is to the show – she isn’t even on the Season 3 poster…. Amanza has been on here for less seasons and she made it! #SellingSunset pic.twitter.com/ZcIBGsoSOY