It’s here. The Umbrella Academy season two has arrived on Netflix, and almost as soon as the Hargreeves kids were back on our screens they were stopping yet another apocalypse.

Now, it goes without saying **SPOILER ALERT** for this post, as we have a look as some of the best Umbrella Academy memes to have come out of the second season.

Me before Me after
Watching Ben in The watching ben
Umbrella Academy 2 : in TUA2 pic.twitter.com/XGwpm6P3F8

Ben is dark, mysterious, and he cares about his family. Sounds pretty great. Y’know, apart from that weird octopus thing he can do.

Ben when Klaus summoned him to help him fight
#UmbrellaAcademy

Vanya, Klaus and Allison are the holy trinity of Umbrella Academy. The superior trio who owns my entire heart #TheUmbrellaAcademy pic.twitter.com/qXFkMJUWC7

Me in my room, vibing to The Umbrella Academy’s season 2 soundtrack 😎🎶 pic.twitter.com/fMuNnRPpbH

Alright, it seems like Netflix is tooting its own horn here, but I’ll let them. The soundtrack bangs, and you should get on it.

no one:
literally no one:
me every time ben hargreeves
is even in the frame:#umbrellaacademy pic.twitter.com/csyzdh3ckO

8. Diego, put the knives down

there goes my baby https://t.co/eOS7M1unp4

Much like the housemate who tries to solve everything by going for a pint at the pub, Diego has one solution for everything: knives. They’re pretty versatile though, it must be said; you can throw them, stab with them, chop with them, slice… And, as Diego says, you can “get shanked by” your own father with them. 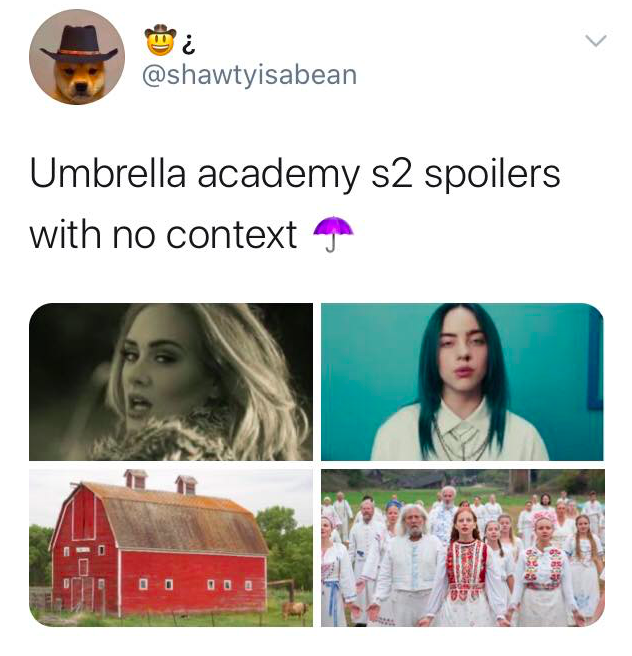 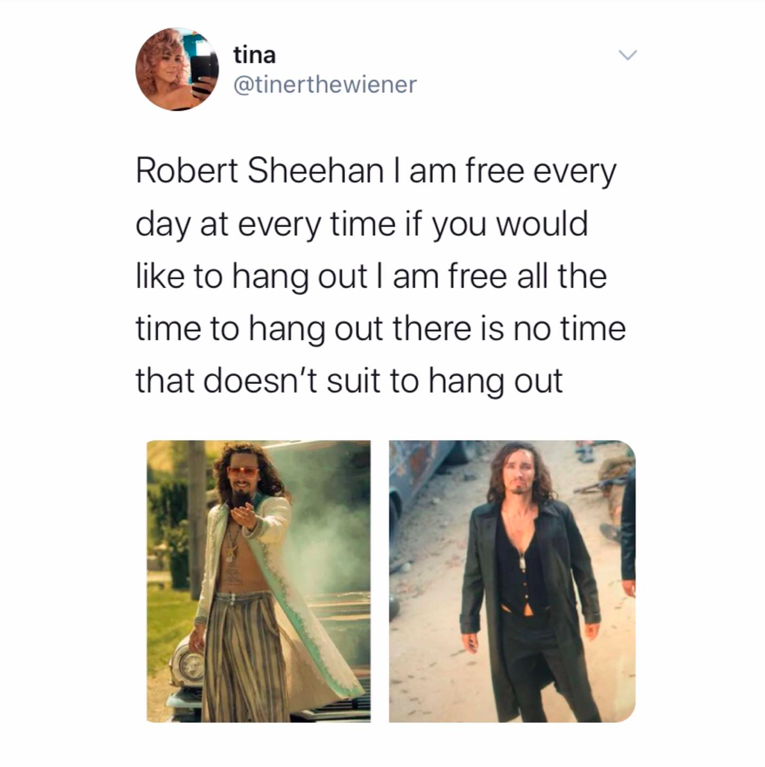 Give him the love he deserves.

The way we’re not getting a new season of umbrella academy until like 2022 pic.twitter.com/8DCwH6Ff39

You know what? Fair enough, that sounds like a solid concept. Someone get onto Netflix about this.

I watch the Umbrella Academy for the plot.
The plot: pic.twitter.com/aXKNh2BqFj

Even if the plot wasn’t banging then we’d all probably still be watching, right? Idk why I’m asking. I know we would.

16. Me when I watched all Umbrella Academy season two episodes in one go

Do not tell me it is not the same person I-💀 HAHAHA #UmbrellaAcademy#theumbrellaacademy2 pic.twitter.com/QEfVrnTxJ3

As we all fell in love with Robert Sheehan’s Nathan in Misfits, so too did we fall in love with his Klaus. We all love Klaus. Klaus should be protected at all costs.

the first 7 mins of s2 of the umbrella academy: pic.twitter.com/IXBt9U1PpL

So in the first seven minutes, Earth was destroyed by Vanya blowing up the Moon; the US was invaded by the USSR and there was a nuclear war; Hazel was shot dead on the street. All in all, a pretty peaceful afternoon for the Hargreeves kids.

Umbrella Academy season 2 was somehow the most relatable of the media I've consumed this year:
A story of fighting off an apocalypse while in the middle of a civil rights movement. pic.twitter.com/NrPmdkIvix

And here we were hoping that the Umbrella Academy would distract us from the fact that the world is ending.

Ben: this is selfish

If we love Klaus (which we do) then we really love Klaus and Dave. If he can help you shop for eggshell paint then he’s the one, folks.

diego hargreeves: everyone else: pic.twitter.com/915e6pknaS

• QUIZ: Which Umbrella Academy family member are you?