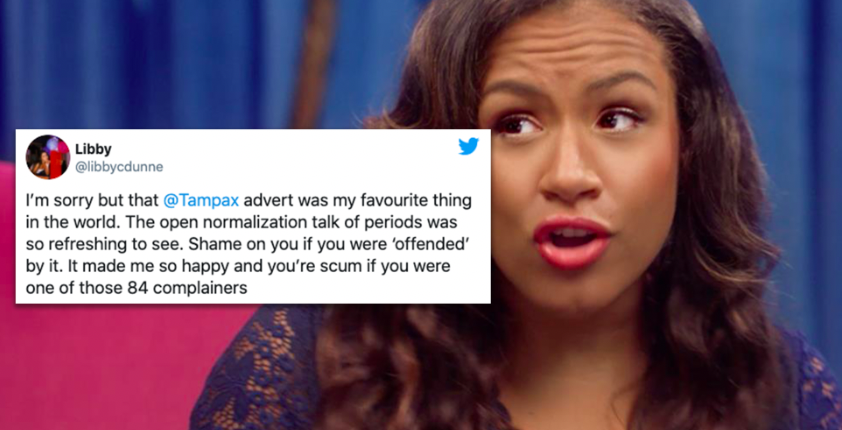 People with vaginas, how many times have you wondered if you’ve inserted a tampon correctly? Have you ever sat down, felt that uncomfy feeling and then had that life-changing moment when you realised you simply weren’t using it correctly?

I can guarantee you that you’re not alone with any kind of technical-tampon issue because those things are quite tricky to get the hang of when you’re growing up and they still freak a few people out, which is exactly why educating people on how to use one correctly is crucial. Those things HURT when you’ve gone wrong somewhere.

An Irish Tampax advert, which showed a presenter asking the audience if they could ever feel their tampon, has been removed after getting 84 complaints. The presenter in the advert said: “You shouldn’t, it might mean your tampon isn’t in far enough. You’ve gotta get ’em up there, girls,” which is… correct.

Twitter quickly turned against the advert being removed and users are motivating people to complain to the Advertising Standards Authority of Ireland (ASAI).

I see some parents on twitter saying the Tampax ad was problematic because they couldn’t explain it to kids. They clearly live in houses with locked bathroom doors or have children with way more respect for privacy than mine because I’ve already had to explain tampons to my 3yo.

Some people said the advert was the start of normalising period talk.

I’m sorry but that @Tampax advert was my favourite thing in the world. The open normalization talk of periods was so refreshing to see. Shame on you if you were ‘offended’ by it. It made me so happy and you’re scum if you were one of those 84 complainers

Irish Times feminist Kitty Holland was understandably angry too and shared an email address for viewers to complain to too.

The email address to complain to ASAI about this madness is: [email protected]
I wonder does the decision maker on this menstruate? #getituptheregirls
Tampax’s TV ad has been banned. Get a grip, Ireland https://t.co/NoOPxrMrxn via @IrishTimesCultr

Some people raised their issues with the lack of openness nowadays in Ireland.

Are we still so uncomfortable about talking about women’s bodies? – if we can’t talk plainly about even periods in 2020 we still have such a long way to go. It is absurd that the complaints were upheld by a statutory body. https://t.co/WDyZugVTRu

Others are talking about why adverts like these are important- to educate people.

Side note: I know sooo many people who have avoided using tampons etc because they don’t know how to use them or they’re scared to use them etc and have missed out on fun activities because of it. I really think ads of this nature could help eradicate such fears.

Both Tampax and the ASAI are yet to make a comment.

• I don’t care about trigger warnings: BBC presenters shouldn’t use the n-word, ever