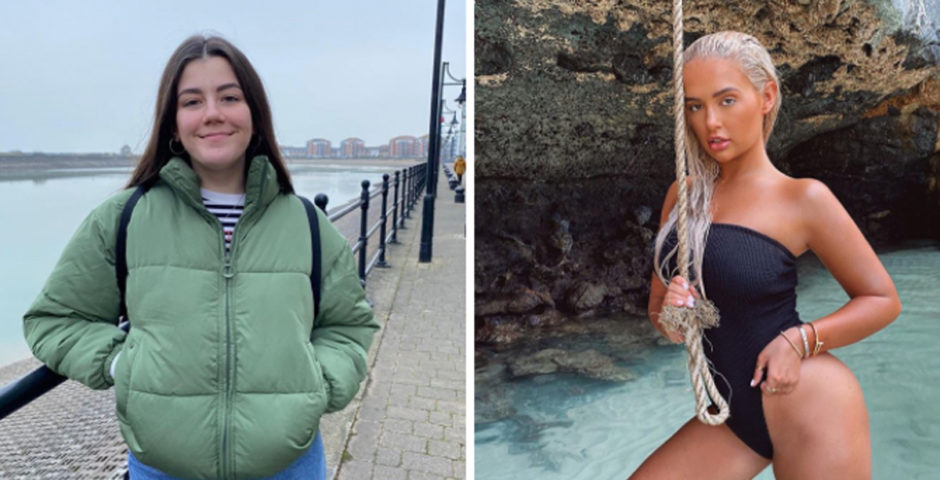 Last week ex-Love Islander Molly-Mae Hague was snapped by the paparazzi in a bikini whilst on holiday with boyfriend Tommy Fury. If you didn’t already see the abuse she faced after simply… wearing a bikini… here’s what you missed. Trolls commented on the pictures calling her “lardy”, “out of shape” and someone even remarked if they had a bum like hers they wouldn’t flaunt it. The level of hate women receive for showing an ounce of “imperfection” is disgusting. And this is forgetting that fact that Molly-Mae is literally the archetype of good looking – she is the standard.

These comments are so vile. “Awful” and “lardy” is apparently how to describe a normal womans body?? pic.twitter.com/TLQB4nB3M9

Recently I’ve been trying to gain some confidence in posting pictures of my own body on social media but was completely set back by the comments I saw Molly-Mae receive online. If anything, trolling female Love Island stars face online has made me even more conscious about how much of my body I expose on social media. It makes me genuinely confused to see comments calling Molly-Mae ‘lardy’ when she so visibly isn’t. And if she’s lardy, what am I? What is every girl above a size 10? These kind of comments are exactly why I, a size 14, won’t even post an Instagram picture with my legs in it, let alone in a swimming costume.

When people berate slim Love Island stars for falling short of perfection at any opportunity, it makes me think about how far I have to go until I reach the “desirable” look myself. It’s near impossible, and my personal experience isn’t even the half of it. Every woman has to measure up to these standards. Speaking of, we haven’t even touched on the double standards of it all.

Can someone please explain to me why a woman like Molly-Mae is called fat, but a man who has a beer belly is a desirable aesthetic, a “Dad bod”? Why can men literally get away with the bare minimum effort but women are bombarded with hatred and body shaming when pictures were taken of them from a bad angle, without their consent? Men with dad bods are glorified all over the media, a man who is overweight is essentially praised and considered sexually attractive by many people. It’s not fucking fair.

One man commenting on Molly-Mae’s bikini pictures embodied this hypocrisy completely. I mean, I can’t entirely make out what he’s saying because he appears to have a struggle typing but I’ve paraphrased to help him out. He commented: “Ha, my arse looks better than that an I’m rotund, to say the least. And a bloke.” I can guarantee, 53-year-old Pete from Northampton, that your bum does not look better than Molly-Mae’s. Society just doesn’t care about your arse as much as that of a perfectly fit young woman’s.

Women are forced to ‘desensitise’ themselves from the abuse

Recently on her Instagram stories, Molly-Mae has said that she has pretty much “desensitized” to the hate she receives online. This in itself is devastating. Imagine being bullied online to the point where you’re forced to say it has no effect on you anymore. You and I can both assume that Molly-Mae saying she’s become numb to the hate is just another way of trying to get it to stop, but she shouldn’t have to be. She shouldn’t have to worry that every time she steps out in a bikini, men across the world will be critiquing her body from behind computer screens. And it’s not just men’s fault either.

Love Island has its own part to play

One of the reasons we fixate on Islanders’ bodies is because they’re upheld as the epitome of attractiveness. This means anything slightly different (to say, larger) is treated as freakish. Throw back to last summer when Anna Vakili joined the cast and was widely considered to be a “good move” for Love Island, who had finally added a “plus size” woman to the line up. But she’s not plus size… she is curvy. Love Island thought they were showing body diversity by casting Anna, someone tell ITV that curvy doesn’t mean plus size, and the most common dress size in the UK is 16. That might get them thinking straight.

AHHH been holding this in for months and finally I can scream to the world lolll I’m Anna’s sister @mandi_vakili and I’ll be running her account while she’s in the villa!! I can’t wait for everyone to see how beautiful Anna is on the inside as well as the outside she has a heart of GOLD and her face and body 😍 everyone who knows Anna knows how sweet she is so let’s support her ALL THE WAY!!! – – – #loveisland #loveisland2019 #annavakili

This all affects the young women watching from the sidelines

Social media is hugely influential and should be used more to spread body positivity; instead, it’s used to attack one person in the spotlight and make all their followers question their attractiveness and desirability. No wonder women, including myself, have such fear posting bikini selfies when actual models are dragged for having an inch of cellulite or lump of fat.

Moreover, young women are told to never get cosmetic procedures to “fix” this, lest we become “fake”. But at the same time if we aren’t the right level of attractive, or we don’t meet society’s beauty standard then we are deemed unattractive. What the fuck has a girl got to do?

Luckily for me, I am surrounded by kind, supportive people that quell the harshness on social media. But I have no doubt that if I went to the right place on the internet with a picture of myself in the bikini I would face ridicule. Even if I didn’t see the comments myself, my brain is now programmed to think that my body isn’t attractive and I should hide it. And the fact that Molly-Mae’s body is pretty much flawless in my eyes just makes me look at myself in an even worse light.

When Molly Mae replied to the Daily Mail online comments on Twitter, she said: “I would genuinely love to know who writes these comments? Like how can you actually write shit like that and sleep at night? Beyond me.” Whilst I am – luckily – able to sit here and say I’m not going to prioritise society’s beauty standards over my health, other young women might fixate on these comments and go to dangerously extreme measures to attain the ‘perfect’ body. We break our backs over the opinion of anonymous haters, and they form a constant critical voice in our heads.

The sooner online trolling stops and slim Love Island stars aren’t called fat, the better. Before commenting on anything online, please question if it’s going to benefit someone and ask what reach it has. Your words affect more than just the person they’re aimed at – and even they haven’t got as thick a skin as you think.

• ‘I have become so desensitised’: Molly-Mae claps back to even more online trolls