I reread the GCSE poems we studied and honestly wtf did they make us learn?

GCSE English Lit lessons were those near daily occurrences in which you would leave the classroom feeling like your hand had fallen off as you’d casually ripped apart every single letter of a Simon Armitage poem to discover what the poet really meant when he talked about the clown punk.

Usually it actually wasn’t that deep but your English teacher really tried to convince you there was a specific reason why that full stop was in a certain position. If you didn’t finish analysing a poem with the entire page covered in highlighted notes and arrows flying off left, right and centre then you were destined for a C.

From points on similes, metaphors and onomatopoeia, to historical context, to rhyming sequence to narrative, not one bit of paper was left untouched with your incredibly insightful (basic) commentary on what the poet meant by the word “rows.”

My waffling started when we had to analyse poems in English literature from this anthology pic.twitter.com/F3wjqiWO0P

Once you’d gotten past identifying all the key elements of the poem you’d move onto the meaning of the poem as as whole. And looking back some of these poems were incredibly messed up.

Misogyny and power over women seemed to be a running theme as well as the pain and savagery of war. On a lighter note some of the poems were just plain weird. Like the Nettles poem where the poet describes his son falling in a bed of nettles or Carol Ann Duffy saying she’d give her valentine an onion. Don’t get me started on Ted Hughes writing a poem from the point of view of a hawk who seems himself as god.

And there was an awful lot of thinly hidden sex references that you had to decode whilst sitting next to a boy who laughed about “vegetable love”. Yes we know it meant his penis was growing, thank you Josh.

I dug out my old AQA anthology and reread all the messed up poems we studied when we were 15 and honestly what were our teachers thinking? Look I’m not out here claiming to be the next Poet Laureate. Writing poetry is so difficult. But what I question is why did the exam boards and teachers think these poems were our best introduction to the world of poetry?

These are some of the weirdest and most messed up poems we encountered during our GCSEs:

My Last Duchess by Robert Browning

First of all this poem was so long, 56 lines of rhyming couplets to be precise. If you managed to annotate all of that I’m impressed.

The poem is about a Duke showing off the painting of his recently dead young wife. He basically admits he was responsible for her death because of his insecurities over her “flirting” with everyone. He’s cold, weak and uses his power to gain control over her.

It’s inspired by a real life Duke from the Renaissance and like most things in life we only hear the man’s side of the story. But hey at least we got exposed to men’s violence against women early in life right?

Most messed up line: “I gave commands;/Then all smiles stopped together.”

Ok so on one hand this poem is a great insight into the life of a shopkeeper. On the other hand it’s filled with loads of cringe lines about sex that no one should have to analyse with their balding English teacher.

And the last stanza where the guy is saying his wife is better than the moon – what a simp. 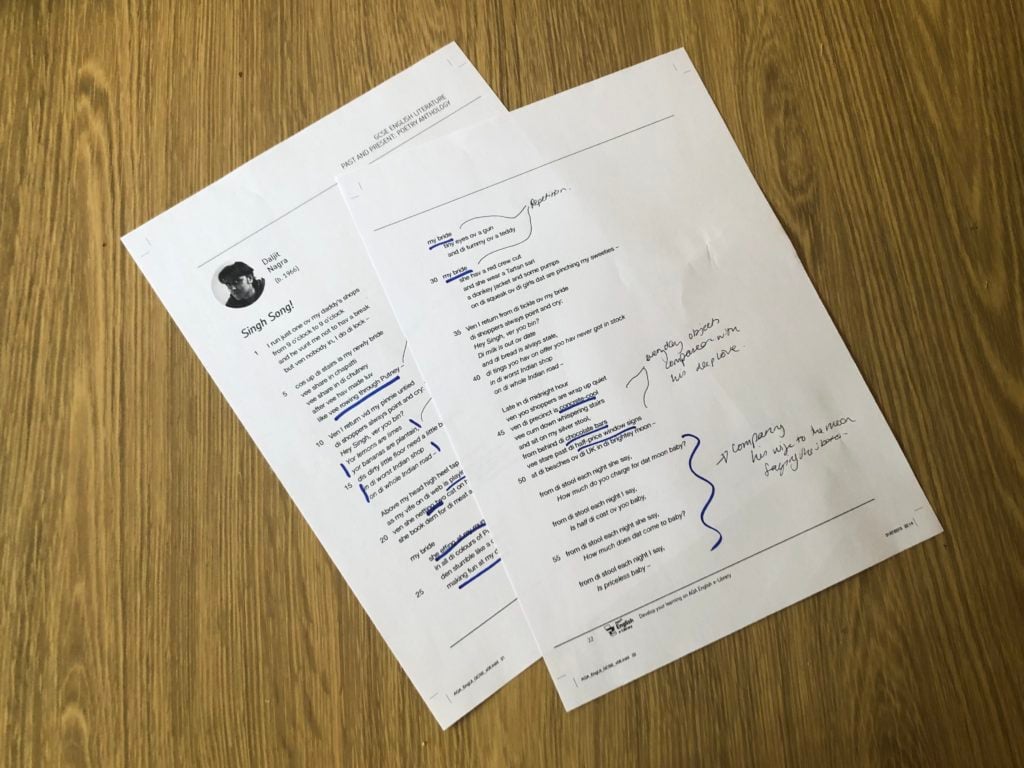 Most messed up line: “after vee hav made luv/ like vee rowing through Putney –”

The River God by Stevie Smith

The narrator of this poem, who is meant to be the river, sounds a lot like Joe from Netflix’s You. Throughout the poem “the river” describes pulling beautiful women into the river and keeping them there against their will.

It’s full of creepy, pervy and extremely possessive language. It’s just one of the many poems we studied that portrayed women as objects.

And yes Stevie Smith is a woman who wrote this poem so she’s most likely done it drawn attention to the issue. But I could have got through GCSE’s without reading the words: “So I brought her down here/To be my beautiful dear.”

Most messed up line: “And I like the people to bathe in me, especially women.”

The Manhunt by Simon Armitage

This poem is about a woman and her partner’s experiences in the army. That’s not the bad bit. The incredibly cringe bit is the awful metaphors to describe his body throughout.

“The frozen river which ran through his face” aka a scar and “the foetus of metal beneath his chest” aka a bullet, are just some examples of Simon uses. Just say it like it is.

If you want more serious reason as to why this poem is garbage – it’s all about the man and his experience and how she can heal him. There is no insight into her thoughts and feelings despite it being told from her point of view.

Most messed up line: “Only then could I bind the struts/ and climb the rungs of his broken ribs,/and feel the hurt/ of his grazed heart.”

In Paris With You by James Fenton

Was the purpose of our English lessons to learn about disappointing men right from the get go? Cause this poem is sleazy af.

It’s all about a man on the rebound and sleeping with a woman in Paris. He doesn’t want to talk about his past relationship or explore the city. He just wants to stay in a hotel room and have sex. Of all the poems in the world, this is the one the exam board thought should be a crucial part of our education.

To His Coy Mistress by Andrew Marvell

This poem is literally about a guy trying to convince a girl to shag him because one day they’ll die and if she doesn’t sleep with him she’ll end up a virgin who is eaten by worms.

Forget flowers or chocolate – our English lessons showed us the real way to get a girl into bed. Tell her about her impending death with a side of a penis metaphors and you’re onto a winner.

Most messed up line: “then worms shall try/ That long-preserved virginity,”

Ok so it wasn’t in the anthology but we can’t let this poem go without comment. Carol was the Poet Laureate at the time of our GCSEs which meant she was in literally every poetry collection going.

And you couldn’t escape this poem about giving her lover an onion as a Valentine’s gift. Back when you first read it you probably thought how inventive it is. But now it just seems weird and if anyone gave you an onion as gift you’d be dumping them on the spot.

why is carol ann duffy trending lol. she literally gave me a mental breakdown trying to analyse a fucking onion.

Also you now just see how thinly veiled all the metaphors were. A relationship has layers just like an onion? You got me there Duffy.

Most messed up line: “I give you an onion./It is a moon wrapped in brown paper.”

•Quiz: How much GCSE English can you remember?

•Quiz: How well do you actually remember GCSE biology?