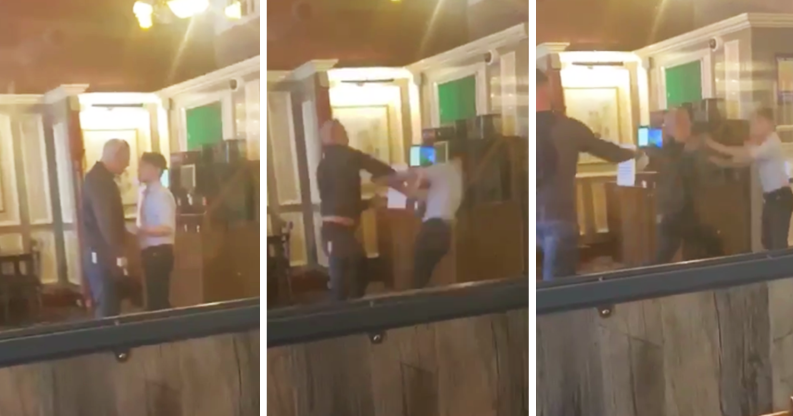 VIDEO: Man punches manager of Bristol Spoons in the face after not getting served

A man has been videoed punching the manager of a Bristol Spoons in the face after being refused service.

The video, taken yesterday by an onlooker in Bristol’s Berkeley pub, shows the man berating the manager, before squaring up to him and then punching him in the face.

As another staff member tries to help, the man is dragged away from the manager and escorted out of the pub. Wetherspoon says the police have taken CCTV footage as evidence.

A drunk man punches the manager in a Bristol Spoons after being refused service pic.twitter.com/4CesDwShXl

Ieuan, 19, had come to Bristol for a quiet post-lockdown pint with his cousin when the altercation kicked off. “I was shocked and disappointed by the behaviour,” he told The Tab.

“The man came in very drunk, you could tell. Him and his friend went to see another two men who were already drinking.

“He got refused alcohol, then kicked off and started abusing staff and everyone else in the pub. He was shouting and swearing.

“After the punch, he did leave the pub. We saw one of the group later eating a kebab like nothing happened.”

Wetherspoon spokesman Eddie Gershon told The Tab: “ The people concerned were refused entry on the grounds that they had had too much to drink before coming to The Berkeley.

“ The shift manager asked them to leave and the group became very aggressive and one of them punched the shift leader.

“This was logged with the police who have taken CCTV evidence today.

“The shift leader who was punched sustained no serious injuries and has provided the pub manager with a statement of the incident.

“We completely condemn this horrendous violence towards a member of our staff.”

• Boycotting Spoons is actually the opposite of helpful. Sincerely, Spoons staff