Right at this very moment, I should be ambling around one of Glastonbury’s fields, trying not to drink too many of my cans or get too sunburnt to sleep.

Except I am not, and neither are you. Most likely, you’re trying to find the one bit of your living room that isn’t yet a furnace and debating whether to watch any of the frankly unnecessary amount of Glasto coverage laid on by the BBC.

It’s too painful, thinking what might have been. So here are a collection of stories from assorted Glasto-goers which might make you think twice – all the way from humiliating celebrity encounters to horrific sunburn.

It was Sunday night at 4am and everything was closed. Instead of going straight back to our tent, we went to visit a couple of friends who had a fancy tipi in the celeb spot next to the Park Stage. We were gathered around this cute fire pit they have in there, surrounded by strangers, talking shit to anyone who would listen. It’s boujee af in there, and you’re only ever a few metres away from someone famous, so we tried our best to hold it together. Unfortunately, someone got the ketamine out, and I did too much. So much that I slowly slid off the bench and onto my back in the grass. All I could do was lay there and wait it out, with one hand outstretched to my friend, while she continued chatting everyone up around the fire. At that very moment, Cara Delevigne came over and said hello. She saw me on the floor. She left. Cara Delevigne saw me in a k hole. Cool. 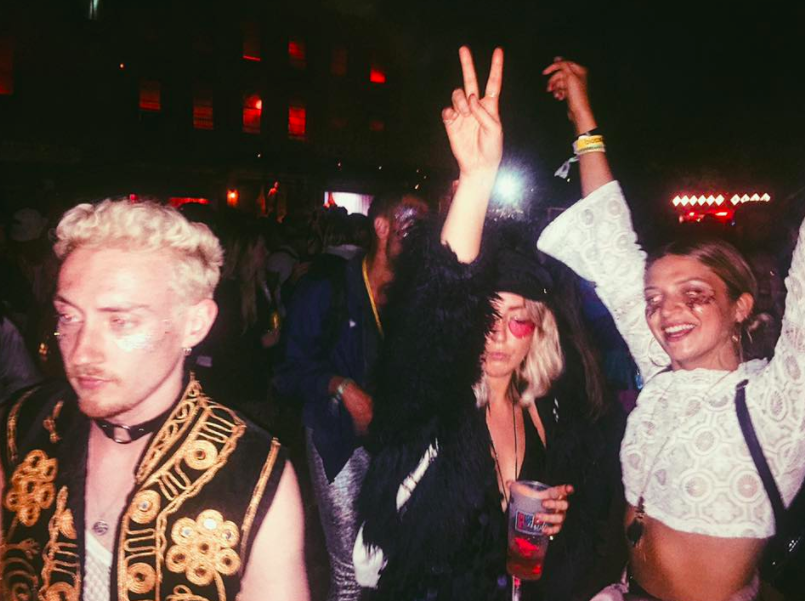 The Secret Piano bar is the stuff of Glastonbury legend. Every world-weary Pilton veteran will give you a slightly different description of where the bar – a tiny hole in the ground where drunk Irishmen sing piano songs, occasionally joined by Michael Eavis is – lies. Over a few years of going, we’d heard all kinds of vague locations, all centring on, probably, some hedges by the Stone Circle. One Saturday, after years of hearing about it, we set out to find the legendary bar.

We sat by the Stone Circle, scouting out possible locations, until we’d established a pattern – over a few hours there was a trickle of people sneaking past a fence covering a gap in a hedge. None returned. This had to be it. We summed up all our courage and wandered confidently past the fence.

Approaching what looked like the entrance to at least something – the bar is famously dug into the ground – we were met by an Irishman jumping out from behind a tree. A good sign.

However, holding a brownie and wearing leggings, the man met us with hostility. What were we doing in this part of the festival? Secret Piano Bar? Never heard of it. There’s no such thing.

Then what was that behind him? He didn’t look like security, but he wouldn’t say. Instead, he got shouty and ushered us back to the fence we’d came from. Defeated, we’re convinced to that day we failed some kind of test.

I once got caught breaking into the Rabbit Hole by going under the fence by a security guard. Luckily I managed to bribe the security guard with a gram of mdma and he turned a blind eye 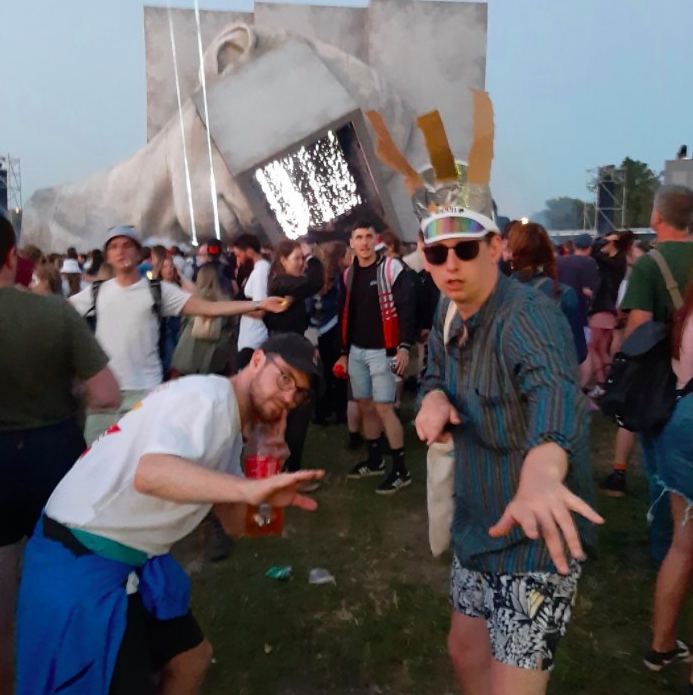 Arriving at Glasto on a Weds is great – a whole extra day at a festival, especially if the weather’s blazing hot like it is this year. Problem is, there’s very little to actually do except laze around in the sun drinking all your tinnies. By the time the tinnies were finished, it had dawned on me I’d caught the sun a bit. It wasn’t until the Friday that I realised how badly the back of my neck was red and blistered. More specifically, it wasn’t until I put someone on my shoulders and the blister burst.

Fast forward two days of blazing sun and no showers, and it’s festering. Really, really festering, to the extent my girlfriend said she couldn’t bear to look at me in case she caught a glimpse of my neck.

3am, Shangri-La, the designated ‘big’ night of the festival. We’re all sitting down by a water fountain trying to calm our jaws down when a big American man walks over and asks how this thing works.

Now, we’re half right. It was the famous film star, but his name is Matthew, not Michael. In response, he winks, does the weird chest beating thing from Wolf of Wall Street, fills up his bottle, and fucks off.

Idris Elba was running around Avalon, followed by loads of people trying to get pictures. Stacked it on one of the ropes holding up a big top. Absolutely flopped. 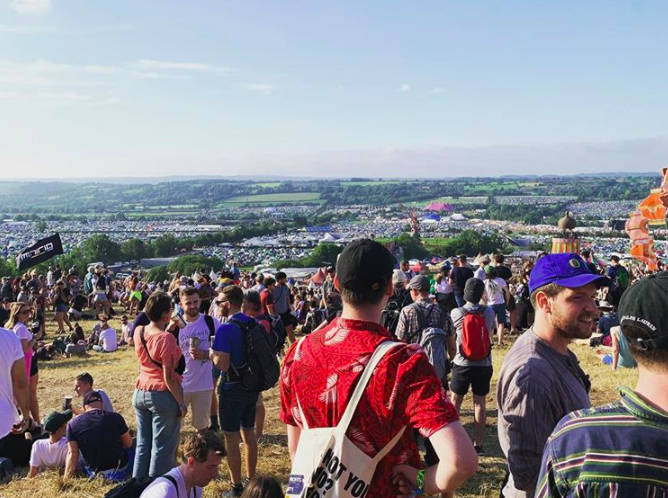 I’m tripping at the Stone Circle, can’t really move. Florence Welch, fresh from headlining the day before, is walking straight towards me. For some reason, overwhelmed, I sort of collapse as she approaches. She simply steps over me. 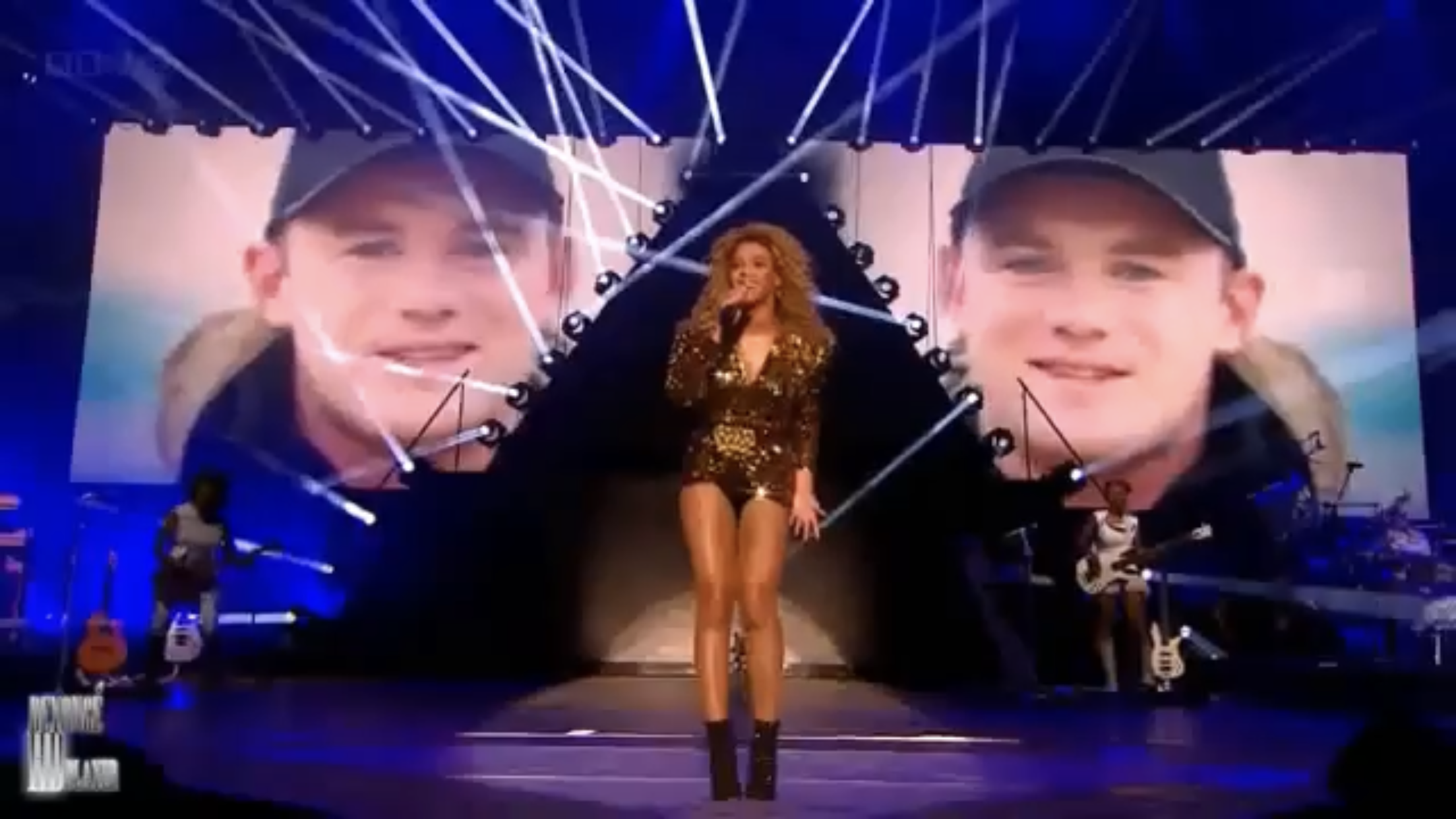 To be honest, this isn’t even that funny, but the whole vibe at Glastonbury as Brexit happened was…something. Hearing people all around the campsite getting texts in the early hours of the morning and talking about it with weird disbelief. 250,000 very sombre people all traipsing around the festival in a bit of a sulk while the rest of the country went into absolute meltdown. Very odd.

As a ketty junior doctor, I saved someone’s life with a Haribo

I’m a junior doctor, and I was just tucking into some K – literally nose to key – when someone hundreds of metres away shouted “medic”. I ran straight over, where someone was having a hypoglycaemic episode and gave them a Tangfastic. They recovered, and I swiftly ran back to tend to the rest of my K. I just hope they didn’t realise I was basically in a K hole when I saved their life. 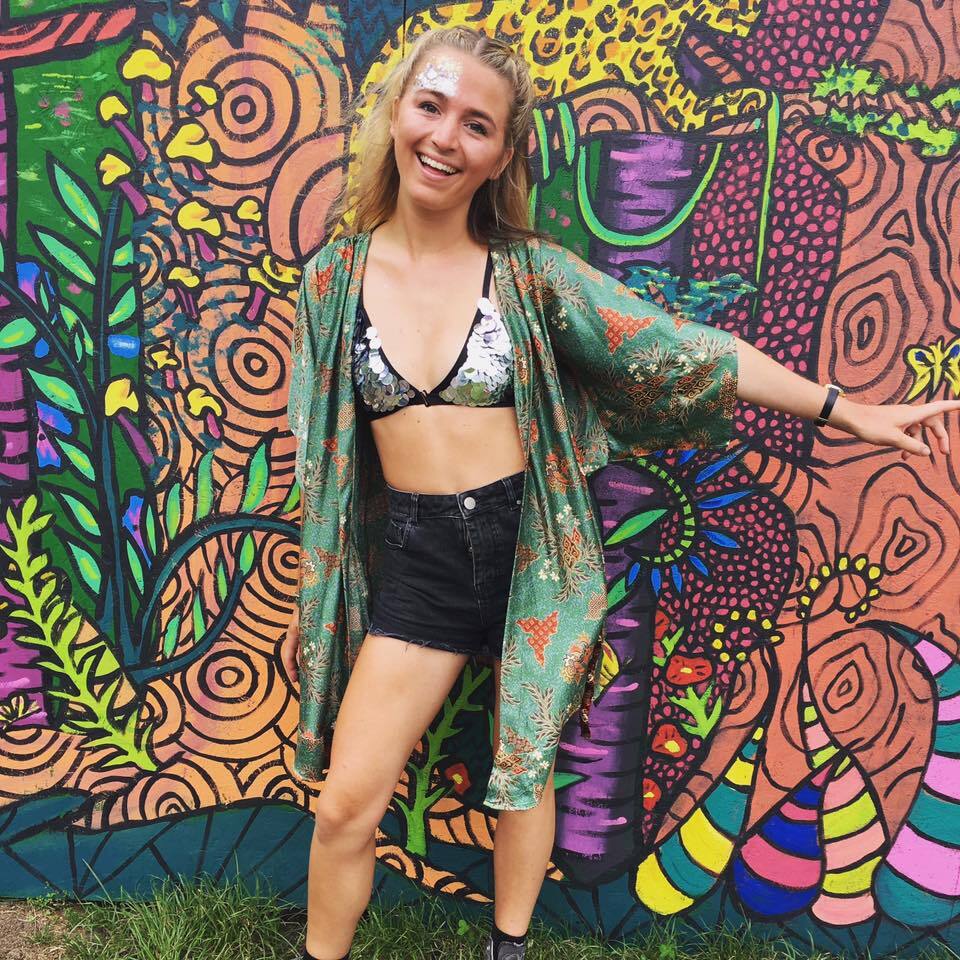 Crying at the Dalai Lama on a Sunday morning

Everyone’s a bit fragile on a Sunday morning, but you’ll drag yourself to the Pyramid stage for whoever’s playing. Patti Smith was doing a set and going very very hard, slipping about all over the place. About halfway through the set, she stops and says “I’ve got a friend whose birthday it is. I’m going to bring them on stage, and I’d love for you to sing him happy birthday.”

We thought it’d be some rando aging rocker. It was the Dalai Lama. To make things better, she even wheeled out a cake which he cut. He gives the most wonderful speech about peace and love, which obviously hit hard with the state everyone was in. The whole field sang happy birthday, we look round and everyone is crying. Someone’s mum is even with us, and we’re all crying and hugging her. Surreal.

Just got really confused about my phone

In my first year at Glasto, I knew the phone signal was bad. So when I’d tried all night to call people from my phone, putting it in my pocket, texting people from it, and gotten nothing back, I put it down to that.

It was only in the morning, when I woke up with a pocket full of chocolate, that I realised I’d mistaken a Feast ice cream for my phone all night.

Mark Ronson did not want to flirt with me

It was 6am and one of those nights where you join all the crusties at the Stone Circle. I looked like a crusty myself, and as I was sat on the hill glaring into the distance I saw Mark Ronson on his own (big fan). Naturally, I shouted to no one “omg it’s Mark Ronson” to which turned his head and looked at me, held his finger up to his lip to shush me. I tried to flirt and did a shush back to him and for a second I thought we’d had a moment but now I look back I realise he really did just want me to shut the fuck up. 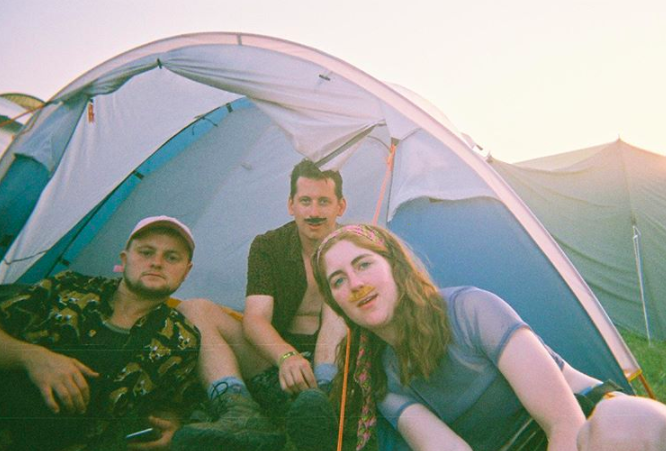 A mate of a mate hadn’t seen his old man in several years. Goes to Glastonbury and gets super fucked up. Bumps into his dad and is in disbelief that it’s really him after it’s been so long.

They get even more properly on it and have an amazing evening. He wakes up the next morning and texts dad asking to meet up. Turns out he’s just texted his estranged father and he’d spent the whole previous night with some complete randomer.

I was having the best week ever of my life. I’d just finished my degree and my boyfriend had asked me to marry him. We both had matching, custom made (and very expensive rings). I was skeptical about wearing mine to Glasto but I went for it, because I never usually lose things. On the very last night we all went to the stone circle and I made balloons for everyone. We then went back to our tent and I realised I had lost my ring. Like properly. I made all my friends come back to the stone circle to look with me, but of course, it was gone. Yep, I lost my fucking engagement ring making a balloon at Glasto. 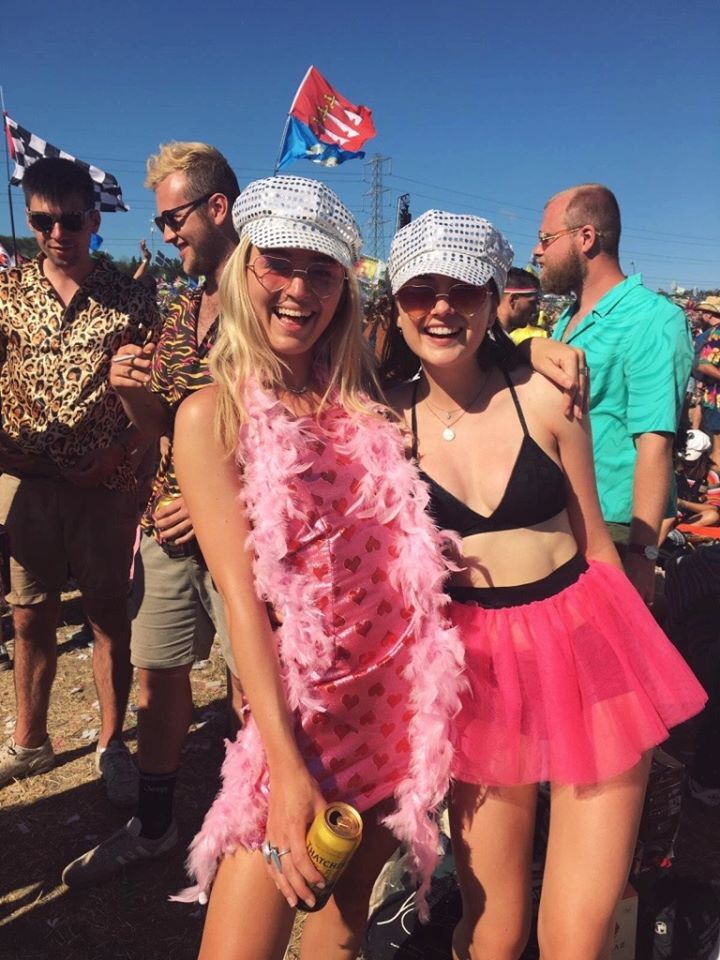 Spent the end of the night in my tent, alone, fucked, eating a packet of roasted and salted pistachios. Used up about an hour sorting the shells into two piles, eating a pistachio and determining whether it had been roasted or salted. It was only at the end of the packet, with two huge piles in front of me, that I realised every single nut is both roasted and salted.

On the way to a big night out, coming up a bit, we walked past Glasto Latino on the way to the South East corner. Someone was doing salsa classes – at about 1130pm – and everyone was really going for it. Unfortunately, we got too into it, and I ended up throwing up everywhere from the exertion.

We were camped in Pylon, and one morning I literally woke up to a woman saying “want any K mum?”. The reply was “No thanks sweetheart”

• Here are the best dressed people from this year’s Glastonbury