The mum has been getting death threats

In the past few days, one of the weirdest videos from TikTok has been going viral, showing a swimming instructor literally chucking a baby in a pool. Yes, really.

The video has divided opinions, with some being completely shocked that someone would just casually throw a baby into a pool like that. But there is actually a very logical explanation behind the video.

Excuse me but what the fuck? pic.twitter.com/3qqlDr0mZa

The video was first posted on TikTok by Krysta Meyer, an American mum of two boys. The video is of her eight-year-old son Oliver, and has been going viral over the last couple of days. It’s had over 22 million views on Twitter and 53 million views on her original TikTok post.

Some of the comments on the TikTok include: “Dropped him in there like a bath bomb” and “WHAT THE HELL HOW DID IT NOT DROWN”. It’s safe to say, people are shook. Krysta Meyer told BuzzFeed News: “A lot of people are seeing a kid being thrown into the water and thinking, ‘that’s not good! You shouldn’t be doing that!’ I’ve gotten death threats. I’ve had people tell me I’m the worst kind of mom, that I’m endangering my children, that I’m traumatising them.”

Everything I do is for my kids. They are my world. ❤️ they are thee most important people in my life and I will do everything I can at all cost to protect them and to give them life.

But the video was actually taken at the Little Fins Swim School – an infant survival class. The original TikTok was captioned: “Oliver amazes me every week! I can’t believe he is barely two months in and is catching on so fast. He is a little fish.” 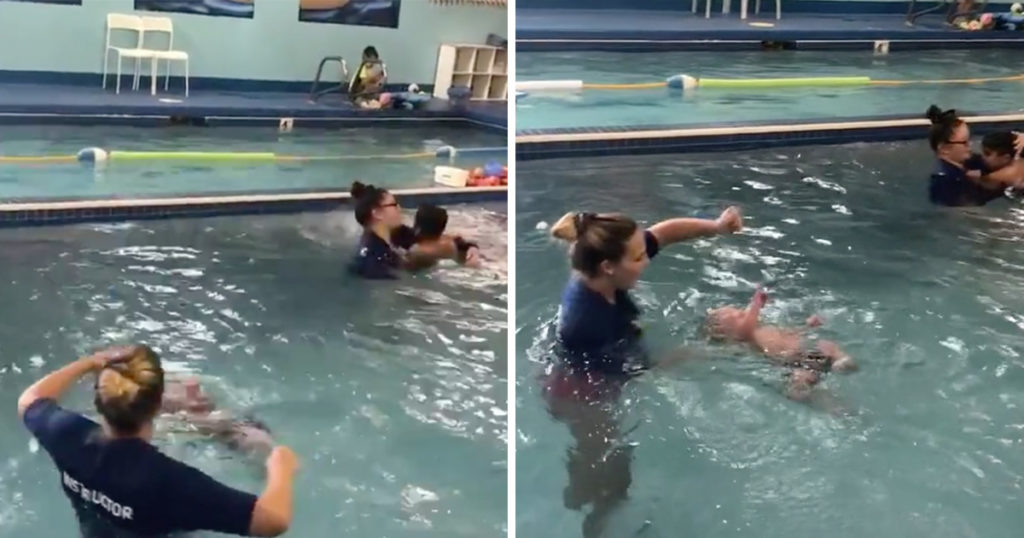 The class is all about safety, with Little Fins co-owner Lauri Armstrong telling BuzzFeed News: “We teach eight-month-olds to assess their situation and find an exit strategy [in water]. I know it seems crazy.” The class hopes to not just teach infants to swim, but also get them comfortable in water and help them learn what to do if they fall in, and how to flip-over onto their backs and float.

Dr Francoise Freedman, a medical anthropologist at the University of Cambridge and the founder of Birthlight, said in a report: Drown-proofing methods through floating have been around for decades, but the techniques are becoming more prevalent and have recently caught widespread international attention – leading to us, uniting as an industry in the UK to speak out about our concerns.

The report looks at how viral videos show “distressed young learners” in these situations, and the classes have also been called “harmful”. But Water Smart Tots says children should be taught “water safety and swimming skills as early as possible.” The Infant Swimming Resource, says these types of classes and the skills learned have saved “more than 800 lives”.

• Ok so just who is this viral ‘giant baby’ everyone has gone wild for?

• Quiz: Can you guess the celebrity from their gender swap filter picture?