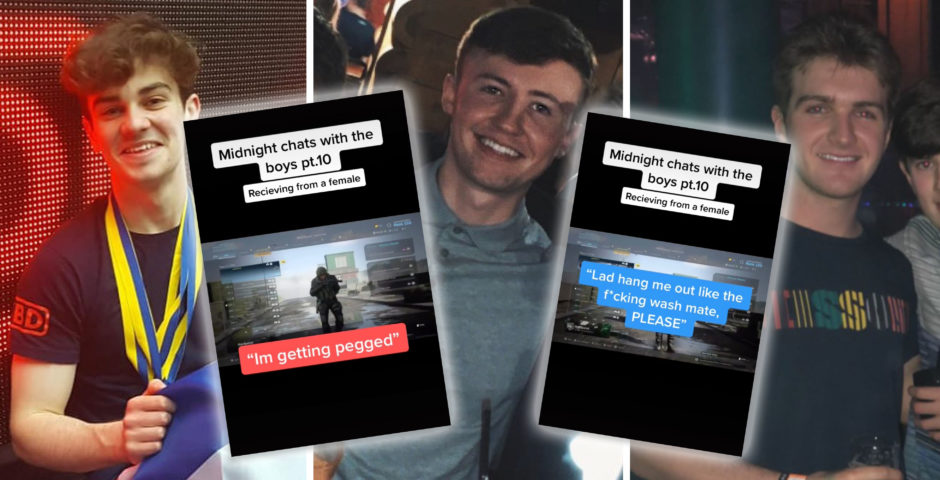 ‘Midnight chats with the boys’: We found the Scouse lads from the Call of Duty videos

Think about when you call up your mates for a standard lockdown Zoom chat. You ask them how their week went (it was boring), whether they’re doing anything with their weekend (they aren’t), and when they reckon life will return to normal (2021 probs). Well for Joel, Luke, Beans and Harrison, conversation kicks off with one of them saying: “wouldn’t mind to get pegged like.”

In a video that’s now been seen by hundreds of thousands across Twitter and TikTok the boys discuss the prospect of getting pegged with enthusiasm over a game of Call of Duty. “Hang me out like the fucking washing, mate, please,” one of them says. “I’d be arching me back and everything mate,” says another.

Luke says: “D’ya know what? If it was a 10+ year-long relationship, it’s a high possibility. Other than that, it’s gotta be a no from me.”

“Yeah innit, ” Luke continues. “Nails have to be trimmed prior. With the proper precautions, the right execution, and clear instructions, I see no issue as long as it’s a long-standing, loving relationship.”

In their second most popular midnight chat for example, they ponder whether they would eat an apple hundreds of other men had come on provided the apple had been washed afterward. It’s prefaced by talking about “slags over-sexualising themselves” on Instagram. When Harrison asks me if people rate the videos I tell them the sexism hasn’t gone unnoticed. Do they regret some of the language now they’ve gone viral? “Not at all,” says Joel.

Beans says: “It’s only offensive if they take offence, which they shouldn’t. It wasn’t directed at any of them, like.”

“Nah, no regrets,” says Luke. “Snowflake generation needs to learn. You can joke about anything.”

The boys are all 19, and tell me they’re all off in different directions soon. Joel is at Liverpool John Moores Uni, Luke’s on a gap year, Harrison’s off to study in America, and Beans is joining the navy. Does this mean the midnight chats might be nearing their end? Is there a goal in mind? “No, not for a while anyways. Content isn’t stopping,” says Beans.

“Don’t even think there is an end goal yeno,” says Harrison. “Just goin’ with the flow for now I think, everything still the same.”

Luke meanwhile, wants to make the jump to YouTube and streaming. “Hopefully make some sort of career out of it,” he says.

• The Love Island rich list 2020: Which stars have the most millions?