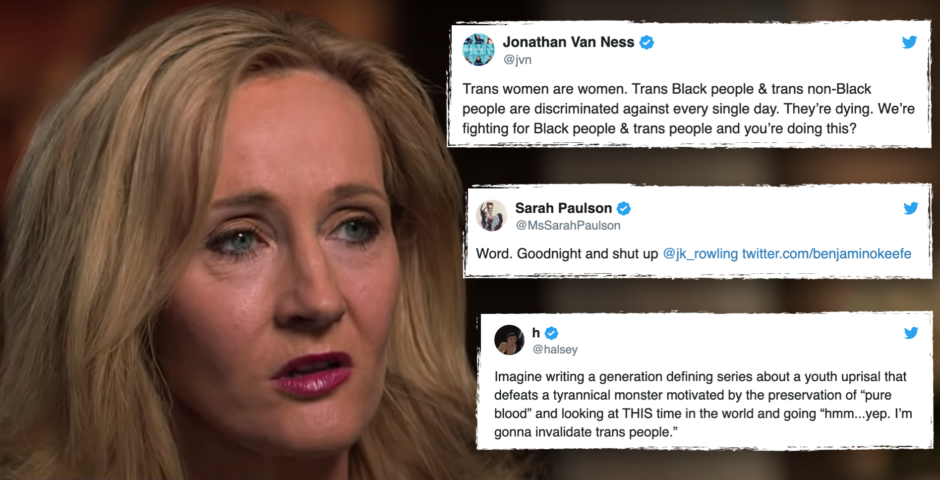 Cast your mind back to a blissful time when we could just enjoy Harry Potter without having any drivel being shoved into our faces by JK Rowling. Like really, why did she have to ruin such happy memories for the lot of us? Whether it was endless, unnecessary alterations to various characters from the series, or her vocalism about various topics that made her seem generally ill-informed and ignorant, it’s as if she has done her best to mar the late and great children’s book and film series.

‘People who menstruate.’ I’m sure there used to be a word for those people. Someone help me out. Wumben? Wimpund? Woomud?

Her latest blunder, unfortunately, sticks with the trend. It all started with a questionable tweet which seemed to be delegitimising trans people by claiming that they cannot menstruate. Regardless of your feelings towards transgender rights, this is not only factually incorrect by the modern understanding of gender but extremely inflammatory amidst the current protesting – it’s almost as if she has a new book coming out that she needs to claw back some relevance for! Unsurprisingly, many people have accused her of transphobia, so here’s a pick of celebrities who have reacted to her latest musings:

JVN again proves that he’s the kind of empowering figure that is needed in our current celebrity climate, questioning Rowling over the fact that she’s trying to start a debate at a time like this. Whether it’s the BLM movement or trans rights, he writes that they are being “discriminated every single day”.

It really doesn’t appear to be the right time, especially with the current protests over the killing of George Floyd, to be igniting a debate over the rights of members of a community that you’re not properly involved with – “We’re fighting for black people and trans people and you’re doing this?”

Imagine writing a generation defining series about a youth uprisal that defeats a tyrannical monster motivated by the preservation of “pure blood” and looking at THIS time in the world and going “hmm…yep. I’m gonna invalidate trans people.”

Halsey definitely had one of the more poignant points, arguing that JK Rowling went against the very morals that were essential to the plot and storyline of Harry Potter with her views.

She wrote: “Imagine writing a generation-defining series about a youth uprisal that defeats a tyrannical monster motivated by the preservation of ‘pure blood’ and looking at THIS time in the world and going ‘hmm…yep. I’m gonna invalidate trans people.'”

Did she- she she really cancelled j k rowling without even talking about her?
That's such a Ravenclaw thing to do! Cho Chang would be proud!!

Although somewhat indirectly, Katie Leung referenced her character, Cho Chang, in a Twitter thread that many are presuming is a thinly veiled criticism of JK Rowling’s comments on the rights of trans people.

The thread includes multiple links to funds and petitions to be signed to help in the current crisis, and it’s clear from her social media feed that the BLM movement is something very important to her.

In all seriousness, Daniel Radcliffe is saving lives with this statement. As a trans person, I used movies and books as an escape from my life and Harry Potter was one of those spaces I found refuge in.

From one Harry to another… thank you. pic.twitter.com/6tU3XsjQPb

He writes that he doesn’t want to painted as an enemy of JK Rowling and acknowledges that she has afforded him the course that his life has taken, but says that he is compelled to make a statement. He goes on to say: “Transgender women are women. Any statement to the contrary erases the identity and dignity of transgender people and goes against all advice given by professional health care associations who have far more expertise on this subject matter than either Jo or I.

Although initially defending JK, old Wossy then decided to go back on his claims. His original tweet, published on June 7th, shows that he clearly believed that she had a point, as evident by saying “For those accusing her of transphobia, please read what she wrote. She clearly is not.”

I just ate too many brownies. Again. Oh, and also. @jk_rowling is both right and magnificent.For those accusing her of transphobia, please read what she wrote. She clearly is not.

Obviously this was not received very well, and since then has spoken with his daughters, who have done their best to educate him on this topic. He acknowledges that he isn’t “in a position to decide what is or isn’t considered transphobic”, a criticism that has often been made of Rowling:

Those who know me will concede I try to be thoughtful & not a dick.Having talked to some people(OK,my daughters)re my earlier tweet,I’ve come to accept that I’m not in a position to decide what is or isn’t considered transphobic. It’s a wildly sensitive subject.Let’s keep talking

Hey JK as you claim to support trans rights and this is a historical moment where we are globally discussing the impact of white supremacy on Black People, please share some of your $650million mega wealth with this charity. https://t.co/3WoGduRuSE

Although Jameela herself has said some… unsatisfactory things herself in her time as a public figure, she emplored JK to share some of her huge wealth with some BLM funds seeing as she claims to be an ally of the trans movement.

She tweeted on June 7th: “Hey JK as you claim to support trans rights and this is a historical moment where we are globally discussing the impact of white supremacy on Black People, please share some of your $650million mega wealth with this charity.”

Star of American Horror Story and prominent LGBTQ spokesperson Sarah Paulson was next to oppose JK, taking a much more straight-cut approach by simply telling her to “shut up” – fair enough.

Another less direct to Rowling response, but still a visual display of allyship – Antoni from Queer Eye showed his support for Daniel Radcliffe and The Trevor Project by sharing Radcliffe’s statement.

“This needs to be said and I’m happy it was via The Trevor Project.”

JK has since responded to claims of transphobia on Twitter, saying: “I respect every trans person’s right to live any way that feels authentic and comfortable to them. I’d march with you if you were discriminated against on the basis of being trans. At the same time, my life has been shaped by being female. I do not believe it’s hateful to say so.”

• A brief history of every bad take J.K. Rowling has had on trans issues

• Why does JK Rowling think we care about her tweets?