People are posting black squares on social media with #BlackOutTuesday

The hashtag #BlackOutTuesday is everywhere on Twitter and Instagram today. If you haven’t noticed the hashtag, you may have noticed your Instagram feed is full of people posting black squares with the same caption. The trend is quickly taking over social media and you might be asking yourself – what does this hashtag mean and where has it come from?

Blackout Tuesday is meant to be a day of social media silence. By posting a black square, people are offering their solidarity with the Black Lives Matter movement and commemorating the death of George Floyd. However, the trend goes deeper than simply a post on Instagram. Here’s everything you need to know about Blackout Tuesday and how you can get involved:

What is Blackout Tuesday?

Blackout Tuesday started in the music industry under the hashtag #THESHOWMUSTBEPAUSED after a number of leading names chose to show their respects to the Black Lives Matter movement by not posting on social media or releasing any new content for a day. During this break away from work, they would focus on “reconnect[ing] with our community”.

The movement has spread across all social media platforms, most prominently with users posting a picture of a back square, with the new hashtag #BlackOutTuesday. The posts are meant to act as a symbol of solidarity to the Black Lives Matter movement and a promise to refrain from posting. In this day of “silence”, people are meant to use their time to show support in other ways, such as donating, protesting, signing petitions and educating themselves and their friends and family. On top of this, by allowing their feeds to go quiet, they offer more opportunity for posts from people of colour to be seen. The trend is meant to encourage white people to focus on resharing and supporting POC and black content creators, rather than posting their own content.

Why are some people unhappy with the trend?

The trend has received some criticism from people, including celebs like Lil Nas X, for being counterproductive. Whilst the movement is meant to create a space for black creators to be heard, newsfeeds are instead being flooded with black squares. Important information and content is, therefore, potentially being lost among the overload of #BlackOutTuesday posts. 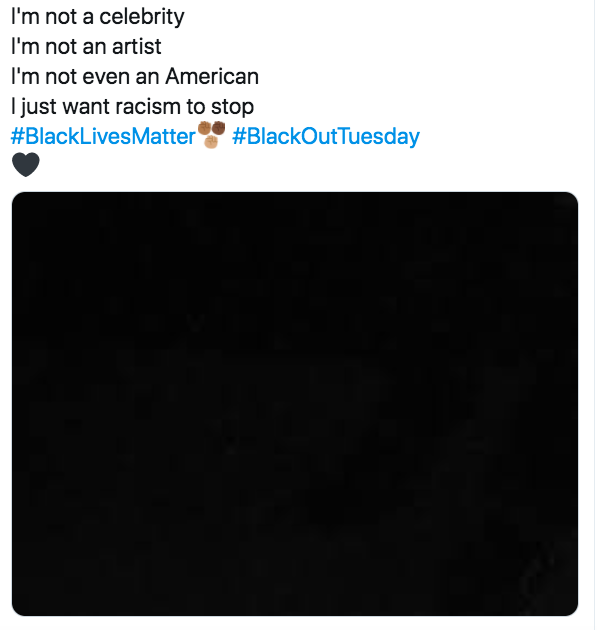 How do I get involved in the Blackout Tuesday movement?

To post a picture, you can either screenshot and crop someone else’s black square or put your phone camera against a flat surface and take a picture. Then make sure you use the correct hashtag #BlackOutTuesday or the same, all lowercase.

Finally and most importantly, after the post, do the work. Support black and POC content creators, read their posts and follow any helpful links they provide. Do your own research – listen to podcasts on racism and white supremacy, and read books, essays and articles on the topic. If you can afford to donate then do, and make sure you sign petitions. Start conversations with your friends and family, and encourage them to educate themselves. The importance of the trend goes wasted if you don’t follow through beyond the post.

• ‘Silence is compliance’: How you can speak out against systematic racism

• The British school system raised us to think the UK isn’t racist. Well, it is