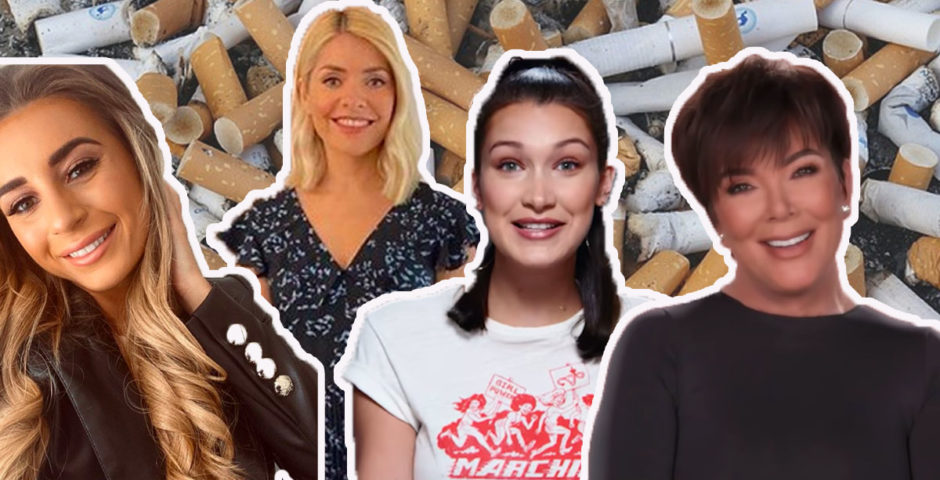 These are all the celebs you didn’t realise smoked

Even if you’re not an actual smoker, nearly all of us have had one or two in the smoking area at 2am when those tequila shots have started to kick in. And celebs are no different. For some of them it just fits their vibe to a tee. Like you couldn’t image Robert Pattinson or Miley Cyrus not having a cigarette in hand when walking down the street.

But for some celebrities the idea that they smoke is just weird. Kris Jenner smoking? I was stunned to say the least. It’s just not the momager look. And for some celebs whose entire brand is based off wellness it’s pretty shocking to see them light up, I’m talking about you Gwyneth Paltrow. Or it doesn’t fit their wholesome mum vibe like Holly Willoughby and it’s kept pretty much under wraps.

These are the celebrities you had no idea once smoked or still do:

Yes the nation’s sweetheart has been known to love a ciggie from time to time. Holly Willoughby has been pictured smoking at a festival and at lunch with MiC’s Francis Boulle. Weird crossover, I know.

It’s not known whether Holly regularly smokes or if she just enjoys the occasional cigarette with prosecco and Made In Chelsea stars.

The supermodel has been pictured smoking a few times including once at Coachella but it’s not know if Rosie still smokes.

Wellness guru and smoker? The two don’t usually go together. Gwyneth used to smoke a lot when she was younger, I’m talking two packs a day, but has now quit and said she only smokes once a week on a Saturday night.

@KrisJenner smoking a cig is a MOOD pic.twitter.com/pKW6YqLGJI

Lol, I just love the idea of Kris Jenner smoking. Kris was pictured by Kourtney and Kim at Kourtney’s 39th birthday party in 2018 smoking. In a recent episode of Keeping Up With The Kardashians Kris smoked a cigarette whilst on a wine tour in Napa Valley.

It’s unknown if this a regular habit for Kris or just something she does after a few glasses of wine, in which case I feel you Kris.

Bella Hadid smoking is even a concept pic.twitter.com/5wuqnMCYm1

Whilst some models just pose with cigarettes Bella Hadid has been photographed many times smoking. In 2017 she said she’d quit smoking and moved onto vaping, which last year she said she wanted to quit.

Sofia Richie and Scott Disick spotted smoking at a club in Miami pic.twitter.com/A4nmPWVcXD

Sofia has been photographed a number of times smoking, especially when she’s with Scott Disick.

Emma, or Poppy Moore as she will forever be known in my heart, appears to have a pretty regular smoking habit. She’s been pictured smoking a number of times and was last photographed with a cigarette in August last year.

Elsa Hosk, aka incredibly fit Victoria’s Secret model, had a well documented smoking habit. However in 2019 she revealed she quit smoking in 2017 but still vapes and hopes to give that up in time.

Everyone’s Love Island favourite Dani has been pictured smoking on numerous occasions, including one time with her dad last year. When the photos of Dani smoking came out a lot of people on Twitter were pissed off and felt disappointed by her habit. Yikes.

I’m so disappointed to learn that @Dani_MasDyer and @jack_charlesf smoke. I feel like I’ve been lied to. #lovelsland #smokingkills #notcool

•A serious investigation into which Love Islanders smoke

•How to smoke in your uni room without getting caught

•Which is the undisputed best club smoking area in the entire country?