He owned six luxury properties across the world

Netflix has just released its newest documentary, called Jeffrey Epstein: Filthy Rich. The four-part series includes powerful interviews from survivors of Jeffrey Epstein. But one thing people are questioning whilst watching the documentary, is how Jeffrey Epstein accumulated so much wealth and what happened to all of his houses after his death?

Jeffrey Epstein had a huge, multimillion dollar real estate portfolio all across the world. To the public’s knowledge, he owned six luxury properties. These were: a multimillion-dollar mansion in Manhattan, two private islands in the US Virgin Islands, a home in Palm Beach, Florida, a ranch in New Mexico and an apartment in Paris, France.

Here’s all about the houses Jeffrey Epstein owned, and what happened to them after he died.

Epstein owned a mansion in Manhattan which was worth $77 million. The address is 9 East 71st Street, New York. This mansion is reportedly where some of Epstein’s crimes took place. The house is seven stories and has been described as looking more like a museum than a home. 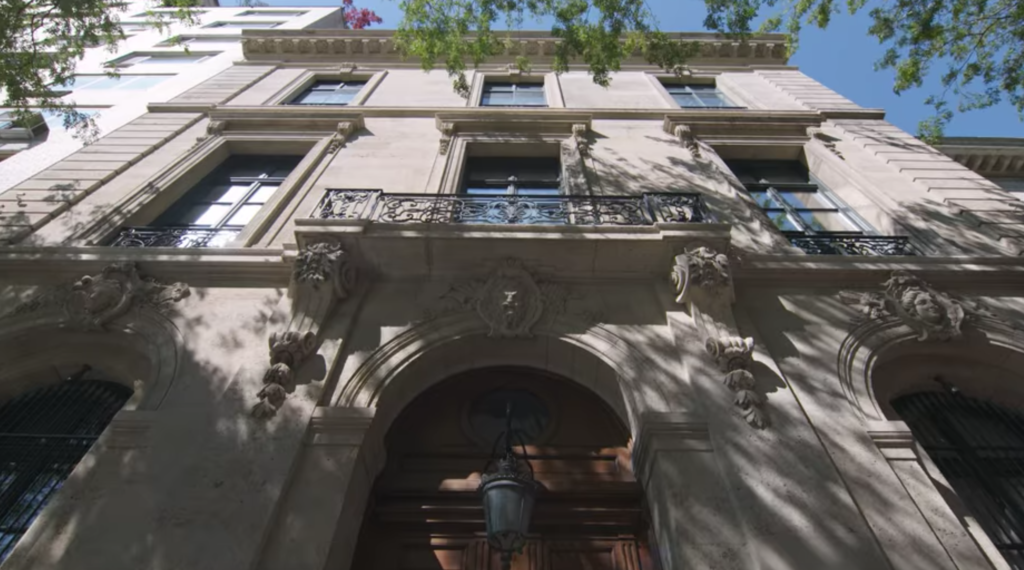 It’s been reported that the mansion was given to Epstein from his billionaire client, the CEO of L-Brands, Les Wexner, in 1996 for $0. It’s never been explained why he gifted Epstein the house. 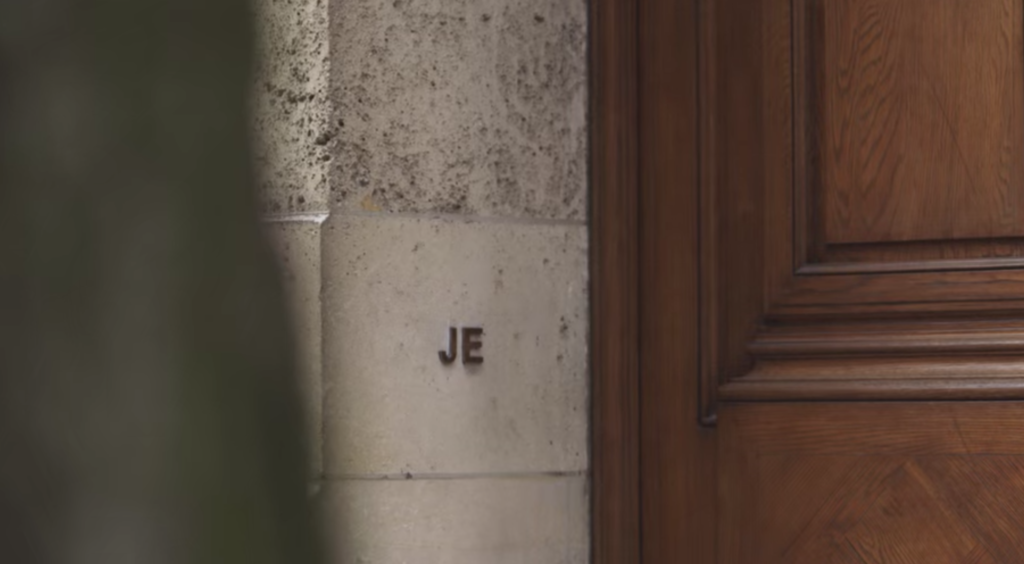 The door had Epstein’s initials by it, via Netflix

According to Town and Country: “Guests describe chairs upholstered in leopard print, a twice life-sized sculpture of a naked African warrior, and a framed picture of a woman holding an opium pipe and caressing a lion skin.” The 40-room house is also said to have a massive mural of a prison yard, a massage table with sex toys and lubricant, a room covered in leather, and a stuffed black poodle perched on a grand piano.

The house was raided by the FBI on July 8th 2019. It’s been reported that the house will be put back on the market. 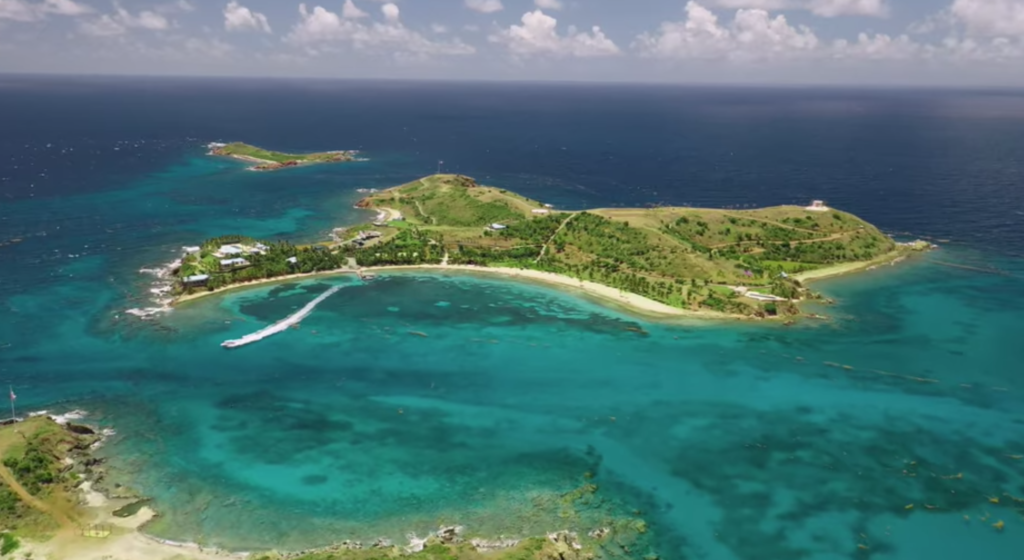 Jeffrey Epstein owned Little Saint James, a 70-acre island in the U.S. Virgin Islands. It became known locally as “paedophile island” because of the crimes Epstein is said to have committed there. It’s said to have been his primary residence. In the show it is described as “one of his favourite places to go because it was so isolated”. 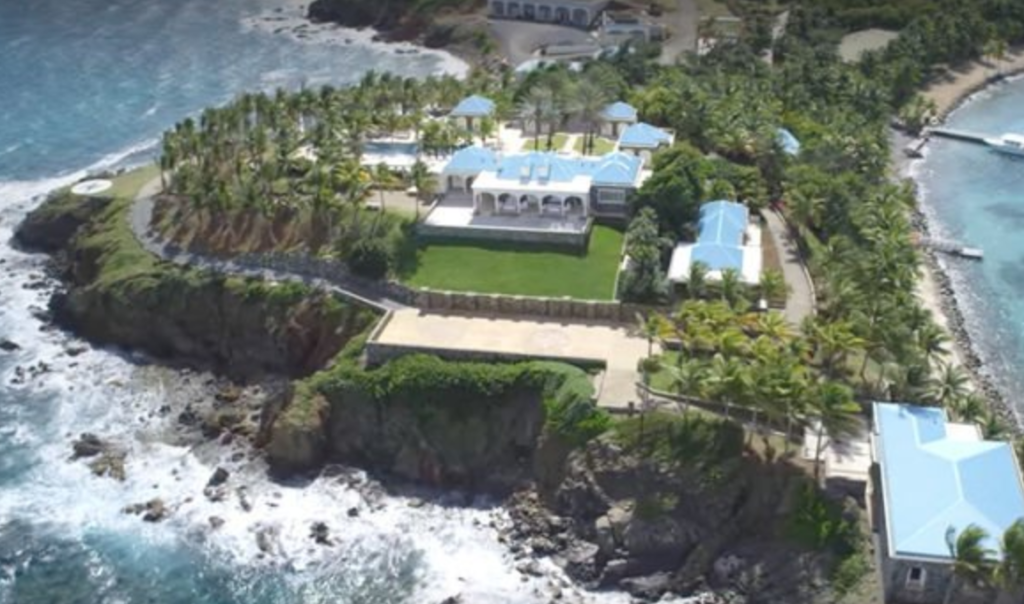 According to Bloomberg, Epstein dubbed it “Little Saint Jeff’s” and tourists still take boats out to catch a glimpse of the private island.  It’s reported Epstein bought the island for $7.95 million in 1998 before carving out roads and building several villas. He also built a helipad, cinema, bathhouse and library there. 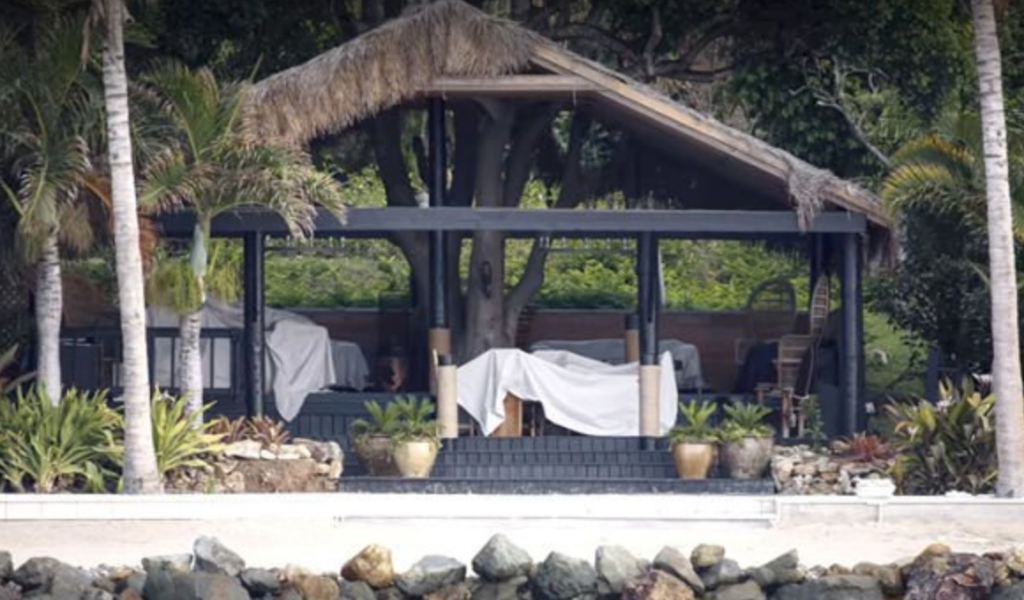 The island sits just off the coast of St Thomas, just between St Thomas and St John – two of the largest islands of the US Virgin Islands in the Caribbean. To date, it is still listed as being owned by Jeffrey Epstein. 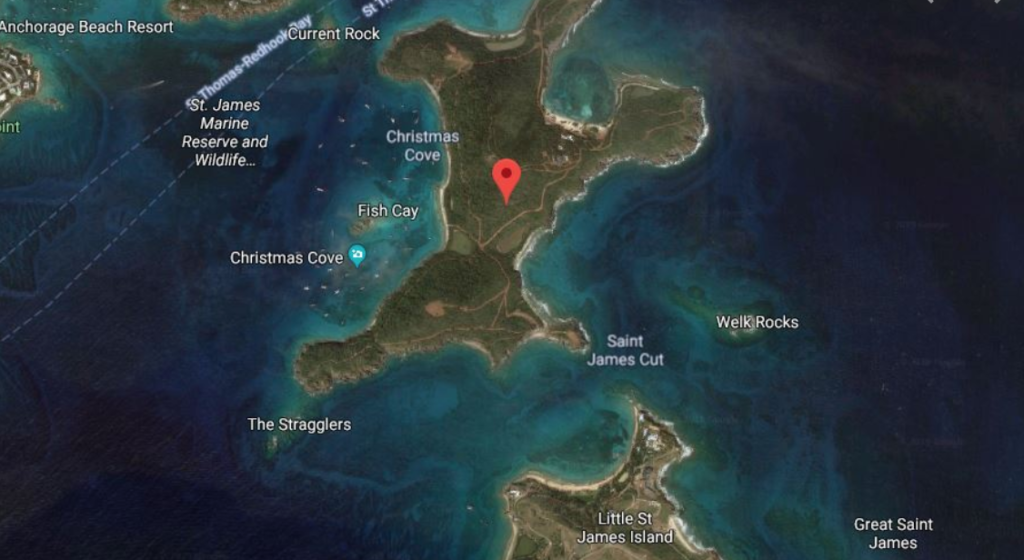 In 2016, Epstein bought another 165-acre island, Great St. James, for $18 million. This bought his two purchases of private US Virgin Islands to around $26 million. Great Saint James was the larger of his two islands.

According to New York Magazine, Epstein had planned to build a compound on Great St. James but was issued a stop-work order for not obeying environmental regulations. He allegedly ignored this and carried on construction. 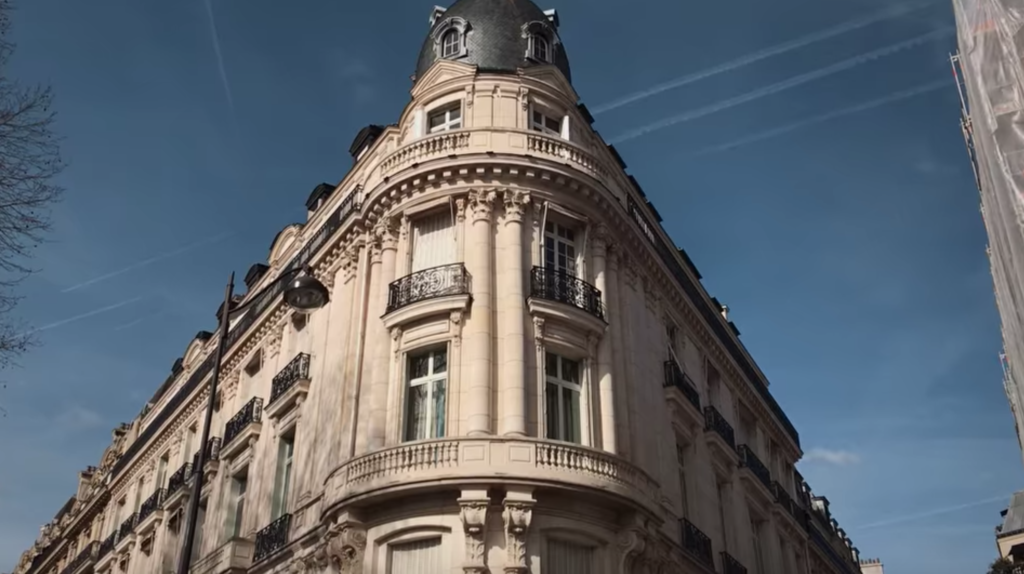 Another of the houses belonging to Jeffrey Epstein was an apartment in Paris, France. Not much is known about the flat, but according to Curbed, the apartment Epstein owned is on the famous Avenue Foch. Avenue Foch is the widest avenue in Paris and is lined with chestnut trees along its full length.

As the exact location of this property is not known, it is also not publicly known who owns the apartment now or if it lies empty.

In 1993, Epstein purchased the Zorro Ranch in New Mexico from the former New Mexico governor Bruce King. It’s reportedly the biggest ranch in the state, boasting 7,500 acres. Epstein built a nearly 27,000 square foot mansion, which was reportedly valued at $18 million.

The house he built there was twice the size of the second biggest property in the county. He told Vanity Fair: “It makes the town house [in Manhattan] look like a shack.” As well as the house he had an airplane hangar and landing strip on the land.

After Epstein died, it was reported that New Mexico officials wanted to take back the land he owned.

His home in Florida 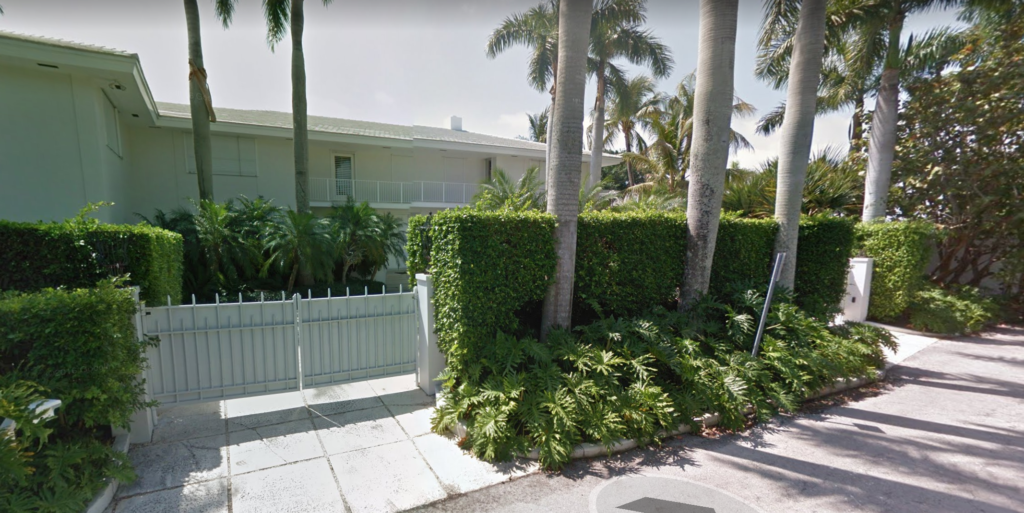 In 1990, Epstein paid $2.5 million for a waterfront estate in Palm Beach, Florida. The house is on El Brillo Way and is now estimated to be worth around $12 million.

Lots of the testimonies from survivors in the Netflix documentary series are about their time in Palm Beach, where they met Jeffrey Epstein and worked for him. 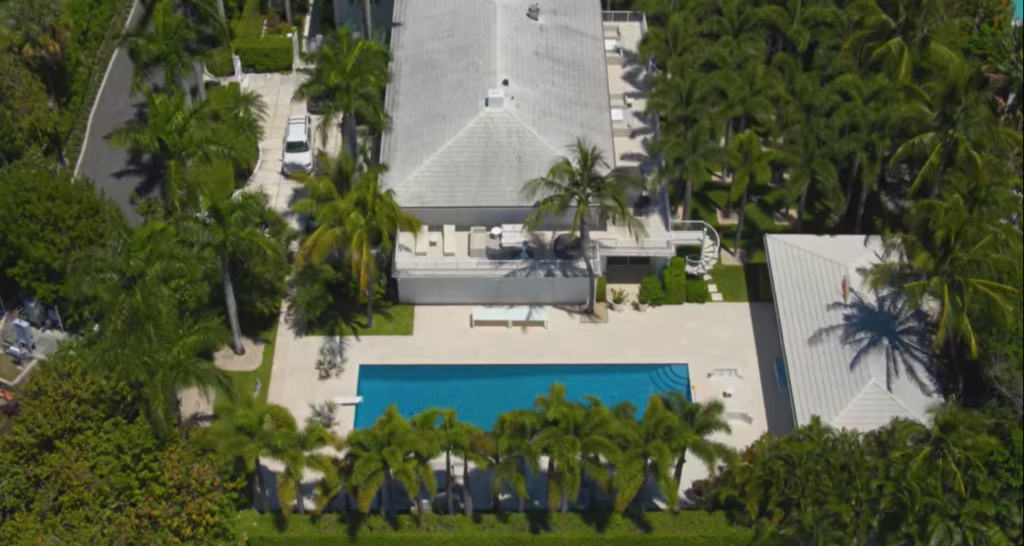 It has not yet been reported if the house has been sold on by his estate owners now, so it’s assumed they still own the property.