And then we moved in together for a week

Over a month ago, I wrote a guide on how to find a quarantine boyfriend and maintain him throughout lockdown. It was a bit of a joke, and the quarantine boyfriend wasn’t supposed to be like – a real boyfriend. You water him like a plant and get attention back as a result. You do it for fun and then probably call things off when lockdown eases and life gets more interesting. A big joke, right! Except we’re one month on and I have a boyfriend that, up until a week ago, I had never met.

Aside from the sense of pride I have that the tips in this article somehow actually landed me a boyfriend (don’t try this at home, side affects include intense yearning and chronically debilitating horniness), I’m still pretty stunned. I met him for the first time a week ago, on Monday, and we lived together for a full seven days despite never meeting in person before. That’s intense. You know what’s more intense? Becoming official with someone OVER THE INTERNET who you’ve never met. You read that right. We were boyfriend and girlfriend before we even met face to face. I had an internet boyfriend like a fucking weeb, for a full month.

Anyone who knows me I am opposed to the idea of doing pretty much anything couple-y before having sex with someone. Sex is a test of compatibility. If you boil it down, so is kissing. So is, I don’t know, actually looking at their face and speaking to them in person. But something about this boy had me spun and somewhere between the country going into lockdown and me falling in love (is that a Kanye song?) we became official. So from me, to you, here’s how that all went down. Starting with the dating app match and ending with seven days of us living together. Did it all work out? Guess you’ll have to read on to see.

We matched on Hinge

Approximately two days after I wrote the quarantine boyfriend story, I checked my likes on Hinge to see that some fit guy had liked my prompt about obscure Simpsons references (my main criteria for a boyfriend is that he is equally as devoted to old The Simpsons episodes as I am, this Hinge prompt is a way of gatekeeping, I don’t respond to anyone who doesn’t interact with that prompt). He had passed the first test (Simpsons test), so I messaged him about his job that he had listed on his profile and mentioned his love for The Simpsons in my first message. He responded with “I sleep in a racing car bed, do you?”. Safe to say I had no chance. Already in love. I’m done. He’s won the game. Out for the count. Ladies, call the florists, the wedding is in June! 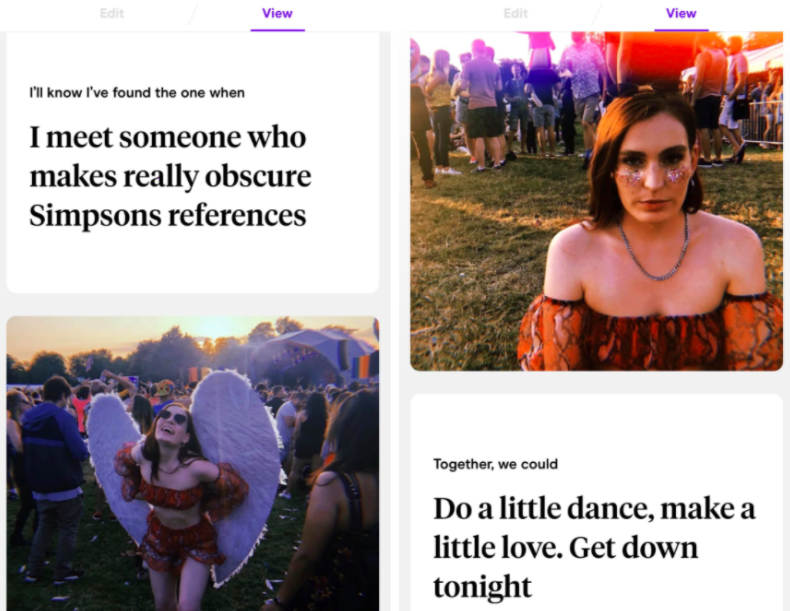 The Hinge prompt in question

Anyway, this devolved into actual conversation and we spoke for three days straight. Like, constantly. The kind of talking that makes your parents annoyed because you’re on the your phone that much, and your cousins make comments like “Maddy’s smiling at her phone again!” Yes it’s all very lame, I know. And this is just the beginning.

We eventually discussed what we’re looking for at the moment (relationship-wise) and set the record straight that we felt super into each other. And on the third day, God invented sexting. Sexting him for the first time for some reason was entirely nerve-wracking, despite counting myself as an expert sexter. I legit felt like my heart was going to beat out of my chest and also that my vagina might never recover from the… uh… look I’m going to have to say fanny flutters at one point right, so I’m saying it now. I’m sorry. I can’t take it back. It’s been said.

We called, and voice noted, and… did other stuff

Eventually we realised we’d have to stop messaging feverishly like 14-year-olds who were glued to their phones and actually hear each others’ voices. For some reason the idea of a phone call was really scary at first (I’m not a pussy I swear I just really like this guy!) and so we sent voice notes instead so we could hear each other for the first time. This was also partially so I could pre-hear him and not hear him for the first time live, if that makes sense, and accidentally say “christ that’s an ugly voice” on the phone to him. It was not an ugly voice, luckily. It was such a fit voice that I sent a clip of it to my mates and they responded like this: 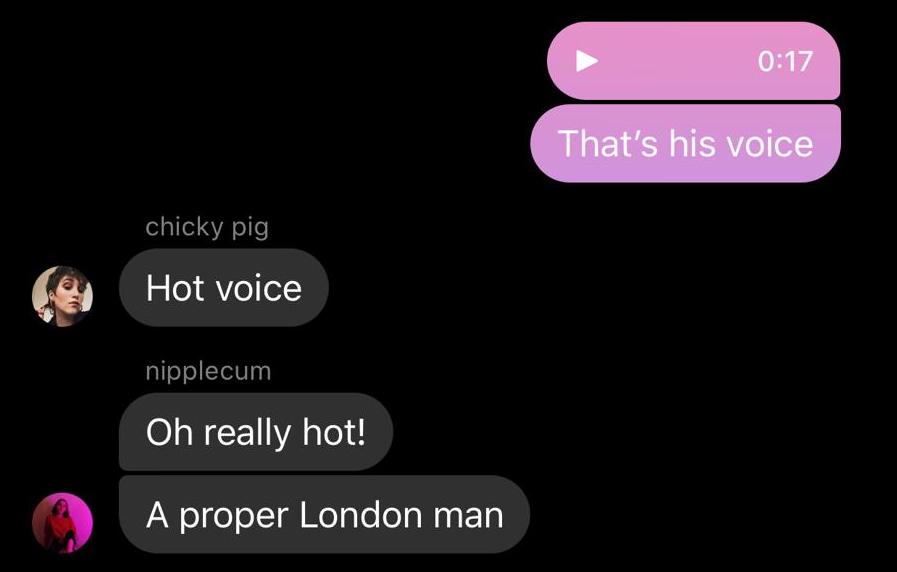 Eventually we called and it went well, we talked for nearly two hours on the first call and got on really naturally – we made eachother laugh a lot, so that was a weight off. Because it went well, we started calling all the time, a couple nights a week for hours at a time. I feel very sorry for my family who I was locked down with, because boy – not all of those 1am convos were PG. Oh well! All in the name of love.

However, the one thing we didn’t do was Facetime. There were no Facetime dates, no video calls. This obviously lead to a lot of catfish jokes near the end, but we kinda resolved to wait to see each others’ faces in person. It would be strange to not Facetime for so long and then suddenly start, and I think both of us kinda wanted the reveal. So we waited.

Then we became official

This is ridiculous I know. I want to make it clear that neither I nor The Boy are certified weirdos, we’re normal people who have had relationships before and we definitely don’t write fanfiction and spend hours on Tumblr. I mean, I did that when I was 15 but I’ve moved on. What I’m saying is, we’re not the type of people to end up in internet relationships, on account of it being entirely stupid and sounding very 90-Day-Fiancée.

But lockdown life is different, so we did. I’m not sure when, I think it was after an argument about when we’d eventually see each other (these became difficult to avoid, having an internet boyfriend who you can’t actually meet is very taxing). But we both confessed that we felt like that’s what we were to each other, boyfriend and girlfriend, and so that’s what we became. Did I hold my phone to my chest and squeal when it happened? No haha what the fuck that’s so lame. Haha. Ha. Moving on.

The wait to meet him felt like it lasted FOREVER

Don’t worry I’m almost there. But I’m making you read all this because it was nearly two months I had to live through, and it honestly felt like a lifetime. We knew everything about each other, or at least it felt like it, and we were desperate to finally meet. Largely because I was scared I’d devoted months to someone who might not even make me come, or that I was about to land a prime spot on Catfish UK: Lockdown Edition, and I’m sure he was feeling the same. We spent at least an hour of every conversation starting sentences with “I can’t wait until we can…” with varying different endings, from the dirty to the obscenely soppy. Honestly at this point I would have paid a straight grand just to have him pat me on the shoulder. That’s how intense it was.

My WiFi went down in the house I was quarantining in and I had to return to London, where The Boy lives. Lockdown had been eased and there was no risk of infecting anyone (he would drive from where he lived to me, no one else would be involved or put at risk, at least it wasn’t 260 miles to Durham) so we planned to meet the day after I got back.

The day arrived, my whole body was shaved, exfoliated and moisturised and I thought I might vomit in my mouth. And outside of my mouth, into the toilet. I managed to hold it together and opened the door to him. We kissed. We freaked out. We drank a lot of wine. We had sex. It was amazing. 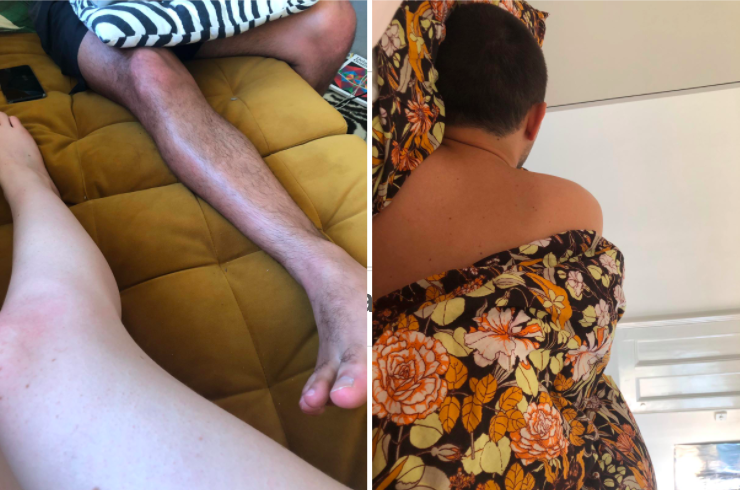 Literally the only photographic evidence I have of that whole week. Naturally pic two is now my lockscreen

The rest of the seven days went kinda like this: Sex. Deliveroo. Watching The Simpsons episodes. Cigarettes on balcony. Beers on balcony. Beers in park. Doing some work. Sex. More Deliveroo. Him cooking for me and complaining that I eat like a child (I do). Me complaining about him complaining about politics. One brief moment where we both cried. Sex. Saying ‘I love you’. Eating more Deliveroo. It is up there as one of the best weeks of my life, and yes, everything worked out.

So we’re still together, he’s gone back to his now and we’ll see each other again as soon as it’s safe and legal. I, nor he (I think, I hope) regret anything we did, including becoming official with someone we’d never met. It’s truly been the weirdest two months of my life, but I’m happy, healthy, in love with my internet boyfriend and have been well and truly dicked down within an inch of my life. On one of the last days, we sat on my sofa together and both pressed down on the Hinge icons on our home screens until they were shaking and deleted them at the same time. Now that is modern romance.

Related stories recommended by special internet dating and Hinge correspondent who took it too far, me:

• If the boy you’re texting in quarantine is showing any of these red flags, call it off