Or, how many students at your uni won’t be putting their grade on their CV?

Thirds can be a good thing – a third of a million pounds, or a third property in the Bahamas, say. Not so if we’re talking about degrees.

Of course, a uni giving out a high percentage of thirds isn’t a bad thing in and of itself. It might indicate that the university takes students from a wider range of backgrounds, who are more likely to face disruptions to their studies. Or it could indicate a focus on academic rigour.

Really though, if you want to play the averages to ensure you’ll come away with something above a third, this table might be useful.

Of all the Russell Group unis, Liverpool hand out the most thirds, with three per cent of degrees awarded as the lowest classification. By contrast, boffins at Imperial award a measly 0.56 per cent of degrees as thirds. Not accounting for how hard you try, this means you’re around six times more likely to get a third at Liverpool.

How many students at your uni get a third? Check out the table below: 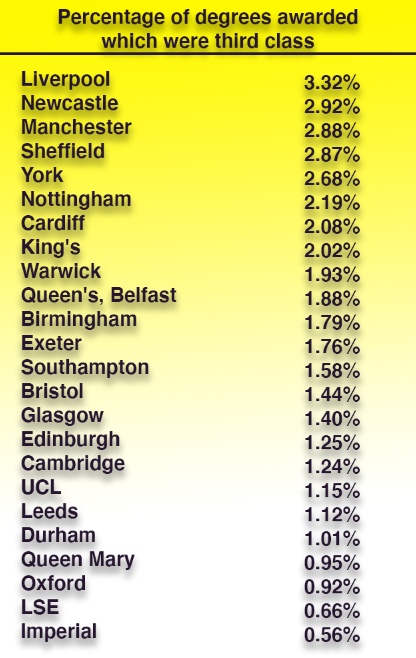 • Gather round: These are the most well-endowed unis in the country