This ‘which classic Simpsons episode is your uni?’ article is perfectly cromulent

Look we all need an escape. So buckle up for a nice game of: Which classic Simpsons episode is your uni?

This is classic Simpsons. Forget Jerk Homer, forget the day the Simpsons died. We’re no fans of reductive stereotypes, where complex things are condensed into single traits.

Anyway, if your uni was a classic Simpsons episode, this is what it would be. It’s the best of content, it’s the blurst of content. 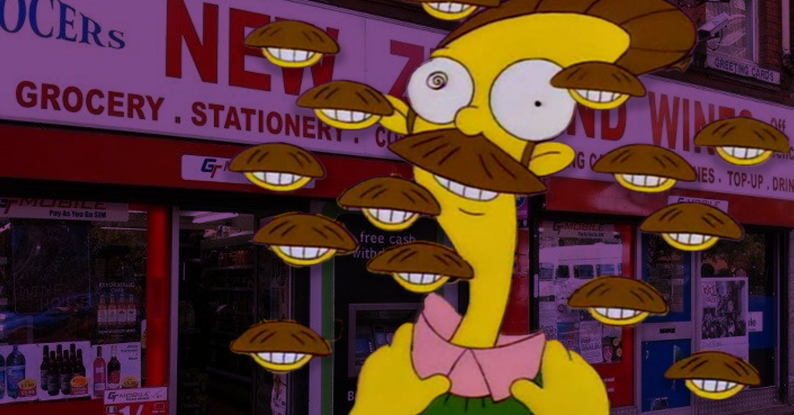 Not much to process here, just that Manchester students are the druggiest going. You ate the Guatemalan insanity pepper on the first day of Freshers’ and things haven’t been the same since.

The Last Temptation of Homer – Warwick

In the Last Temptation of Homer, the yellow patriarch journeys to another city and is almost drawn into a night of passion with Mindy Simmonds. This could only be Warwick – where students make the pilgrimage to a far-off land (Leam) for a night out, and are tempted to never come back.

The Stonecutters. The No Homers club. The Pitt Club. This Simpsons episode is the only thing to hold a candle to Cambridge’s love of secret societies.

Whereas members of the Stonecutters have their social worth determined by a weird system of numbering, at Cambridge it’s a much simpler system of which boarding school you went to. 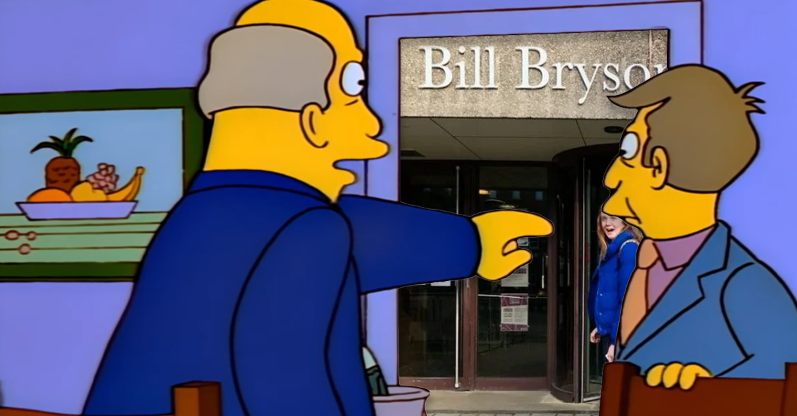 Okay, so Durham only has 16 colleges, but that’s still too many. Durham students will attempt to pass off their degree as gourmet Oxbridge steamed hams, desperate to impress Super Accountant Chalmers of PwC, but he can see through it. At Durham, as with the episode, things generally end with the geeky guy trying to get the last word in conversation.

“LISA NEEDS BRACES! DENTAL PLAN!” could easily be a chant ringing out from protestors as they bear down on the Wills Memorial building. When you ask any half-addled Bristol grad about their time at uni, they’ll tell you “it was the best of time, it was the blurst of times”. Every Bristol student goes through Homer’s journey in this episode, constantly flitting between strikes and the weird seduction of power. And yes, they’ve all tried to tie an onion to their belt. 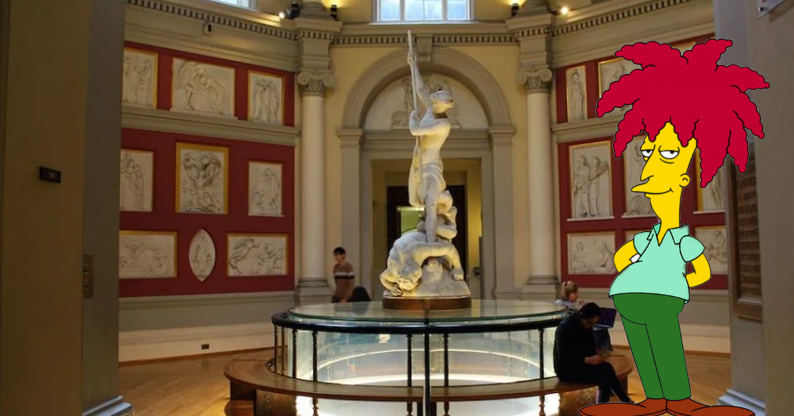 When Sideshow Bob becomes mayor of Springfield, he wreaks the exact kind of havoc you’d cause if you’d become president of the UCL finance society. Pettily obsessing over a single enemy, determined to thwart their ambitions.

“I’m seeing double, four Krusty’s” is the standout line in this caper, where Homer trains to become a clown. Except, in Newcastle your eyes do not deceive you – there really are four shots in that drink!

With all the Fiat 500s dotting the Jesmond streets, you’d be forgiven for thinking they were clown cars to take the students to clown college.

Sorry, again, the joke here is really route one. But it’s safe to say Sussex students roam around the boutiques on the lanes in the vague hope Paul McCartney – or at least Nick Cave – is going to be there.

A Star Is Burns – Nottingham

As the Springfield film festival discovers, you can produce all the deep and meaningful content in the world, but sometimes people just want to laugh at a man getting hit in the groin by a football. This is Nottingham – it should be a respectable uni, but instead everyone gives in to their most base instincts. If there’s a modern version of “Man Getting Hit by Football”, it’s footage of pissed Notts students yeeting VK bottles off nightclub balconies.

Who Shot Mr Burns Part I – half of KCL’s campuses

Just like the first part of the Simpsons’ classic whodunnit, a KCL degree ends on a cliffhanger. Instead of wondering who murdered the wealthy, amoral industrialist, you wonder whether you’ve got what it takes to become one.

This is the Simpsons’ only ever two-parter, and so it’s only right we match it with a uni with umpteen campuses. Of course, the real mystery isn’t the identity of Mr Burns’ would-be assassin, but why anybody would go to uni in London.

Lisa discovers that Jebediah Springfield, her town’s founding father, has a dark and murky past. Were Lisa an Oxford student when this happened, the tabloids would have been frothing. “Lisa the Snowflake” accused of ignoring uncomfortable history. And of course, Oxford would be just as reluctant to remove the statue as Springfield.

Also “A Noble Spirit Embiggens The Smallest Man” is probably the motto of at least three Oxford colleges.

A ripped, shirtless boy, probably religious, yelling “STELLA” at the top of his voice? Yep, you’re in Exeter.

You know how it is. Plow King/Uni Of is just more successful, and any attempts to overcome that end in embarrassment for you.

Bart’s stuck in his room with a broken leg all summer, you’re stuck in Norwich for three years. Who’s got it worse?

Yes, Selma gets married to Troy McClure in this episode. But as with Sheffield, all anybody talks about is this song. Whilst this episode’s star is a few apes in the sand, Sheffield’s is the Arctic Monkeys. Dr Zaius, Dr Zaius.

Homer eats something weird, thinks he’s going to die, and so acts as though it’s his last day on earth. Falling asleep with his headphones in as the sun comes up, Homer is shocked to wake up the next day. If you have been on a night out in Leeds, this is exactly how they act. Apocalyptic.

This episode is memorable for one thing: Sideshow Bob stepping on the rakes. Every direction he turns, he shudders at his bad luck. It’s just like being in Southampton. 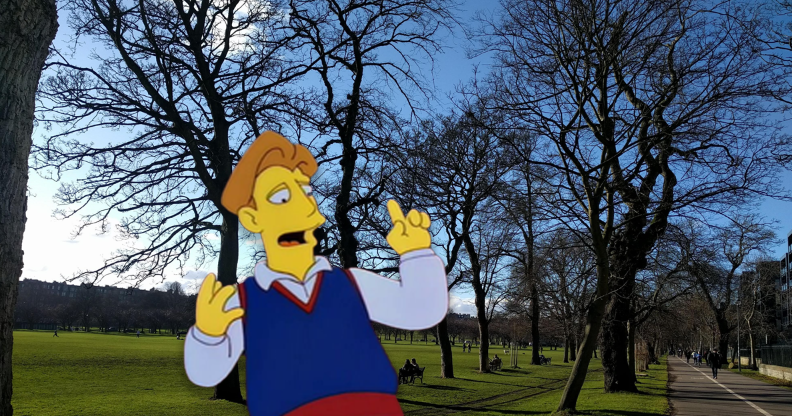 Lisa’s future British fiancee Hugh Parkman is all the boys from Fettes with floppy hair who’ve ended up at Edi.

Marge vs The Monorail – Lancaster

He’s sold monorails to Ogdenville, Brockway, North Haverbrook, so why not Springfield? We’ve got collegiate systems at Oxford, Cambridge, Durham, and York, and by gum that’s put them on the map.

You can only imagine that Lancaster’s decision to implement a college system was carried out with the same kind of giddy song as the residents of Springfield did when opting for a monorail. Of course, both are similarly disappointing in reality. 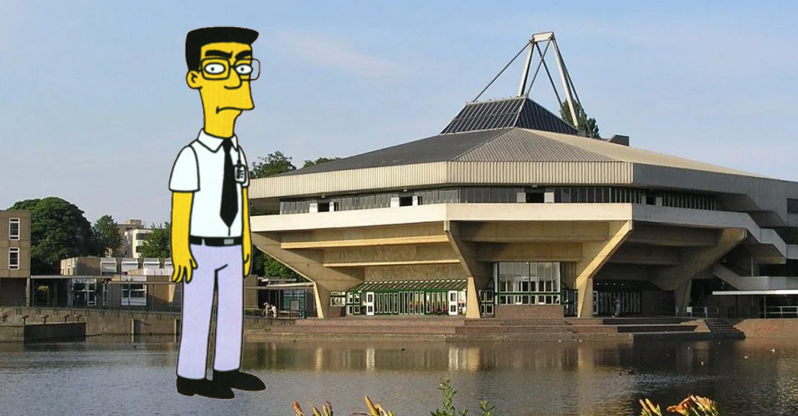 Frank Grimes becomes increasingly infuriated by Homer’s inadequacy. He simply can’t relate to the guy on a normal level. This is a classic York student – cursed with intelligence, but barely any chat. Of course, the ultimate, crazed decision Frank Grimes makes is nothing compared to the truly deranged move of choosing York on your UCAS.

You don’t know how you got there and it’s all gone wrong. All you can do now is twirl through the air eating crisps.

Birmingham students didn’t think their degree would end in the same way as ‘Round Springfield – staring at the clouds, imagining one last reunion with a dearly departed cultural icon. But here they are, daydreaming of getting that one last dissertation pic under Old Joe.

And Maggie Makes Three is one of the most moving classic Simpsons episodes. It delves deep to show us what keeps Homer going – Maggie. Which, coincidentally, is also what keeps the ardent Tories of St Andrews going.

If you were filming an A level student when they realised they’d be going to Liverpool, rather than Manchester or Leeds, you’d be able to pinpoint the second when their heart ripped in half.

When they send you to the London School of Economics, they reassure you it’s just a name. It’s not actually that nerdy However, while you’re getting chased down by the monster politicos of tomorrow, you turn to a friend in disbelief. How can this be?

What they mean, your friend says, is it’s actually the London School of Economics and Political Science.

You Only Move Twice – Imperial

If you’re reading this, you’re probably annoyed your uni hasn’t ended up as this – one of the Simpsons’ finest moments. It’s the same envy anybody studying science feels when they look at Imperial.

In You Only Move Twice, Homer ups sticks in the hope of striking rich at some fancy-pants science company. However, it turns out his boss is an evil megalomaniac. Imperial’s Vice Chancellor is not evil by any stretch of the imagination, but she is the highest paid in the country.

• This is where the Tracy Beaker characters would go to uni