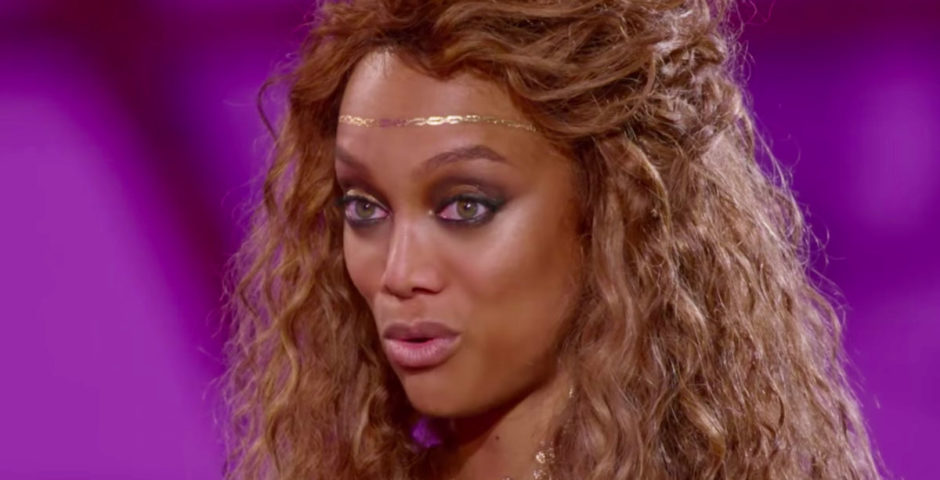 Between the ages of eight to 12 America’s Next Top Model was my life. Nigel, Jay, Tyra, J. Alexander and freaking Twiggy and André Leon Talley. I was obsessed with them. Learning to smize, the weirdly themed shoots, wanting to win a Cover Girl campaign and the makeover episodes. God they really were the standout episodes of every series – watching a girl have all her hair shaved off and then sent home two weeks later.

But throughout the 24 seasons, there have been a number of deeply offensive, damaging and racist moments. And a lot them have been said or allowed by the leader herself, Tyra. Like telling a contestant her gap teeth doesn’t make her marketable or having the girls pose in blackface. Seriously fucked up.

The modelling industry has come a long way since the show began in 2003. Gappy teeth are in fashion and any campaign dumb enough to do  blackface would be cancelled immediately.

These were the most messed up moments in America’s Next Top Model history:

In season six of America’s Next Top Model, Danielle Evans had a big gap between her two front teeth, which Tyra wanted to get rid of. When Danielle refused to have the surgery done, Tyra said she wouldn’t be marketable and couldn’t be a Cover Girl.

Danielle ended up winning that series.

Nah how did Tyra get away with this LOL pic.twitter.com/XrguUvgWFh

Who let this happen??

In season seven the girls went to Spain and were having dinner with the male models who they would be shooting with the next day. Jaeda’s male model says he doesn’t want to kiss her because she is black.

The next day Jaeda is visibly upset and uncomfortable and at elimination she told the judges the situation. Though they were sympathetic, they judges said she shouldn’t have allowed that to stop her from working.

In season four Kahlen got the devastating news that one of her closest friends had died. The next day the challenge was for the girls to take part in a shoot portraying the seven deadly sins in an eight foot deep grave.

Jay is very sympathetic with Kahlen before the shoot and supports her throughout. Kahlen agrees to do the shoot and ends up getting the best picture that week.

Yes she agreed to taking part in the shoot, but at no point is there any obvious offer from the production team to let her sit this one out.

When they did a photoshoot as other ethnicities

This challenge was all kinds of wrong. The models had to “Take on the persona of the other ethnicity” and they’re doing black face. Enough said.

They did another change “your race” challenge!!

In season 13, the models were sent to Hawaii and one of their shoots took place in a sugar cane field where they were meant to be celebrating mixed race heritage. Tyra was the photographer and got the girls in blackface and appropriated outfits including Native American headdress.

One of the most iconic contestants was removed from the show because she was once an escort??

Angelea Preston was on season 14 of America’s Next Top Model and then went onto appear in the all stars season a few years later. She reached the finale when she was suddenly disqualified for “breaking the rules” but viewers weren’t told what she had done. The finale had to be reshot, making everyone believe she had won the show.

Angelea then revealed she had won the show but the title was taken off her. She sued Tyra and America’s Next Top Model after they found out she had been an escort for a year and booted her off the show.

In this challenge the models had to take part in a shoot in a freezing cold pool. One of the contestants, Caridee, ended up getting hypothermia because she was so cold.

She was then criticised by Tyra and Jay for not speaking up sooner about how she was feeling. In fairness, yes she should have spoken up, but when you feel pressure to get the shot or not wanting to be seen as a diva it’s no wonder she didn’t say anything.

Yes you read that correctly. The girls were meant to be filming a fun commercial on Venice Beach where they end up kissing a guy. Most of them are a little nervous, but Kayla is extremely resistant to the whole idea.

She reveals to Jay she was sexually assaulted when she was 11 years-old and this is the first time she’s ever spoken out about it. She expresses how terrified she is of being around men and how much she doesn’t want to do the challenge.

Jay is sympathetic but says she needs to deal with this problem. Now to my knowledge Jay isn’t a licensed therapist and therefore should not be giving  Kayla advice to throw herself head first into a commercial where she feels uncomfortable to “get over” her assault.

This whole scene is very uncomfortable and pretty shocking to watch. The girls have to pick a hat for a challenge and rather than choosing the offensively stereotyped African hat, contestant Yaya decides to go for a cowboy one.

The judges all lay into her for wanting to prove her “Africaness” and then get annoyed when she doesn’t pick the one that can make them prove their point. She attempts to educate them on the offence of the hat and yet Tyra says she’s getting defensive and it isn’t “attractive.” Tyra also calls Yaya “condescending” when Yaya is trying to defend her culture and not wanting to reduce it to a stereotype.

“I was rooting for you!”

This classic moment has made some great memes, but you know what when re-watching it, something just doesn’t sit right about it.

Yes everyone should take a contest seriously, especially when so many people would love to be in that position, but shouting at a woman for not acting how you wanted her to is your problem Tyra, not hers.

No one deserves to be shouted at like that and yet Tyra felt she had a complete right to do so because she said she “cared” about the model, and so she was entitled to shout at her.

•Calling time on Jameela Jamil and her toxic brand of feminism

•I’m sorry to tell you this but Angus, Thongs and Perfect Snogging is completely messed up