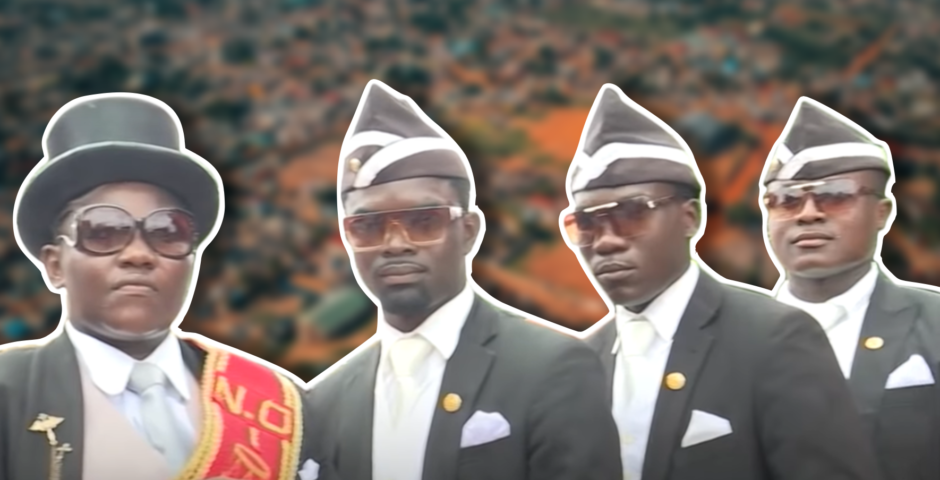 Everyone has seen them. The skateboard trick gone wrong, the boyfriend making a risque joke to their girlfriend – sometimes it’s as simple as someone who’s about to completely deck it. Whatever the video is you can bet that, in 2020, it is followed by the same people – the dancing pallbearers.

For those not familiar, the dancing pallbearers meme is used as a reaction video when someone does something life-threatening and/or generally considered really fucking stupid. Literally the trend is one whole “insert dangerous video here”, and now it has found renewed meaning with the coronavirus outbreak. But where did the dancing pallbearers meme originate? And why has it become such a global trend?

Where did the dancing pallbearer meme come from?

The dancing pallbearers meme originated from a 2017 video that BBC did, documenting a group of Ghanian pallbearers who offer funeral services with a difference. To lighten proceedings, they dance with the coffin with a choreographed routine and music.

Apparently their popularity was rapidly increasing at the time of the video being released, so who knows how many people are now paying huge amounts to send their dead relatives out from the world in style:

I wonder if the person in the coffin knew that they’d ever see this level of fame. Either way, the idea is brilliant, and it certainly beats a quiet and mournful hour in a cold church. And how much does the privilege cost? According to The Daily Mail, prices in South America, where this is also increasingly popular, were up to $1400 in 2014.

Since then, the video has turned completely viral, especially on TikTok, where it has been used largely as a reaction to videos relating to the coronavirus pandemic. In one case, some NHS workers even got in on the action (and hot water) for recreating the meme with the “corpse” of a patient.

The BBC has since returned to speak with the leader of the group, who told them: “This video has helped me a lot. I have gained personality. My personality has gone high. People are trying to see me, people are calling for interviews.

“This pandemic [has brought] my business down. It has come to a standstill. We don’t do business now, and I feel very bad. And then I know after this pandemic, we are going to go around the world to teach people what we do. They will know how we give respect to the dead.”

Dancing pallbearer workshops coming to a campus near you. Anyway, here’s some of the best examples of the dancing pallbearer meme – watch out, it’s practically a “people being hurt” compilation:

• These 23 did it work memes absolutely worked