One of them dropped out of uni to move in

Before Boris gave us our marching orders to schlep back to our parents’ houses and wait out lockdown, you probably made elaborate plans with with your housemates about how you were going to make a joint TikTok account and become TikTok famous together doing dances, comedy sketches and all sorts of other trends. Well I hate to break it to you but a group of teens are already way ahead of you. Introducing the Byte Squad, a band of six young TikTokers all living in the same house in London, and the UK’s answer to the American Hype House.

The Byte Squad is made up of the kind of people you’d expect – they’re ambitious, have cool hair, and spend their days filming skits for a millions of followers. The group had been sharing a London house for three weeks, and has now upgraded to an even nicer London house, complete with ensuite bathrooms and a balcony. When I sit down to chat to three of them over Zoom and ask what it’s like, one of them says: “Our days are unpredictable. One minute we’re having breakfast, the next there’s a million Orbeez flying round the room.”

The group is the brainchild of mastermind management FanBytes, who separately managed all the members at the start of their TikTok careers before suggesting they all move in together.  Jake, 22, was three months into a business degree at Nottingham when the choice was put in front of him, Katy, 19, was working at a restaurant having dropped out of school at 16, while Monty, 17, had unconditional from every uni he’d applied for.

“I really wanted to go to Portsmouth and do interior design,” he says. “After that I had a phone interview for Coventry Uni and they gave me an unconditional offer as well. I was set on going. I didn’t see that social media could be a proper career until these opportunities came up and I started putting in the work. Then this offer came along, so I’m taking a gap year now.”

Day-to-day life sounds simple: get up, have breakfast, make content (possibly with some assistance from a company card). Although she doesn’t doubt money has been thrown at videos that have flopped, Katy says: “Our management basically looks after us and pays for it all because they want to see the crazy content we make so they’re like ‘yup, do it’.”

“We’re always ordering different props to use in our videos,” says Monty. “Yesterday we were just building massive towers of red cards then we filled the pool with Orbeez.”

How many TikToks a day, then? Jake says he himself records between six and nine, but sometimes will film over 30 videos in a day. Katy says the Byte account posts five times a day, usually, in addition to the odd YouTube video, which all adds up to a fuck of a lot of content.

Katy says the group meets every Friday to set goals for follower growth and Jake estimates the group account has racked up over 15 million views (by the time you read this that number will most likely be wildly outdated).

“We set targets ourselves for what we want to achieve,” explains Jake. “One day we decided we wanted to get our Instagram following massive. Yesterday on Insta we doubled our following.”

Monty adds: “We set those boundaries for ourselves because we want to have fun but we also want to make sure we’re getting the good crazy stuff out there and not mediocre stuff. We want to be top tier crazy so people are hooked and interested.”

The group point blank refuses to tell me how much money they’re making (“we’re full time influencers, just take it at that), but what’s the end goal here?

“We want to get into TV!” Katy adds, excitedly.

The group already films reality TV-esque skits, but Jake says the plan is to eventually pitch them to TV networks.

Living in a house where TikTok is the all consuming priority seems exhausting, but Katy says the job isn’t exactly a nine to five. She explains: “When we get up we’re quite like ‘we want to do this today’ and then we have a livestream at 6:30pm, but that’s the only thing set in stone. We normally stop at 7:30-8pm.”

The best part about reading into similar content houses are the ludicrous rules that usually involve forcing YouTuber wannabes to be up filming by 10am every day or risk a fine, but the Byte Squad are keen to tell me they’re not about that, saying “there are no rules” in perfect unison when I ask them about it. But what if I wake up one day and just ~don’t~ want to make a video?

Monty says: “We’re not forcing anyone. Like, obviously everyone has their bad days so if they’re not in the mood to film we’re not going to make them.”

“We all share the same goal, so if someone’s got a problem we’ll comfort them and make sure they’re alright,” says Jake.

I try and be more direct: How do you get kicked out? The group basically tells me if a member “caused a controversy” i.e. did something hugely racist or homophobic there would be a problem, but it’s unlikely.

“We’re the most diverse group in the world,” says Jake.

The group tells me they’re keen to get more influencers in once lockdown eases up, but when I ask if they’re allowed to have people over and get hilariously pissed. Monty replies: “We have games nights.”

Speaking of lockdown, did the group not break lockdown rules to move in together in the first place? “Oh no,” says Katy. “This has been something we’d been discussing for a really long time, so it’s been planned for a while. When we heard something was happening we didn’t want to break any rules so we just moved in mid-March – a few days before Boris announced lockdown.” 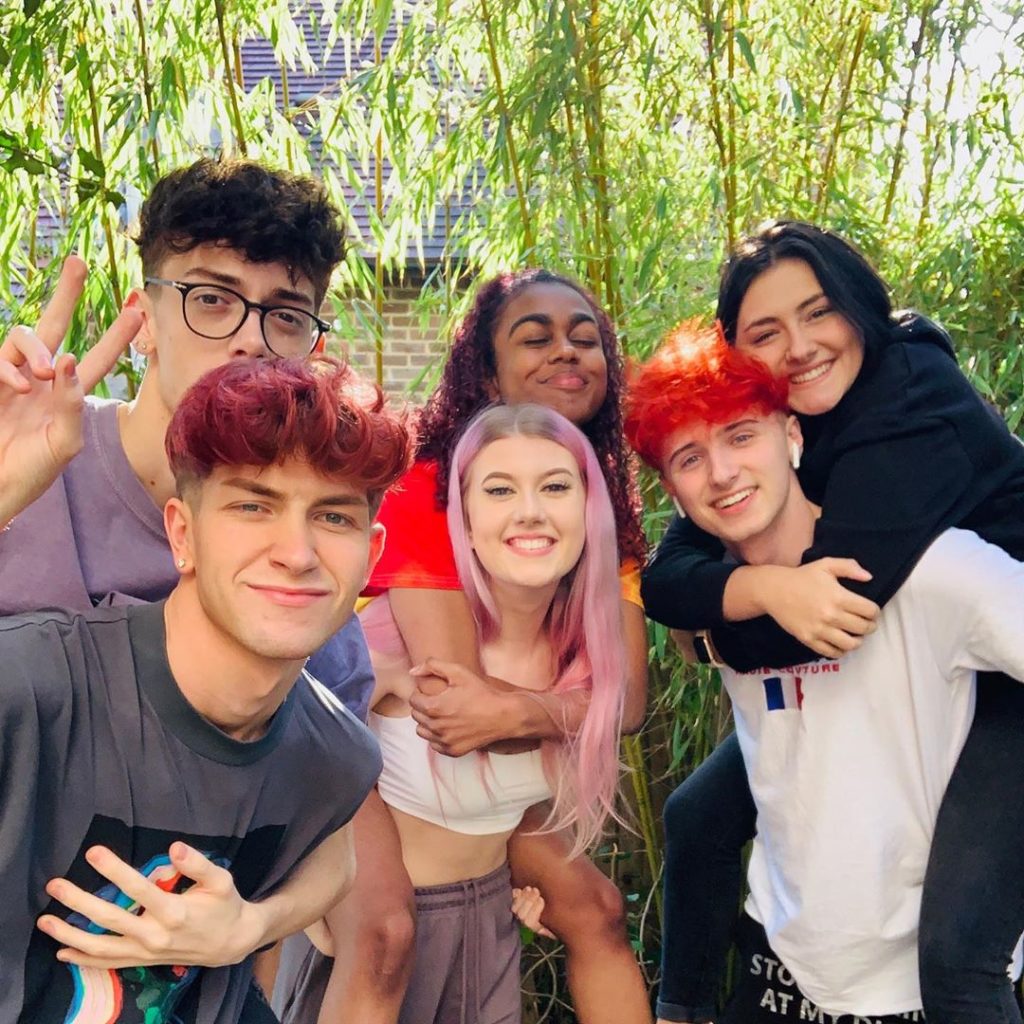 What do their parents think of it all? Jake says: “My mum absolutely loves it. It means I’m not pranking her anymore. She misses me here and there, but she rings me.”

“My parents are pretty cool with it,” adds Katy. “They think it’s cool I’ve left the house.”

• 11 TikTok dances you need to learn while in quarantine