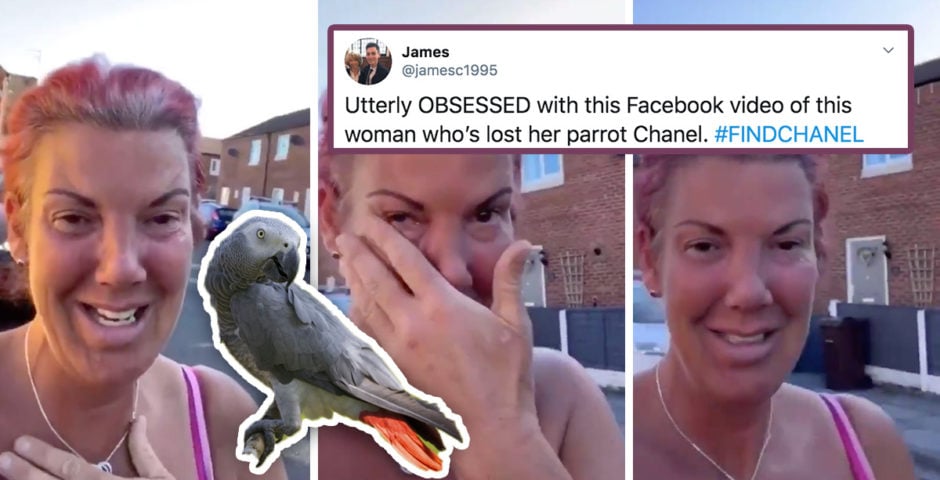 Ok so who is Chanel the parrot and why is everyone on Twitter looking for her?

If you’ve gone on Twitter or Facebook today and seen everyone talking about “Chanel” and wondered what the hell you’re missing out on you are not alone. Chanel is actually a parrot, and is the subject of a huge manhunt.

Yes, the entire population of the UK paused this morning to find out on earth was going to happen to Chanel after her owner posted a video saying the bird had gone missing. It was tense, the memes were incredible and for once, the ending was happy.

Here’s an explainer on everything that went down in the Chanel the parrot saga.

Why is everyone on Twitter talking about Chanel the parrot?

The world went crazy today when a woman called Sandra posted a video on Facebook saying she’d lost her parrot. She was calling out for local people to help her chase down the bird, who was heading towards their local canal. But everyone wanted in on the search and soon the video was a viral sensation and #FINDCHANEL was trending.

She then goes on to explain that Chanel is an African grey parrot. Sandra says she heard a noise from a neighbour and flew away, out the garden. Watch the full video here, it’s iconic:

And then Chanel the parrot became a meme, obviously

The video and subsequent search for Chanel then got turned into some even more hilarious memes. Chanel is everywhere and we can’t get enough of it.

Chanel escaping the house and flying to the canal pic.twitter.com/k3fUJx1FKo

My next Celebrity Big Brother Line Up

Here’s an entire roundup of classic Chanel the parrot memes.

But fear not, because Chanel the parrot has since been found!!!

It seems as though this story does have a happy ending as, in another video uploaded on Facebook and Twitter, it’s been confirmed that the nationwide search was successful. Chanel has been found. Chanel’s owner posted another video where she said: “It’s Chanel we got her back. We really got her back. I want to say a massive massive, I’m shaking, massive thank you to every single person on Facebook because if it wasn’t for you we wouldn’t have found her.”

And there are even more wholesome videos of the parrot at home and to be honest, I’m obsessed.

Chanels full name is “Chanel Chanellington” i don’t think i could be more obsessed 😭 pic.twitter.com/GKS9tvQWOF

So there you go, if you were confused as to why the whole world seemed to pause today to find Chanel, now you know.

• Please, everyone, share these 23 memes about Chanel. She’s gone towards the canal!

• Ok so just who is this viral ‘giant baby’ everyone has gone wild for?