You’re also not a bad person for donating a fiver!!!!

In one of the weirder push notifications of my life, my iPhone flashed on to say that my screen time had decreased by a third this week. It wasn’t broken – I simply had been barely opening Instagram. You can’t move for challenges: acquaintances downing pints while their family sit out of shot (presumably full of regret for picking their child up from uni) or doing the barely-legible 30-day song challenge. All the fun of early-days Facebook, except now you’re old and cynical. One challenge, however, stands apart – everyone running 5k, donating a fiver to the NHS, and nominating five mates. It’s everywhere.

So far, it’s raised £2.9 million for the NHS. If everybody’s donating a fiver, that’s around 580,000 individual acts of generosity. Staggering. Somehow, despite the heart-warming qualities of these facts, people aren’t completely on board. Watching the Instagram stories feels odd. 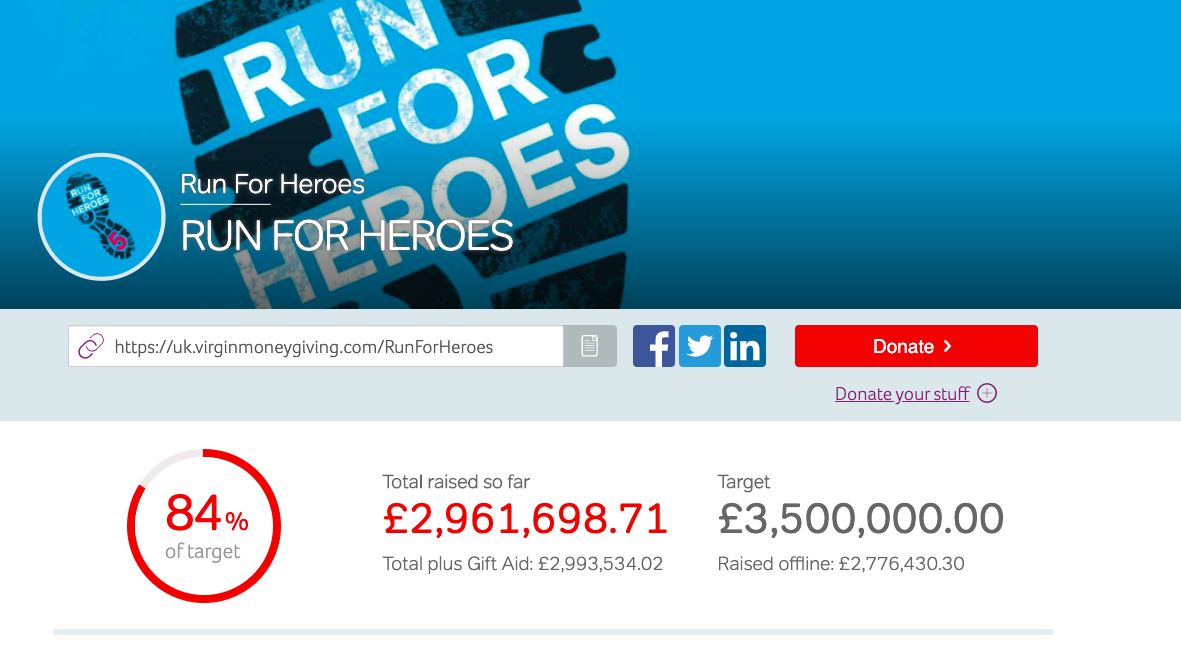 Maybe that’s you, feeling like a bit of a twat for even feeling uneasy about it. Like nothing’s ever good enough. Your brain’s been melted so much that you look at people coming together and feel sick. Naturally, you worry that when this is all over, this will become a test. Job interviewers will ask what you thought of the Run For Heroes. Unable to convincingly lie, you’ll mumble something about “every charity is a failure of the state, I don’t know”, wet yourself, and run out of the interview ashamed. It makes total sense for you to think the NHS isn’t a charity, and you’re not an evil person for thinking it.

Anyone else concerned that treating the NHS like it's a charity is pretty fucking dangerous?

Money raised for the Run For Heroes fundraiser is directed towards two main areas: providing items for NHS staff and volunteers’ wellbeing, and covering their travel, parking and accommodation costs. If we agree these things are worth funding and paying for, as they surely are, then it seems strange not to ask why they aren’t already being paid for. In case it needs spelling out, you’re already doing your bit, funding the NHS through paying taxes. It’s fine to do extra in exceptional times, of course. But taken together, is this an acceptance these things shouldn’t be paid for in normal times? Do the hundreds of thousands of Strava and Nike Run screenshots add up to being okay with how things are? Raise, donate, charity – bluntly, it’s a failure that these words are coming to be associated with the NHS. They’re too flimsy – the NHS is an obligation, the people who keep it running too important to rely on the brittleness of such words.

Part of the reason any challenge to this effort feels wrong, as though it will accidentally come out of your mouth like an attack on the NHS, is that, yes, each donation is a good thing. Even if it’s a tiny difference to the NHS’s £140-odd billion budget, it’s quite obviously better to do it than to not. Think of the small things people do to help climate change – you can argue paper straws and keep cups are meaningless, but wither whenever someone points out that they are at least doing some good. Perhaps.

A study published last year argues that smaller climate change initiatives – “nudges” – which take relatively little effort and make a small, but nonetheless positive, difference, may actually be counterproductive. The paper, titled “Nudging out support for a carbon tax”, showed that introducing a small way for people to make a difference to climate change – the “nudge” – reduces their support for a carbon tax, a more significant solution to the problem. Whilst the two situations are not perfectly analogous, we do risk running into that problem here – that making small charitable donations to the NHS ignores the wider, more significant issues to be tackled. Granted, sniping at people for doing a good thing isn’t going to help either. But, the authors of the paper conclude that the nudge may still be useful, as long as people are made explicitly aware of its relatively small impact.

In the face of feeling helpless, it’s totally understandable to do your bit in any way you can. Frankly, any way to feel united is welcome and these challenges are quite possibly the kind of gesture which is holding the social fabric together. Those feelings are valid.

But a sense of perspective is needed – and pointing this out isn’t mere sniping. Like the “Clap for Carers”, the Run For Heroes is a good thing, but alone is not enough. When this is all over, everyone will sing the NHS’s praises and say how important it is. No politician will pass up the opportunity to lay it on thick for the National Health Service. Whether anything changes depends on if we demand more than those words and sentiments, more than a £2 million charity top-up to the health service’s £140+ billion annual budget. We can’t stan the NHS into the state we want it.

Yes, the individual act is good. Yes, raising money for the NHS is good. People feeling good about doing so is a good thing. But also: perhaps this mass charity is a symptom of something gone badly wrong, and if we accept that without really thinking about it, it might unwittingly make things worse in the long run.

You’re allowed to see the old man walking around his garden and celebrate the generosity and kind-heartedness, whilst also feeling a bit ashamed that it was even necessary in the first place.