The coughing is SO obvious?!

Right now, all everyone can talk about Quiz on ITV. The drama series tells the story of one of the UK’s biggest TV moments – the coughing scandal on Who Wants To Be A Millionaire. After watching the show, everyone is desperate for the full real Millionaire episode with Charles Ingram to be aired.

The scandal included Charles, his wife Diana and their third accomplice, Tecwen Whittock. In 2001, Charles was in the show’s hot seat playing for one million pounds with his wife in audience. Also in the audience was Tecwan, who was accused of coughing when he heard the correct answers, aiding Charles to win the jackpot.

Here is the full Who Wants To Be A Millionaire episode, cut up into clips, where Charles Ingram won the million. If you can’t be bothered to watch all the clips, there’s a five minute summary video at the end of this article.

Charles gets the fastest finger first question right in just under four seconds, a full half a second faster than his nearest rival.

Introducing Charles Ingram to the show

Charles Ingram is introduced onto the show as a Major, serving in the Royal Engineers. Chris Tarrant also introduces Charles’ wife, Diana, who is his guest in the audience. Chris points out that Diana has already taken part in the show and won £32,000 and as did Diana’s brother, Adrian Pollock.

He struggles on the £4,000 question and has to phone a friend

Charles struggles early on and just about manages to get to £4,000 when he’s faced with a question about the River Foyle. He says he’s “never heard of it” and phones a friend. He gets the question right, but then the show is over and he has to return later in the week.

Skip to around 4 minutes in the video below to continue to Charles’ second night in the Millionaire hot seat. Let the coughing commence.

Charles is only on £4,000 with one lifeline remaining. He suddenly says he has a “strategy” and was previously talking himself out of answers he did know. He says now he is “going to go for it”. The first audible *cough* is literally in his first question back. He goes on to famously say he’s “never heard of” Craig David before being “sure” the answer is that.

After choosing Craig David he’s up to £32,000. Then he’s insistent on questions that “it could be any” of the options so he has to read them all out loud. The coughs are all of the place.

At this point, the producers must have been shaking. This guy who lost all his lifelines early on and scraped his way to £4,000 is now minutes away from the million pound question. Chris Tarrant can’t believe his eyes and the coughs are more deafening than ever.

And here’s *that* incredible one million pound question

Charles was asked: “A number one followed by one hundred zeros is known by what name?” First he “thinks it’s a nanomole” but it also “could be a gigabit”. He says he doesn’t think he can do it, and has never heard of a Googol. But then suddenly there’s a cough from the audience and he says “by process of elimination I actually think it’s a Googol”.

He says he’s going to play and his wife Diana is absolutely shook. Of course, Chris Tarrant goes to a break before the show is back and it’s announced that Charles Ingram is a millionaire. It’s absolutely insane scenes and the crowd goes wild. 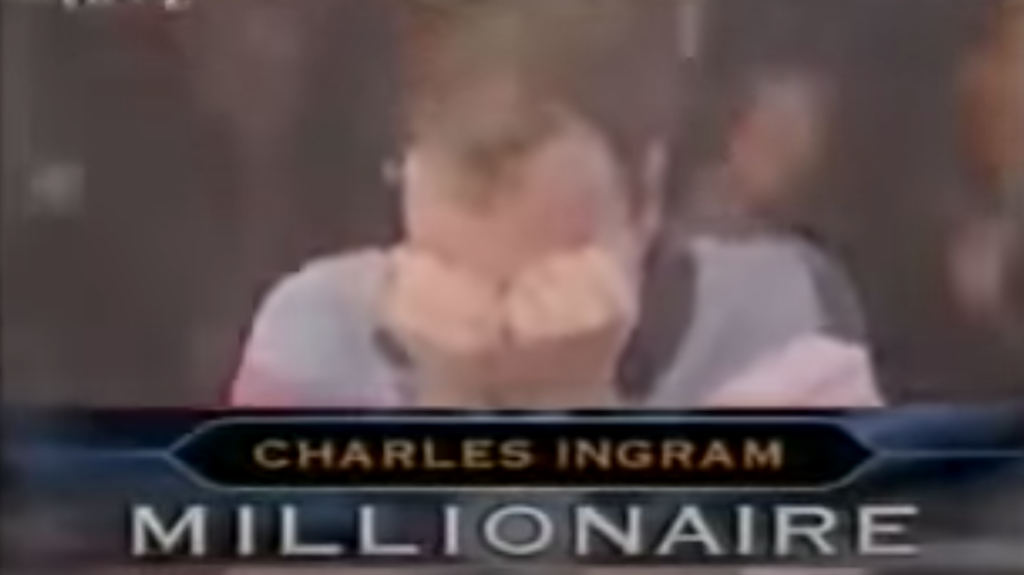 If you can’t be bothered to watch the full Charles Ingram Who Wants To Be A Millionaire episode, here’s a five minute summary:

With some lovely voice over from Chris Tarrant.