When Boris Johnson shut all but the most essential shops in the UK, he crucially left the supermarkets open so people could keep buying essential items. Suddenly, students who’d signed up to work summer shifts in Tesco, Aldi, et al found themselves recategorised as “key workers” and are now dealing with panicked, desperate, and sometimes obnoxious shoppers on a day-to-day basis.

While trying to make sure customers are sticking to social distancing rules, these students have had to contend with abuse being hurled at them, watching customers raid cages and delivery trucks for loo roll, and some have had to intervene when they attack one another for products.

We spoke to dozens of students working in supermarkets up and down the country, many of whom asked not to be directly identifiable and risk losing their jobs. These are just some of the maddest things they’ve seen:

‘One lady had eight milk bottles in her trolley’

“There have been a couple of customers getting angry at us withholding stock or getting upset because they can’t buy more than the three-item limit,” says Harry, an MMU student who works in Tesco. “For example, I approached a lady who had eight bottles of milk in her trolley. I said she wouldn’t be able to get all of them and she had a go at me saying how would she survive a lockdown with only three bottles.” 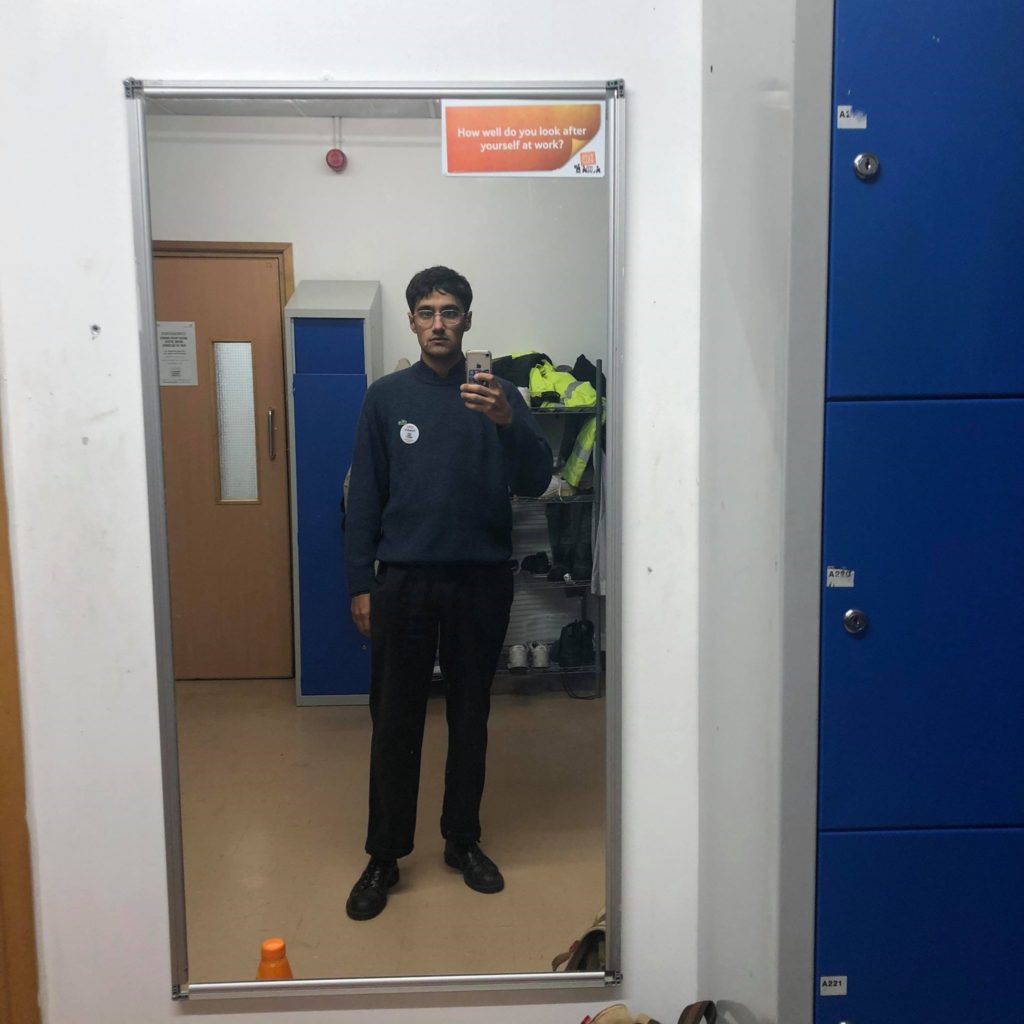 “I informed her that there would be NHS workers that wouldn’t be able to get any milk at all if she bought eight for herself then she put them back.”

“Tesco’s pretty full-on tbh,” says Beth from Durham. “There’s quite a lot of pressure to work long hours and a lot of shifts. But it gives me something to do in my break and it’s good money.”

Beth told The Tab she saw one lady trying to buy 20 bottles of water at once, saying: “I don’t really know what she needed them for but given they’re restricting to three items she was pushing her luck.”

‘Someone tried to assault a colleague’

Elise, also from Durham, says working during the pandemic has been “mental” and the shops have been full of “so many rude people.”

“They think all the safety precautions are just an inconvenience,” she told The Tab. “Someone actually tried to assault one of my colleagues for not allowing them to buy more than three alcoholic beverages.”

“Never in my life have I seen so many grown adults get so frustrated and agitated over lining up outside a Sainsbury’s,” says Liv from Manchester. 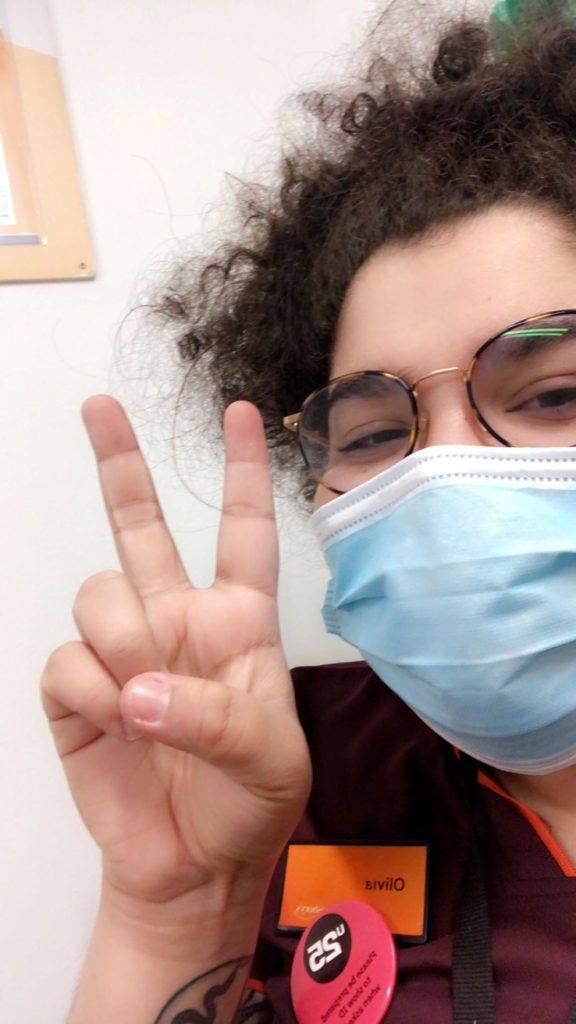 Liv was one of several students who The Tab overstocking has resulted in a lot of food waste, most of which is mitigated by a support worker who distributes them to the homeless.

“The maddest thing I’ve seen is a guy come in to do his full shop in a full hazard suit with a face shield and massive washing up gloves on – looked like some Breaking Bad kinda shit,” she said. “Other than that someone trying to cut the line for a Snickers and some chewing gum when there’s like 10+ people waiting to come in for essential items.”

Pierce, from Liverpool, works in Tesco from four in the morning till as late as midday. She told The Tab: “The work is good, good pay and managers aren’t stressful, but customers are stupid. We have social distancing measures in place and many customers refuse to abide by simple tasks.

Pierce says the panic buying early on was “ridiculous,” and has had a knock-on effect for stocks.

“Now that loads of customers are sitting at home with hundreds of loo rolls we now have so much loo roll stock and not enough people are buying it,” she said.

Cardiff student Sean was supposed to be on his year abroad. But it was cancelled due to COVID-19. Now he’s working at his local Co-op. He reckons the situation is improving.

“It was hard a couple of weeks ago,” he told The Tab. “Really busy and people shopping ridiculously but we’ve started to see some change. People being more responsible and even politer too.”

Sean says he’s seen customers wrestling items off delivery cages, others “arguing in the queues to obey the social distancing, and “people covering their faces with tea towels.”

“The pure amount of stuff that’s being delivered to the store and bought and is out is stock etc is crazy,” says Stuart, from Manchester. “A lot of empty shelves, which is strange. And customers who seem frantic, being really rude to staff and kicking off because they’re not allowed to buy eight packs of toilet roll.” 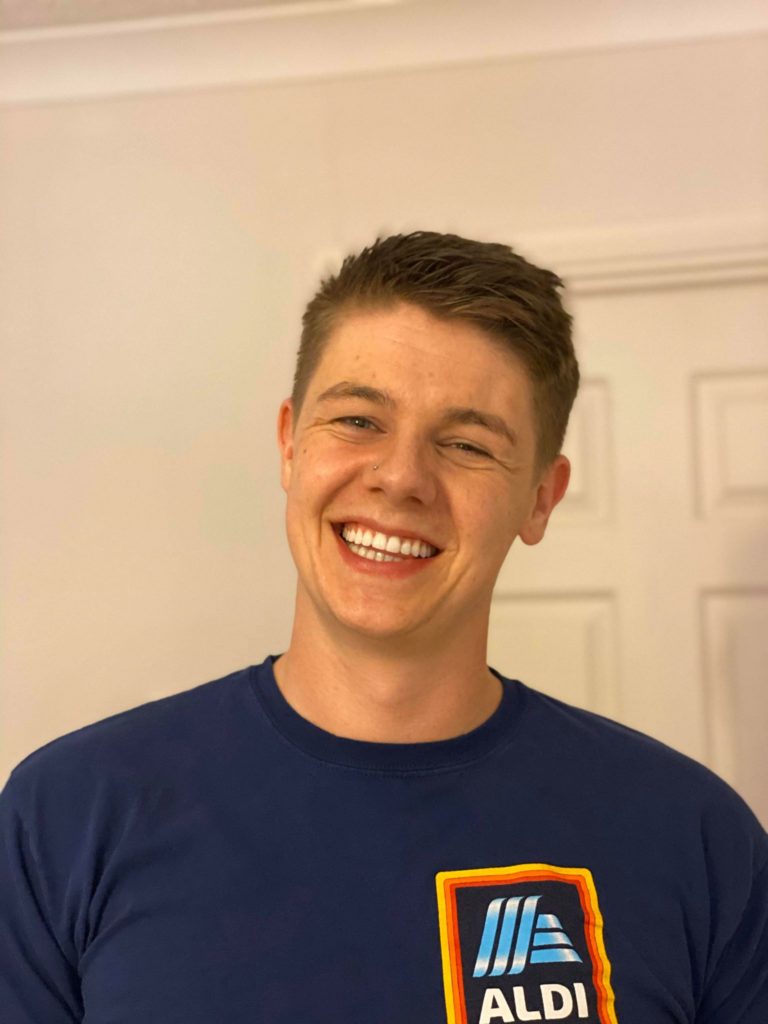 He said the strangest thing he saw at his Aldi was “a shoplifter who was caught and starting using the 2m rule to keep anyone away from him while he walked out.”

“My store hasn’t been too bad with aggressive customers but likely to be because we have hired around 10-15 security guards (a lot of ex Cardiff town bouncers) on the door,” he says.

Andrew told The Tab the supermarket has a one-way entrance and exit system, and when one couple was told about it they simply said “what’s the point?” and left.

‘Apart from capping the numbers, it’s basically business as normal’

“Apart from capping the numbers who are in store, it basically is like normal,” says Harry, a Durham student who works in Waitrose. “In terms of demand, online deliveries are still busy, similar to the run-up to Christmas.” 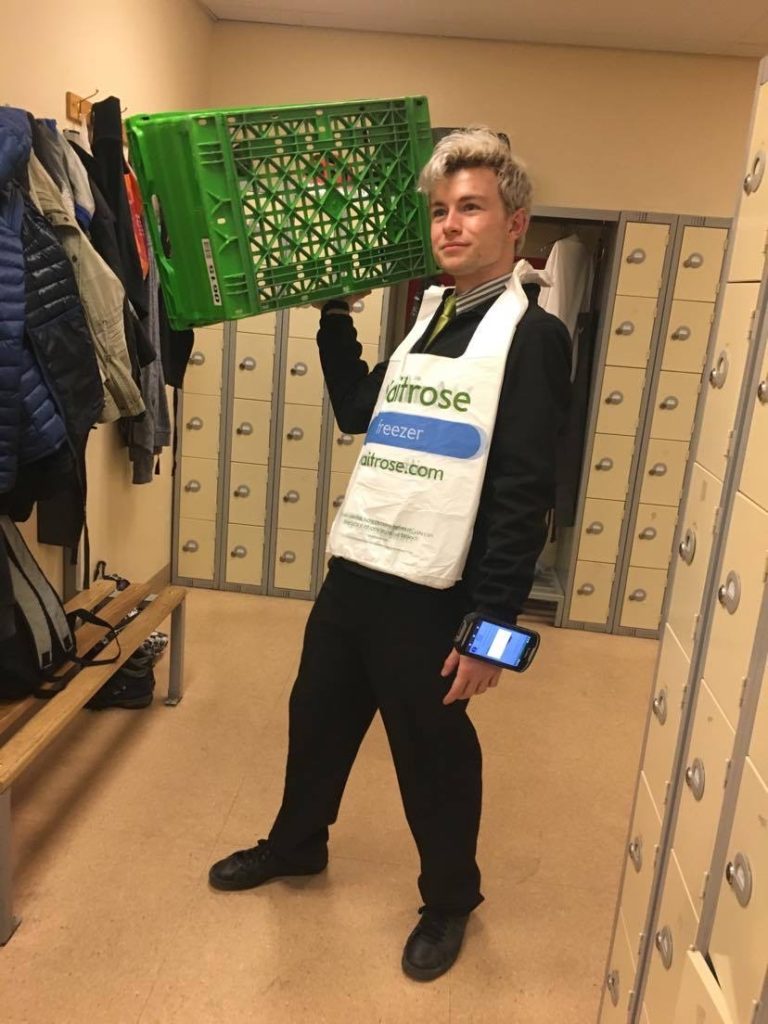 He added: “They’re still letting couples into the shop (as of Saturday) and the other day when I was stacking shelves, management sent over 2 more people to my cage which was just ridiculous considering social distance.

“My parents weren’t keen on me working from the beginning because of the increased risk but as I work on the deliver section they kind of really needed my help. So I felt like my job was pretty necessary as the supermarket has been prioritising deliveries to the elderly and vulnerable.”

‘Someone coughed at me’

Olivia, another Durham student, is also spending the Easter break working at Waitrose, she told The Tab: “It’s been manic tbh… high highs and low lows.” 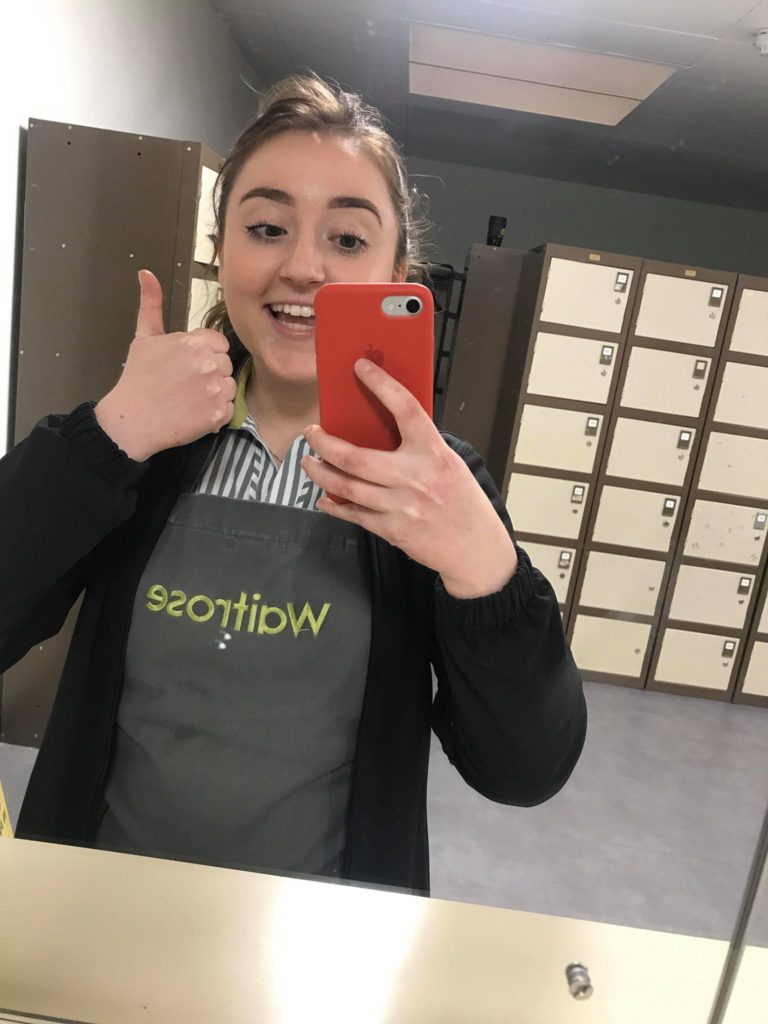 “The general public has been so lovely but also vile. I’ve been yelled at and sworn at for things out of my control. Someone sprayed my hands with their own sanitizer,” she added. “People also cough on me.”

’75 per cent of people are lovely, it’s just the 25 per cent swearing at us and saying it’s pathetic that’s frustrating’

Jordan from Manchester has been working on the doors. He says his shop has been letting 150 in at a time – one in, one out.

He told The Tab: “We’re doing all we can to follow guidelines. I’ve not seen my dad, brother, boyfriend or my baby nephew, but I come to work and see people browsing the store looking at clothes and buying new TVs and other non-essential items. I can’t imagine how much strain the NHS staff are under just because people want to have a social shop and pick up a new turtle neck.”

Jordan says the most annoying thing is households splitting up to meet in the shop later, which deprives other households of necessary products.

‘There’s an old lady who comes and blasts Elvis songs from her car, stands outside, and dances’

Izzy, also from Manchester, says people getting too close is “frustrating,” but says Tesco has made her feel safe.

“There’s an old lady who comes and blasts Elvis songs from her car, stands outside and dances,” she told The Tab. “She must be late 80s and it’s nice to see her trying to lift everyone else’s spirits.” 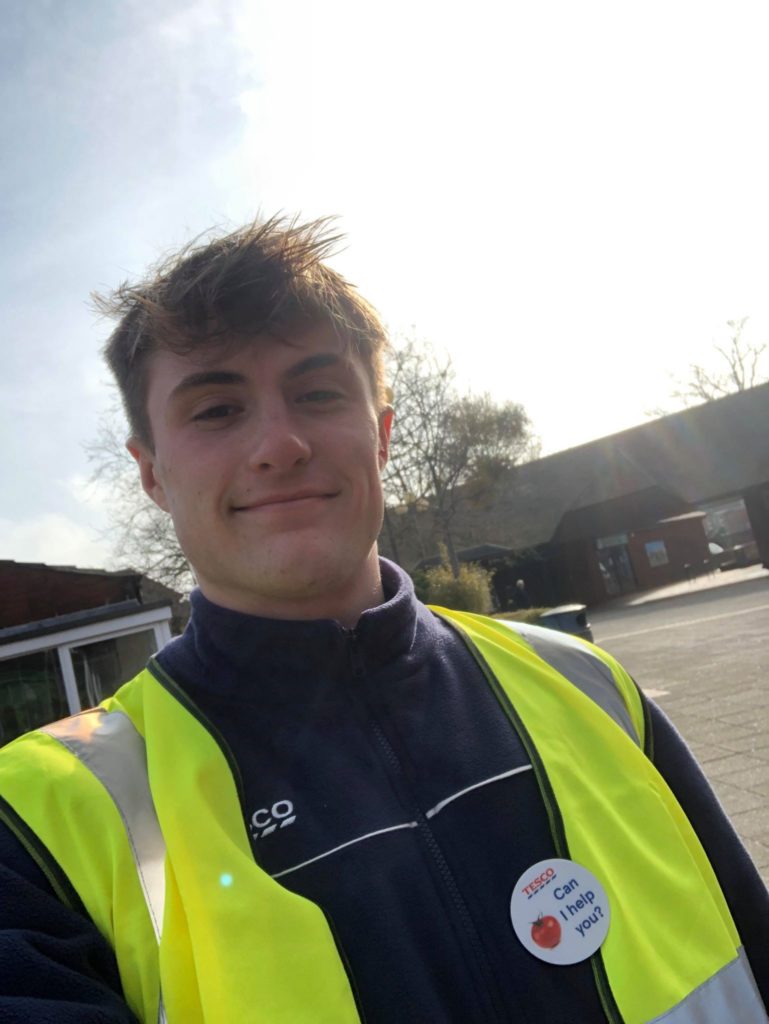 Louis from Cardiff told The Tab the Tesco he works at has a 110-person limit and said he’s seen them “grabbing items straight off the delivery truck around the back of the store before they’ve been put on the shelves.”

“I saw people kicking off today about the special hour for elderly and NHS because they can’t come in for their shopping,” says Sabrina, an Exeter student working at M&S. “I’ve had customers shouting at me because they say I don’t care about my life by being here – but they’re here shopping!”

Sophie, from Lancaster, told The Tab the initial two weeks of panic-buying kept the morale in her Asda high, as sales were up 300 per cent. She said most customers were “respectful” and some even said thank you.

“One even bought me some KitKat bunnies through my checkout and gave them to me which was so cute,” she added.

As lockdown has dragged on, however, most customers “give less of a shit”. Sophie said: “They’re not staying two metres away, most are wearing masks or makeshift masks and they’re still being polite but social distancing has gone to fuck and colleagues are getting annoyed by the lack of shits the customers give.”

Like others, she says also says panic-buying has resulted in overstocking and food wastage, describing how groups of people would gather around when products were being marked down.

“This group stood 1m radius around us lol and we were like please stand two metres away multiple times and they’d shuffle back and then creep forwards again,” she told The Tab. “They were there for an entire 10 minutes whilst we did the whole thing.”

Lydia, a Manchester student working in Sainsbury’s, says the weirdest moment came when she went to put more toilet roll on shelves. She said: “I left the roller in the aisle and then went into the back to get a bag to put the rubbish in and when I came back everyone had helped themselves.

“Apparently some guy had gone mad and tried to take loads, a woman told him he wouldn’t be able to get them through the till because of the limits and he screamed at her, so she was crying at the customer services desk.

“It was all very dramatic, I didn’t realise I’d have to babysit the toilet paper.”

• Suspend your studies if you don’t have a laptop, Uni of York told its students